Even though “Hell Bent” is as unrepentantly sci-fi and literal as “Heaven Sent” is allegorical and rich with subtext, even though it’s as chaotic and messy and all over the place as its part 1 is focused and precise, I loved it. I don’t know if it’s the best episode of the season, but it might be my favorite. To discuss the many scattered reasons why, let’s turn to an old format for finales and take it 5 minutes at a time.

The diner framing device is beautiful and sad, as it should be. It’s also a classic Moffat fakeout, because of course our first assumption is that this is a Clara echo who, like the others, has enough instinctive affinity with the Doctor to accept a song as payment, but doesn’t know who he is.

About that song: I haven’t always liked Clara, but I’ve always liked her theme. It’s one of Murray Gold’s best things.

The Sisterhood of Karn have been linked to Gallifrey since their first (and, until very recently, last) appearance in “The Brain of Morbius,” but it’s still kind of goofy that they’re here. Not that I mind. They’re fun.

I love the Doctor’s ancestral barn. I love that this is the home he comes to now on Gallifrey. It isn’t just a beautiful set with a lot of resonance after “Day of the Doctor” and “Listen,” but also it fights against the Doctor’s patrician roots (as a “highborn Gallifreyan” according to Ohila). Whatever the circumstances of his childhood, he has come to identify himself with the “common” people of the planet. They may treat him as visiting royalty, but are also willing to shield his life with their own. The scene where the old woman it belongs to recognizes him despite his new face is gold.

Speaking of Gold, how about the incidental music? Shades of both Tron and Star Wars. Works for me.

They order him to lay down his weapons and he drops his spoon. The payoff from “Robot of Sherwood,” a long time coming.

We’ll know pretty soon that he’s been scheming to get to the Capitol for a while now, probably since he first entered the confession dial. He wants them to take him there. But he’s not going to make it look easy. First he ignores a gunship, then a squad of infantry, and finally a brace of High Council dignitaries… 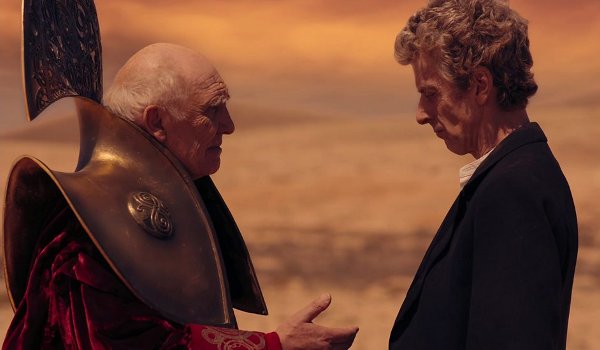 …before he finally gets Lord President Rassilon to come out personally. Here’s one of the few minor irritants of the episode: Moffat deciding to indulge RTD’s resurrected Rassilon rather than sweep him under the rug. He makes the best of it, at least, but it’s still so strange to have Rassilon around at all. He’s a figure from classic Who, both the architect of Time Lord technology and society and a legendary figure who traps prideful Time Lords who seek true immortality. It’s not completely antithetical to convert him into a petty, frothing tinpot dictator, but it really stretches the imagination. “Get off my planet” is a strange thing for the Doctor to say to the man who virtually built that planet…unless, of course, Rassilon’s status as Gallifrey’s founder is more reputation than truth. Regardless, I hope we’ve seen the back of him for a good long time.

“Stories are where memories go when they’re forgotten.”

The Doctor can only pull off this bloodless coup because of the respect he earned from his fellow soldiers in the war. This makes his beef with soldiers in Series 8 even more random; he’s essentially left the planet in the hands of the military, having run off the political class.

If the Doctor really did come up with this plan to rescue Clara soon after she died and he realized who was kidnapping him, it means that “Heaven Sent” was the beginning but not the end of the grieving process. If we believe in the stages of grief, we might say he did depression and bargaining, but is now doing anger and denial. It’s a bit out of order, but people say that can happen.

It’s during this five-minute stretch that we see the Doctor steal a gun and shoot an unarmed man in cold blood. Ohila’s later comment that he’s breaking all his own principles is on target: I’m not sure that he really needed to shoot the General to get away with the next steps of his plan. It does, however, provide “regeneration in progress” for the “Next Time” trailer, and it does provide our first onscreen cross-gender regeneration. It’s not clear whether Gallifreyans have our idea of race, but if they do, it’s also the first Time Lord cross-race regeneration. An argument could be made (though why would you want to?) that River and Missy were special cases, but the General is basic Gallifreyan.

Certainly he’s run for and won the office of Lord President in the (classic series) past, but here the Doctor seems to have reclaimed the title merely by showing up and exiling the previous one at gunpoint. 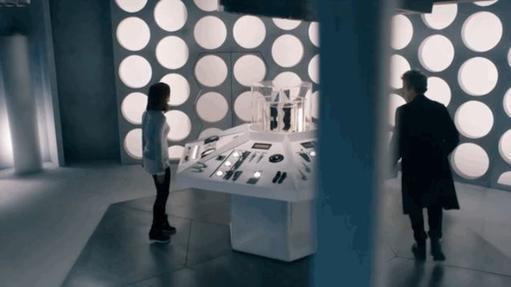 It’s not clear to me why wiping Clara’s memory would keep her safe. Surely if the Time Lords really wanted to find her, they could pretty easily track down one woman on one planet in one country and probably one city. They wouldn’t need to home in on her memories of the Doctor; Earth police work without telepathy all the time.

The Matrix, which I guess I didn’t need to explain last week since the Doctor did it this week, looks just a little cheap to me. It’s fun but not really clear why it would have any physical manifestation at all (or why it’s necessary to link that idea to the Cloisters, but whatever), and you’d think if it had one it would look a little less like an ordinary basement with some rope lights. I can’t decide if the Sliders are eerie or if they just make the whole place look like a haunted house amusement ride at a run-down boardwalk.

It’s kind of worth it just to see what it takes to get a Dalek to plead “exterminate me,” though.

Doubtless there are a bunch of fans who’re already hip-deep into figuring out the significance of the story about the Doctor “stealing” the President’s daughter — who she was (Susan?), who the President was (his son?), what the deal was with the moon (another egg?). It’s a cinch Moffat left it vague on purpose, though.

“I can’t be the Doctor all the time.”

I like that Clara’s important heart-to-heart with him here is unheard. The one in “Face the Raven” was a little much, and it’s better just to imagine the words you say when you find out someone has technically suffered for more than four billion years and many more deaths to have the slimmest chance to save your life.

I’ll always, always love the Doctor stealing a TARDIS and running away. Always.

That classic control room — it’s austere and maybe just a tiny bit boring, but it’s comforting. There’s something reassuring about how cozy it is, how few shadows there are, how it’s just the one level with no stairs or weird undercarriages. I’m glad to see it get redesigned every so often, but even now this still feels like home.

“Don’t you trust me anymore?”
“Not when you’re shouting.”

It’s surprising to see that Me is the most resilient immortal of them all. Maybe we can assume that Captain Jack was too reckless not to burn out eventually, but is the Heart of the TARDIS less powerful than a second-rate warrior race’s first aid kit? Maybe we assume, as I’ve seen people suggest, that Me has found ways to extend and continually renew its capabilities. Or maybe she’s just more careful.

Is she playing chess with herself? Does she already know the Doctor is planning to show up?

“Does it matter” if the Doctor is half-human? Probably not. There might, someday, be a third story where that question has any impact on the plot. But it will almost certainly not be a good one. 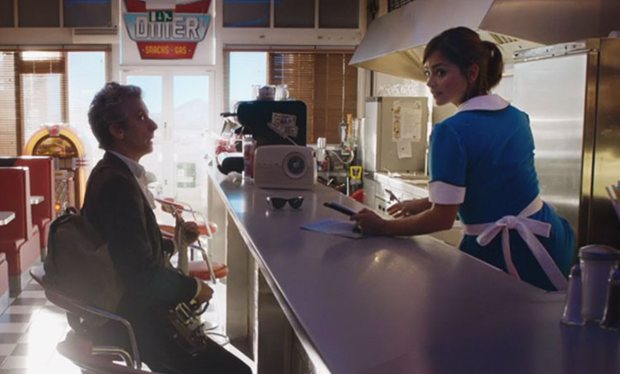 I’d forgotten that Missy gave Clara the Doctor’s phone number. And though “the hybrid is two people” is kind of a cheap way to fulfill a prophecy, a prophecy is a cheap way to drive a story, so whatever.

Whatever you’ve thought of Maisie Williams in her four appearances this season, she’s fantastic here and looks quite glamorous to boot.

People are saying that the Doctor allowing (or appearing to allow) Clara to disappear from his memory rather than vice versa is “Donna done right.” I can see where they’re coming from, though I think it’s praise rather than criticism to suggest that the RTD era wasn’t afraid to let the Doctor make morally problematic choices.

If you are cruel or cowardly, and we all are sometimes, make amends. I love pears, though, juicy or not.

The Doctor says “I became the Hybrid,” so in his mind at least he’s only entertaining two of the presented possibilities.

And of course here’s where we find out it’s a fakeout: that it’s the Doctor who doesn’t remember Clara, not the other way around. It had to be this way: he’d never have the strength to carry on and pretend she didn’t exist. Of the two of them, she’s the only one strong enough to do it. Beautiful and sad.

“Memories become stories when we forget them. Maybe some of them become songs.”

It’s lovely to have Me and Clara in the TARDIS, the immortal and the undead, having adventures together. I’m a fan.

And with this Moffat has in one way cheated and in another satisfied all of my companion departure complaints. On the one hand, he’s killed her. The universe depends on her death; sooner or later, they’re going to have to go back to Gallifrey and put her back. And on the other hand, she’s found the strength to leave the Doctor by choice, and presumably to go pursue her own cause: traveling the universe herself, most likely righting wrongs the way the Doctor did, trying to keep Me out of trouble. That diner traveling in time and space is pretty much perfect. I can’t even guess how many thousands of words of fanfic have already been written since Saturday night.

“Run you clever boy…and be a Doctor.”

A new sonic. Rigsy’s loving tribute flaking off in a blizzard of paint. And he’s gone. 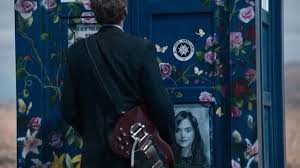