The latest two-part adventure sees a very different kind of Doctor, as he leaves his Timelord DNA behind to become a human and all the passions and frailties that come with that. Seeing him scared, completely happy and in love will come as a shock to Whovian fans, but it really gives David Tennant and the writer, Paul Cornell, the chance to show a different side of the character, if all the pressure of being the last of kind was taken away.

The biggest change is seeing the now John Smith fall in love with the school nurse Joan Redfern and how he conforms to the courting rituals of 1913, as he mumbles through an invitation and tries his best to dance. This shows how good an actor David Tennant is and how even the Doctor wants what everyone wants: the chance for a normal, happy life.

Aside from David Tennant’s excellent performance, the two-part story also has first rate ensemble cast to support him. Jessica Hayes (Stevenson), best known for her role as Daisy Steiner in the cult Edgar Wright/Simon Pegg show ‘Spaced’, is John Smith’s love interest Joan Redfern. The role gives the actress the chance to show that she can play the more dramatic role and you could easily believe that John Smith or even the Doctor himself would fall for a woman like this. 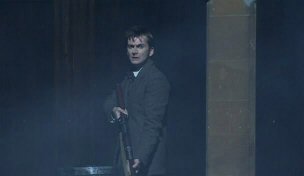 The Family and its army of extremely evil looking and frightening scarecrows, steal the show, however, with Henry Lloyd as Baines being incredibly creepy and downright disturbing in parts. Once taken over by the alien, the character just doesn’t blink, staring at his victims and just being completely unnerving.

Add to this a good performance from young up and coming British actor Thomas Sangster (Love Actually, Nanny McPhee) as the student who discovers John Smith’s real identity and Freema Agyeman continuing to impress as the beautiful and talented Martha Jones and you have one of the strongest supporting casts for a Doctor Who episode since it returned to our screens.

With an underlying story of the consequences of preparing young men to serve their country as the start of the First World War approaches and the cost of that fact for the Doctor, Martha and the rest of the school, this is science fiction at its very best. This can also be seen as reflecting on the current situation in the world, with differences between the modern thoughts on war than those in 1913, were everyone was expected to do their duty and not just those brave volunteers.

Filled with drama, action and some genuine scares, ‘Human Nature/The Family of Blood’ showcases how good Doctor Who can actually be and why Whovians love the show.