Fans of many a long running science fiction series will know that a show that takes places using either an established setting, like a starship, or one fixed location is known as a ‘bottle show’. Producers love these because they are a lot cheaper to make and for the most part tend to be a low point of a season. Fortunately, this isn’t the case for ‘Midnight’.

It takes place inside what is best described as eight-wheeled, armoured transport, with a level of luxury that isn’t really any better than we had in passenger jets back in the 1990s. With a lone stewardess going through the usual motions you would expect, this is going to be a long four hours for the passengers.

The advantage they have, however, is that the Doctor is onboard and he always sees the best in his favourite life forms in the universe, humans. He gets them talking to each other and we, as viewers, get to know the passengers a little more. The thing is that this isn’t an ordinary sightseeing trip. 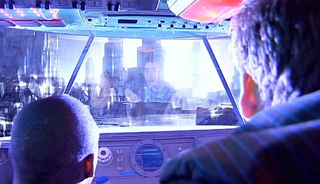 Written by show runner and producer Russell T. Davies, ‘Midnight’ is another frightening Doctor Who episode. Just as you get to know the passengers, start enjoying their quirks and finding out about their lives, the transport stops. From then on it is tension all the way as we discover that because the transport has taken a different route than normal, they have wandered into a new area of the planet that has never been touched by man.

Here they discover the planet they thought was uninhabited, as nothing can survive in Xtonic radiation, is in fact harbouring a new life form and it wants into the transport. Influenced by John Carpenter’s The Thing, the tension comes from the fact that the new life form inhabits a host, to learn everything it can about the intruders into its world. The trouble is that it might be able to change hosts at a whim, so no one is safe.

‘Midnight’ might be a bottle show, but it is one that will have you on the edge of your seat. Of course David Tennant excels and drives what could have been a very ordinary episode, but you know that ‘Midnight’ is just a building block for what is to come.

editor’s note: The last three episodes of this season all tie together, so Jamie Kelwick has suggested that he will write one large review.