When it was announced that there wouldn’t be a new season of Doctor Who and that David Tennant and the man who masterminded the return of the cult show to the small screen, Russell T. Davies, would be leaving the show, fans must have thought that 2009 was going to be an awful year.

Instead, this year will be seen as an extension of season four, with the Christmas Special ‘The Next Doctor’ to be followed by four special episodes spread out through the year leading to Tennant’s and Davies’ exit during the Christmas Holiday Season to be replaced by the show’s best writer Stephen Moffat as showrunner and virtual unknown youngster Matt Smith as the 10th Doctor for the new series in 2010. So fans will have to embrace the few crumbs of their favourite Time Lord and in ‘Planet of the Dead’ they have some tasty crumbs to start munching on.

After the end of ‘The Next Doctor’ and still suffering from the repercussions of what happened during the finale of ‘Journey’s End’, The Doctor continues to travel alone and tries to keep himself occupied by investigating anomalies and strange occurrences. His latest investigation leads him onto a London Bus, which just happens to be used as an escape route for antiquities thief Lady Christina de Souza. 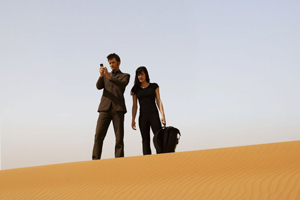 As the police follow in hot pursuit, the bus continues on its route and enters a tunnel. With both ends blocked D.I. McMillan finally thinks he has got his woman but the bus disappears. The bus and its passengers are transported to another world. This sets up the possible coming together to two strong characters. The Doctor, of course, is a natural leader, filled with answers and loves to take charge but Lady Christina de Souza is also used to taking the lead and been prepared for any situation.

The two clash but it also becomes very apparent that Christina could, in fact, be the perfect companion for The Doctor. Throw in a couple of new alien races, a threat to the Earth, the return of U.N.I.T. and the introduction of a new, quirky scientist called Professor Malcolm Taylor and you have the makings of a good Doctor Who episode.

Former ‘Bionic Woman’ and star of Merlin Michelle Ryan gets her chance to shine in another flagship BBC show. While she might have struggled to really make it after leaving hit UK Soap Eastenders and her first venture into US prime time TV getting cancelled, ‘Planet of the Dead’ gives her the chance to show what she can do and maybe even audition for the role of Lara Croft. She is undoubtedly gorgeous and wearing a tight black outfit throughout, she definitely shows she has star quality. As Lady Christina de Souza, she gets to show that she can act.

There is also a welcome appearance from actor/comedian Lee Evans, as the suitably quirky and very funny Professor Malcolm Taylor. Noma Dumezweni returns as U.N.I.T. officer Capt. Magambo and Adam James plays D.I. McMillan, the man who has been chasing Lady Christina for a very long time. 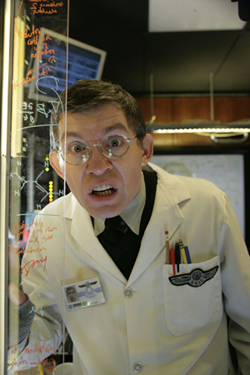 However, the episode is all about the performance of David Tennant as The Doctor again, and he shows why he will be probably be as fondly remembered for the role as the great Tom Baker is for fans of the original run. As fans continue to struggle to understand why he has decided to hang up his sonic screwdriver and think that he will never have a role that will mean so much to so many people, Tennant shows that he has made the role his own and that Matt Smith has very big shoes to fill.

‘Planet of the Dead’ might not be the big spectacle that fans might have been hoping for from the 2009 specials but it is still a good stand-alone Doctor Who episode. With some excellent visual effects, another new companion that has great chemistry with our favourite Time Lord and the hint of something much darker to come in the remaining shows, this would have been a good start to a season.

Unfortunately we’ll just have to wait until ‘The Waters of Mars’ airs later in the year (rumored to be November – editor).