On the one hand, I know why the Doctor Who team would want to make a Celebrity Historical adventure featuring Rosa Parks in 2018, especially after 2016 and 2017 happened. It’s a natural extension of their commitment to diverse faces and genders in all aspects of production, and a chance to share the inspirational story of a person who helped make the world where that commitment is even possible. On the other hand, it’s a Doctor Who Celebrity Historical. Those tend to be kind of jokey and full of the Doctor accidentally inspiring future accomplishments in the Historical Celebrity. Even when they’re quite moving, Amy Pond suggested the sunflowers.

And it’s 2018, y’know? And 2016 and 2017 happened. Dropping Rosa Parks into a thrilling mystery about Quantum Nonesticons from planet Derivia seems like it would be more disrespectful and irresponsible than suggesting Queen Victoria met a werewolf, or revealing Churchill’s lust for Daleks. Then you add in that you’re a British team trying to tell an American story while filming in South Africa, which is just another layer in this minefield cake, and it’s all “I know what you wanna do, but is this really the right show to do it with?” 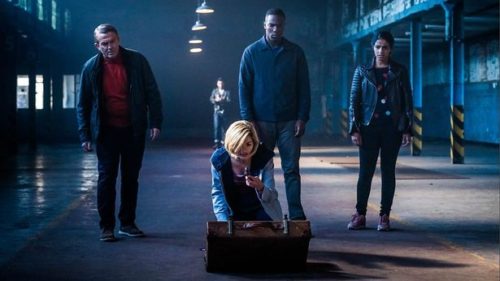 Consider also: I would think most people watch Doctor Who expecting the Doctor to be the hero. But this is a specific moment in Alabama, on a bus, where there was no hero but Rosa. She was alone on that bus in 1955 and alone in the consequences. The Doctor, the aristocratic alien with a British accent, has got to be a bystander if you tell that tale with any sense of honesty. To suggest, even for a moment, that Rosa Parks would only take her stand (metaphorically) thanks to a white woman? That’s beyond tone deaf.

So your hero can’t be the hero, and your story can’t stray too far into the tropes of your show, and you’re going to have bring up Emmett Till in the era of Trayvon Martin, et al., and you have a worldwide audience that includes marginalized people thirsting for representation and respect. Would you even try it, Derek? Would you swing for those fences?

This Doctor Who team went for it. And in my view, they managed to thread the needle. (While swinging for the fences.) (It’s an in-work metaphor.)

That’s not my call. I’m not one of the marginalized groups liberated by the historicity of Rosa Parks. I’m not going to be as sensitive to the nuance which might undermine the intent of the piece. It’s not for me to say if it’s insulting to make this a science-fiction story or not. I’ll learn from others. Now that it’s out, I can only authoritatively write about how it works as Doctor Who. 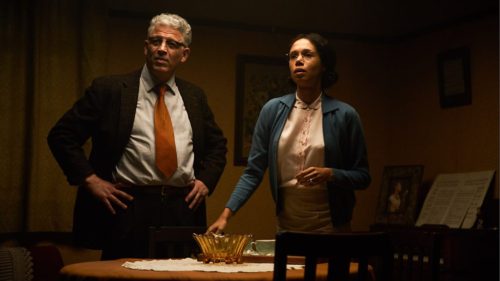 We’re definitely still in the “1963 – Verity Lambert, Producer” mode, which is terrific. Last week we had a science lesson, this week we get explicitly detailed historical facts. Brilliant. The Doctor (Jodie Whittaker, as the 13th incarnation of the Time Lord known as) is still wonderful, showing off a new range of faces for this face to pull. She’s really funny, which a previous incarnation noted was good. Yaz (Mandip Gill) gets to shine again, after spending last week in a witty-dialogue time-out. All the Doctor’s friends (including Bradley Walsh and Tosin Cole, natch) get their moments, actually, thank you. It’s almost like they had this episode in mind first, then reverse-engineered the companions for which characters and backgrounds would be best suited to dramatically dash around in it. The villain is handsome and charming, given your personal tolerance for “smug, disingenuous sociopath” these days.

However me, see, I can’t help thinking: If this were the planet Alabama, the Doctor would have dismantled the local power structure by noon, and had the Governor apologizing on television before tea time. There’s no way she would tolerate the way this society treats her friends if this was a traveling star colony. It’s frustrating to see the Doctor see her friends in such a bad place, only to say “As long as we put up with it, this will get better eventually.”

That’s the trouble with putting the Doctor in a story that happened in a world without the Doctor.

Is it still gorgeous television? Yes.

Is the music still wild and new? Mostly. There’s a bit of Dramatic Reverence that, y’know, is tough to avoid given the subject matter.

Do the Doctor Who elements make sense amidst the Historical Importance elements? They do, but they’re very basic. Five’ll get you five that Krasko (Joshua Bowman) is actually not XXXXXX but XXXXXX. Spoiler blocks for the person behind you, Derek.

Looking forward to next week.

P.S. Still not clear on your ratings policy. This gets 15 Artron Energies out of a possible Elvis Phone.