I recently rewatched Steven Moffat’s first New Who story, “The Empty Child”/”The Doctor Dances,” and it was much better than I’d remembered. My only major complaint, apart from the contrast between Captain Jack’s American accent and his UK English dialogue, is that the script comes down pretty hard on the boy’s mummy, treating her cover story as a tragic character flaw rather than an understandable means of dealing with a difficult situation. “The Doctor, the Widow, and the Wardrobe” takes a similar line against motherly white lies, but attempts to venerate mothers themselves, to the point of embarrassing overstatement.

Also featured in “The Empty Child” is this witty exchange:

ROSE: Look at you, beaming away like you’re Father Christmas!
DOCTOR: Who says I’m not? Red bicycle when you were twelve?

It seemed like good fun in 2005, but Moffat may have meant it. In 2011 we have a story in which the Doctor can be summoned by wishing for him, and he seems to have nothing better to do than invent and deliver extraordinary nigh-magical toys to a pair of children and their kind but hardly unusually helpful mother, Madge. If this is how he repays all small debts, it’s a wonder he ever finds time to save the universe at all. 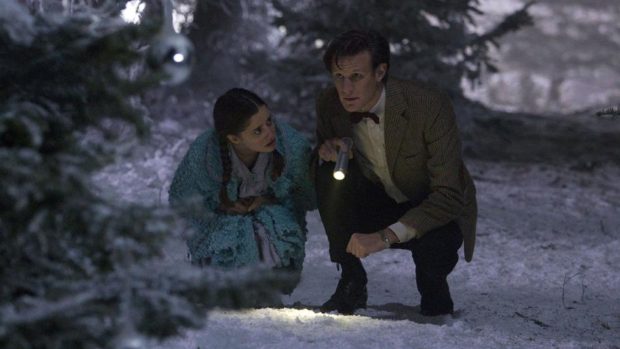 Fortunately, the story doesn’t overplay the Doctor as Santa slash God angle; he’s still enough of a fallible mortal to be genetically male and thus unsuitable to the purposes of a pair of moving wooden statues, and he still doesn’t do even the slightest bit of research when he sets up the biggest gift, a portal to a planet that’s about to be apocalyptically deforested. There’s charmingly spontaneous, and then there’s criminally negligent.

For a while it seems as though it might be worth investing emotion in the fate of the doomed trees on that planet (which is standing in for Narnia, in case you were hoping something would). You see, these trees have souls, and we’re supposed to feel better about the fact that they’re harvested as what one character calls the “greatest fuel source ever” (with an apology on his face for what must be the laziest expository line ever) because their souls are conveyed through an incredibly convoluted, precarious, and unlikely scheme into the stars, where they’ll just float around happily forever. It’s hard to imagine the Doctor grinning away a genocide of humanoids with the same palliative (they’re in heaven now! isn’t that nice?). What’s certain is that if you decide to care about the trees themselves, this episode isn’t going to leave you any happier than “The Beast Below” if you cared about the space whale or “A Christmas Carol” if you cared about the people being used as debt collateral.

So then if you choose to regard the trees as the Krafayis of this episode, a way to make things Christmasy and Who-y while sneakily telling a story about a family who’s lost a husband and father in WWII, and the mother who quite accidentally becomes a sort of Rudolph guiding him home, well, you might be a little more satisfied. Madge’s no-nonsense stoicism does lift when she’s (a bit cruelly) forced to review her memories of her husband in order to find her way home, up to and including his death, suggesting that her reluctance to tell her children about it before Christmas is as much about facing her own grief as saving her children from theirs.

The script and direction doesn’t give us much to feel of the hole this downed pilot leaves in his family’s lives, though, any more than it gives us of the mystical ensouled trees. We’re left to assume it’s moving by definition. In contrast, there’s the coda where the Doctor goes to visit Amy and Rory for Christmas, having been admonished to clear up the mystery surrounding his death. The Doctor apparently doesn’t know that River has already spilled the beans, but since we the audience have seen her do so, we’re stopping to puzzle out why there should be any doubt about this when we should be feeling the moment. Fortunately, Karen Gillan and Matt Smith play this scene so charmingly that the emotion wins, and the moment is moving anyway. If you’re the type of Who fan who regards the Christmas specials as the highlight of each season, you might disagree with me that one old friend squirting another with a water pistol can be more endearing than a woman getting her husband back from certain death, but in this case, for me, it was. Since it’s Christmas, let’s be charitable enough to assume that’s what Moffat intended. 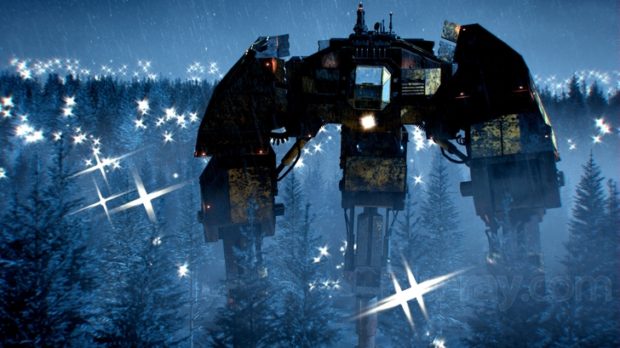 Let’s not forget the comic relief, the tree harvesters whose scanners are as powerless against natural fiber clothing as the sonic is against wood. They are funny, especially if you watch their facial expressions and if you’ve completely given up hope of taking anything in the episode seriously. Moffat’s mention of “Androzani Major” is supposed to be a little treat for nerds, a callback to “The Caves of Androzani”, which many old-school fans consider the very best episode of the classic series. (I’m still partial to “City of Death” myself, but I see where they’re coming from.) For those fans it’s not going to work as a treat, but an insult added to injury.

“Caves” demanded to be taken seriously, featuring a revenge plot, political assassinations motivated by avarice, the Fifth Doctor at his most heroic and self-sacrificing, large-scale natural disaster that actually affected people, and even a Shakespearean aside. The ostensible villain of the piece was inspired by literature (Gaston Leroux rather than CS Lewis), the second Robert Holmes character to be inspired by the Phantom of the Opera. The denizens of the Androzani system were after an incredibly valuable life-extending substance secreted by bats, and were prepared and fully competent to kill for control of it. Why the Doctor would imagine any planet in this system (which it presumably is; the head harvester calls them “Androzani trees”) would be safe for children at any point in its history is mystifying.

“Caves” was also one of the few Robert Holmes episodes not to feature bureaucrats as bumbling and concerned with appearances as these tree harvesters; a callback to “Carnival of Monsters” or “The Sunmakers” might have been a more appropriate choice. If you’ve never seen “The Caves of Androzani,” you can hopefully just enjoy “The Doctor, the Widow, and the Wardrobe” without knowing what you’re missing. If you have, it can only impair your enjoyment when you’re invited to make the comparison.