Given the harmonious relationship between classic Who and new Who — a distinction with less and less meaning every year — it seems unbelievable that Rona Munro is the only writer to have written for both phases of the show. Her last effort was in fact the last classic episode ever aired. “Survival” was a solidly enjoyable Seventh Doctor story featuring a mysterious link between worlds, a proud race of female warriors (who happened to be bipedal cheetahs), and a theme about overcoming one’s baser, warlike instincts so that enemies could come together to do better things. It also featured the Master, his nature being altered (in this case toward savagery rather than away from evil) by the planet of the Cheetah People. It’s remarkable and strangely comforting to see such strong links between 1989 and 2017, especially as we draw toward the end of another era. 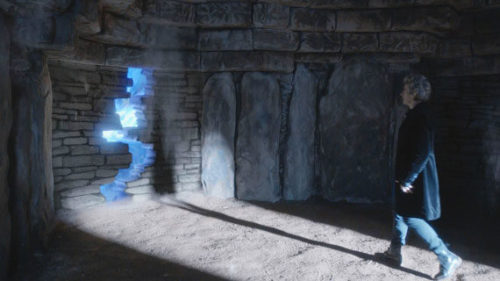 “The Eaters of Light” has plenty of rough spots. The titular creatures are refreshingly old-school in nature, hungry monsters to be fought rather than overliteral technology, Oedipal weirdoes, or the violence of capitalism, but like so many new Who antagonists, they raise so many questions there’s no time in 42 short minutes to answer. The locusts manifest as tentacled dragon/lions, running on four feet like any Earth animal, so how do they get to the sun, much less the rest of the stars? Perhaps the one we see is too wounded and weakened to fly like its siblings in the portal, and must absorb light to recover its full powers and give it strength to roam out of the immediate area, but why is it feeding only off the absorbed light of humans? Why not tuck into the trees and grass, which are surely as full of light as we are? Why not just wait till morning (of which there are at least two in the course of the story) and soak up some rays directly? And just how much longer are a handful of Romans and Celts going to be able to postpone the inevitable, if the tradition is all but forgotten in the modern age of children playing among the stones? I haven’t done the math, but this is surely a finite solution, as the Doctor points out. 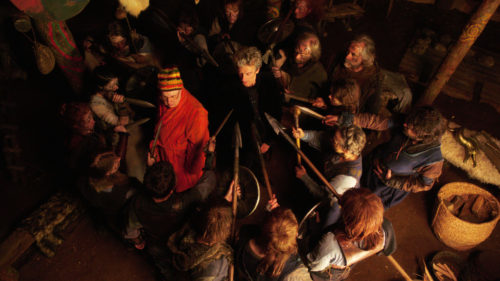 Then there’s the Doctor himself, in a curiously prickly mood. He’s not quite his Season 8 self, but he’s far ruder to Kar than seems appropriate, even before he learns what she’s done to put the universe in danger. Her home may be a “muddy little hill” but it’s difficult to see how she’s in the wrong for taking a risk to defend it from invaders, “indoor toilets” or no. And though Bill ought to know better than to challenge a Time Lord on his history based on a single book, it’s a little gauche for him to brag about having lived in it.

Still, it’s a lively little story with a good heart to it and plenty of fun moments. I enjoyed the Chekhov’s popcorn, even though it was easy to see it coming. I liked the bit about what the crows say, and why they say it. While I don’t think we needed yet another situation where Bill has to rebuff a crush by letting him know she’s gay (would it have killed them to give us one more episode where a cute alien girl falls for her instead?), I loved the ensuing conversation about how liking both boys and girls was an ordinary thing for the Romans. And most importantly, there was Munro’s take on the role the Doctor plays in the lives of those he encounters: translating their words to one another, so that they can hear the childish limitations they place on themselves and learn to rise above them. 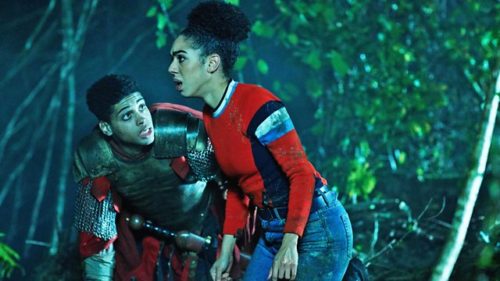 It’s remarkable that, even though both the Romans and the Celts are subject to Historical Figure Formality and tend to orate a bit more than they plainly speak, this episode seems more alive with actual characters than some of the flashier others this season. For better or worse, it also feels more resolved, not with the realignment of a status quo for an unseen next chapter, but with the creation of a legend. I’m glad new Who does a lot of things in new ways, but there’s nothing wrong with an old-fashioned ending once in a while. 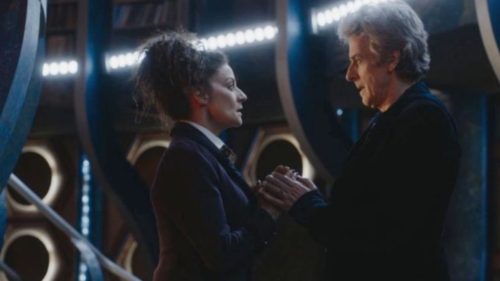 Of course, while the end of the story is old-fashioned, the actual end of the episode is not. I have my suspicions about where this Missy thing is headed, but when the setup of this series arc gives us intense scenes like that Doctor/Missy tête-à-tête, I’m content just to indulge it and see where it goes.