This is the first time since “The Five Doctors” back in 1983 that my first viewing of a Doctor Who episode took place in a movie theater, surrounded by other fans. I watched “Day of the Doctor” and “Deep Breath” that way, but both were second viewings for me. For “The Husbands of River Song” I deliberately left the episode unwatched on my DVR and waited three days so that I could watch it on the big screen with a college pal who’s a fellow fan, and my girlfriend, at most a casual Who viewer.

At first I thought we might have made a mistake. I chose a block of seats in a mostly unoccupied row, but quickly regretted it when it became clear we were next to three of the loudest fans in the theater. Once the slideshow of River Song trivia questions gave way to a short feature in which Nerdist impresario Chris Hardwick enlisted a carpenter to build a TARDIS facade into a doorway in his log cabin (“this is kind of a period room so a TARDIS would fit right in”…well, maybe if the chameleon circuit were working, but even if it were a room that looked like the 1960s rather than the 1860s, it wouldn’t have a police box stuck in the doorway), the three of them began to gush: “oh my god I love that man!” etc. They were silent during the segment where two girls who’d accompanied the carpenter to Hardwick’s house constructed some heartbreakingly half-assed homemade Doctor Who snowglobes, but perked up again when Hardwick reappeared and got so excited about his TARDIS that he started dropping F-bombs (bleeped) and S-bombs (unbleeped). We considered moving seats. My friend texted my phone: “K I L L M E.” I texted the two of them: “Next time you guys pick the seats.” My girlfriend texted back “I will pick the seats called at home.”

Fortunately, either our three rowmates calmed down during the next segment or I stopped noticing their reactions. Even more fortunately, the next segment was a primer on River Song, reviewing all the continuity leading up to this point. I’d been worried my girlfriend would be lost, since she’d only seen “Silence in the Library”/”Forest of the Dead” and hadn’t gotten as far as “The Time of Angels,” but it’s as if this primer were made for her, since surely most people in the theater were avid fans and fully caught up. She seemed to take most of the convoluted River timeline in stride, though she scoffed a bit (and rightly so) at the idea that merely being conceived in the TARDIS would generate a pseudo-Time Lady. 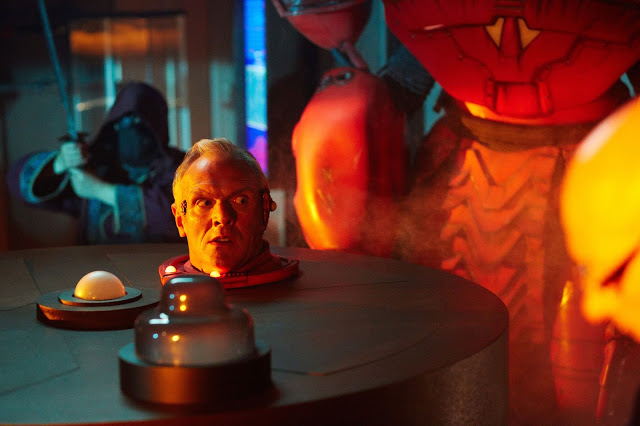 And then on to the main event. Though our rowmates and most of the rest of the theater were laughing right away, and though I’d been prepared for this to be what Doctor Who fans have learned to refer to as a “romp,” I thought the jokes (starting with the antlers) were hit and miss. After last year’s Alien-cribbing Christmas special, this one seemed more inspired by The Hitchhiker’s Guide to the Galaxy, especially the larger-than-life cliché-spouting head-removing dictator and the doomed galactic cruise ship with its disintegrating restaurant. It’s a mode that’s always worked well for Doctor Who, not least when Douglas Adams was actually writing and script-editing for the program, and makes a welcome coda for a season that ended with some pretty heavy stuff. Still, the humor seems self-conscious at times, and less confident than you’d expect from Moffat at this stage. The Doctor doesn’t really need to emphasize that “we’re being threatened by a head in a bag!”, and at one point he actually says something like “I know that wasn’t funny but I couldn’t help myself.” That weird line “He’s a lying down person. I don’t like lying down people. It’s so untidy” got a laugh, though, so what do I know?

Of course, the heart of the episode is the reversal of “Silence”/”Forest,” where the Doctor recognizes River, but she doesn’t recognize him. And that bit is so good, it really doesn’t matter whether any of the rest of the jokes land at all. It turns out that while she knows all about the Doctor’s previous incarnations, including the Tenth, not only does she not know about the Twelfth (because the Eleventh, her Doctor, didn’t), she doesn’t even know it’s possible for there to BE a Twelfth (because she knows about the War Doctor and the traditional regeneration limit). This is conveyed with virtuoso economy by the sort of plastic accordion foldout photo section nobody carries in their wallet anymore. Moffat delays the revelation for a deliciously long time, allowing us to meet River’s other husbands: King Hydroflax — the aforementioned dictator, marriage material chiefly because he has a diamond lodged in his skull and not a whole lot else — and Ramon, an affable fellow with romance-novel stubble and an unsteady hand with a teleport. We also learn that somewhere along the way River’s had at least two wives (one of whom might possibly have been the Doctor, or even the Damsel — long story) and even managed to win the hand of Stephen Fry (she’s that clever). In her defense, she cites the Doctor’s wives Elizabeth I, Marilyn Monroe, and Cleopatra (who may actually have been Stephen Fry — it’s confusing). 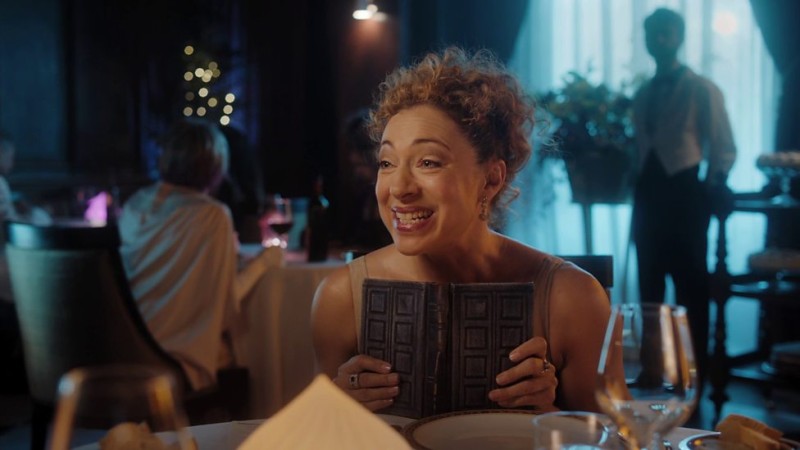 It’s an utter pleasure watching these two banter, both before and after River recognizes the new face of the man she loves. The Doctor has some fun once he’s accepted the situation, pretending shock at the TARDIS’s dimensions and turning in the scenery-chewing “bigger on the inside” reaction to end them all. But it’s River who gets in the best zingers, such as her contention that “it’s the easiest lie you can tell a man,” that you’re in love with him. “They’ll automatically believe any story they’re the hero of.”

River so convincingly sells herself as a wonderfully, charmingly unscrupulous, man-eating, profiteering, booze-sneaking, sonic-trowel-brandishing holy terror (and note that she herself has successfully booked passage on a ship whose tickets are only available to those who have committed “the provable murder of multiple innocent life forms”) that there’s just the hint of doubt whether she has ever actually cared for the Doctor or just found him “terribly useful now and again.”

But then when she thinks he’s in danger, even though she believes he’s nowhere nearby, what has to be the truth comes out: as far as she believes, he’s never loved her, but she’s always loved him. She goes on and on, possibly stalling for time but almost certainly speaking her mind, talking about how loving him is like loving the stars or a sunset, not a person who could love you back and put themselves in danger to save your life. And this was one of two moments in the episode (the other toward the end, in the tragic and romantic denouement) when I knew it was the absolute best thing to have my girlfriend sitting next to me, because both times this casual Who fan with little more than a passing acquaintance with River Song, and almost none at all with either Matt Smith or Peter Capaldi, was moved enough to reach for my hand. And just as the Doctor finally let the penny drop with a quiet “Hello sweetie,” I reached for her hand back.

In the end, the episode and the way we watched it all came down to that moment. The Doctor got to reveal to the woman he loved more than she realized that he’d always been there by her side, to protect her, to admire her, to share in her adventures. And so did I. 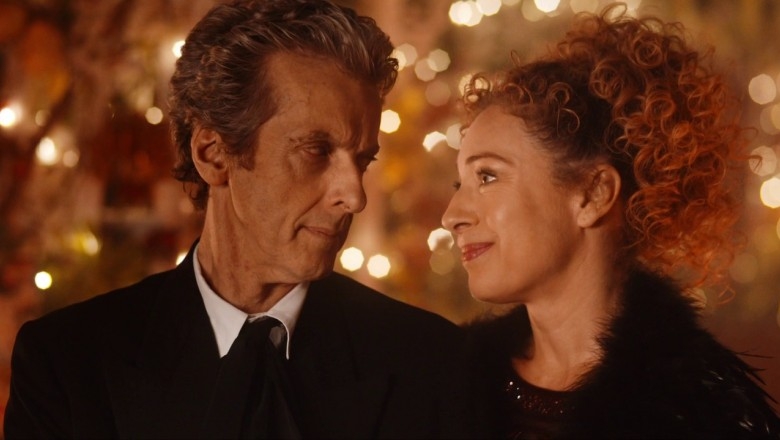