As we hit the half-way point of the new season, Doctor Who is still hitting the ground running and this is the first episode to start introducing plot points that will build to the dramatic finale. Professor Lazarus’s experiment will change the evolution of human kind forever and the Doctor is intrigued because he knows absolutely nothing about it.

The Professor enters his hypersonic sound wave machine an old man but when he exits, after being saved by the Doctor, he is transformed into a younger version of himself, in essence regenerating. Knowing that should be impossible for human science, the Doctor realises that everything might not be as it seems and the Professor might have awaked dormant genes that could have catastrophic results for him and the rest of the guests at the experiment demonstration.

Now six episodes in, it is clear that Russell T. Davies and his creative team have been given a much larger budget for this season. The creature that Professor Lazarus becomes is completely computer generated and looks extremely good for British television.

While it might not be up to the standards of the much larger funded American counterparts, it is the creativity and design of the creature that has to be applauded. It is in the storytelling where this show excels however, successfully mixing all out action with an underlying story that sets up things to come. 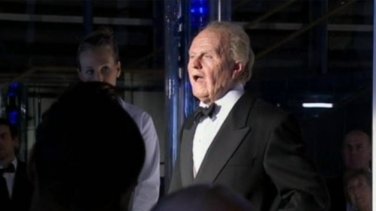 The episode also lets us get to know more about Martha’s family. Her overbearing mother, played by the excellent Adjoa Andoh, wants to know what she has been doing and who the Doctor actually is. Her sister Tish, played by Gugu Mbatha-Raw, gets drawn into the action after being jealous of all the attention that Martha gets. Her brother Leo, played by Reggie Yates, doesn’t really get enough screen time to develop however. They are very different from Rose’s friends and family, overprotective and competitive, making you understand why Martha is drawn to the Doctor.

The League of Gentlemen’s Mark Gatiss has real fun as Professor Lazarus, showing that he can handle dramatic as well as comedic roles with ease. There is also a cameo by Coronation Street legend Thelma Barlow as Lady Thaw, the woman who thinks she has a future with the now young professor.

‘The Lazarus Experiment’ is an action packed episode that is made all the more intriguing by the introduction of the mysterious ‘Mr. Saxon’ character, someone who will play a major role in the rest of the season. Doctor Who fans have never had it so good.