After two successful seasons and a Christmas special in 2005, the Doctor returns for another festive adventure. The good news is that he is on top form.

Last Christmas Russell T. Davies and his creative team used ‘The Christmas Invasion’ as a way of introducing the new actor playing the Doctor, David Tennant. This year it gives the chance for the team to deal with the repercussions of the second season finale and the Doctor coming to terms with losing Rose. He isn’t given that much time to lament, however, as a woman has teleported into the TARDIS wearing a wedding dress and screaming blue murder. It is up to the Doctor to discover why Donna was transported from the church to the TARDIS and why there are robots dressed as Santa chasing her all over London.

It could have been so easy for the writers to concentrate on providing a stand-alone episode that didn’t deal with the events of events of season two and for the most part ‘The Runaway Bride’ doesn’t. But it is the underlying driving force of the Doctor’s emotions and state of mind.

Missing Rose desperately, he is thrown into an adventure far quicker than he may have wished. Donna becomes a quick substitute for Rose, as the Doctor sees the mystery of her appearance and what the robots want with her as a distraction from what he is feeling. Obviously, though, all is not well and even Donna notices this.

This aspect gives the character of the Doctor a real chance to grow. We see he him showing real emotion and a side of him and his heritage that many new fans might not have realised could ever have been present in a Time Lord. 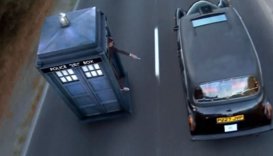 David Tennant really makes this character his own. Successfully mixing charisma and quirkiness, Tennant is instantly likeable as the Time Lord and extremely easy to connect with. He is also slight aloof, never revealing everything about the history of his race or what he has done or influenced in the past. It is very easy to see why he is becoming a firm favourite in the role.

However, it is through his companion that you see his adventures and it has been Billie Piper’s job for the last two seasons. As she has now left the show, we had to have another human character to follow. For this episode we have the bride, Donna, played by the current queen of British comedy Catherine Tate. Slightly too loud and completely over bearing, Tate struggles at first to make the character likable but as the action relents at points and we get to see her in more normal situations, you actually start to feel sorry for her and her predicament. Not totally relying on a comedic talents to pull the character along, Catherine Tate gets to try some dramatic acting and she raises to it quite well, it was just a shame that she was so annoying during the opening scenes.

As a continuation of the Doctor Who saga, ‘The Runaway Bride’ is very good, letting you discover more about the Doctor’s past and his state of mind after losing Rose. Filled with action, including a road chase that will have Whovians salivating, this is a fun episode for the holiday season and one that everyone can enjoy.