When Don Coscarelli and Bruce Campbell teamed to adapt Joe R. Lansdale’s novella Bubba Ho-Tep, they were adapting genius. Pitting an elderly Elvis Presley against a soul-sucking mummy in a Texas retirement home, it’s the wild stuff that makes cult classics. For years, Coscarelli promised a prequel, but it just never happened. Or at least, not yet.

So let’s go to the source, Lansdale’s imagination, and create a prequel in the medium that can afford to tell it — comics. IDW Publishing has just announced they’re teaming with Lansdale to adapt the secret story of what really happened when the King went to work for Tricky Dick Nixon. And I can’t wait.

Hail to the King, baby! Prior to the events of the original Bubba Ho-Tep cult story, Elvis was enlisted by President Nixon to defeat an alien threat unlike anything he’s faced before. IDW and award-winning writer Joe R. Lansdale present Bubba Ho-Tep and the Cosmic Blood-Suckers!

“Bubba Ho-Tep was an accidental story that turned out to be my first film adaptation, and it’s still going strong in story and film,” said Lansdale. “And finally, it has inspired a background story that was first a novel, and is now represented in the medium that first made me want to be a writer: comics. Graphic novels. What we used to call Funny Books. I’m excited and looking forward to readers discovering it all in color and looking fine. May more Bubba comics burst into existence and give the world the true story of how the world has been protected from evil, and for quite some time. Thank goodness these defenders are out there, working in the shadows.” 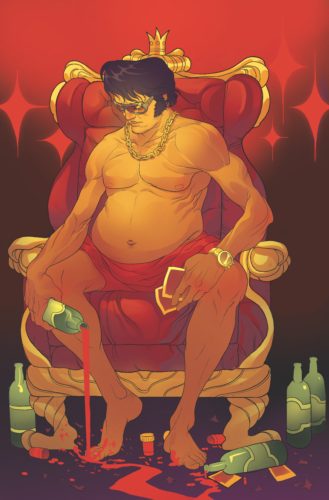 In adapting this acclaimed work for comics, Lansdale will be joined by writer Joshua Jabcuga and artist Tadd Galusha (Godzilla: Rage Across Time), to help bring the story to terrifying life. Part of a secret government organization designed to protect civilians, Elvis Presley and a group of hardcore warriors set out to save the world from an invasion of hive-minded, shape-shifting, vampire-like creatures from a dark dimension.

Issue one arrives this March with covers by Galusha, Baldemar Rivas, and Timothy Truman.