All day long, Marvel had been sending out emails with the header “Change the World?” As it turns out, they meant Weirdworld, an other-dimensional planet where sword and sorcery works better than straightforward superheroing. And they’re going to send the Champions right into that. It may be a really good jumping on point, as writer Jim Zub, no stranger to fantasy, guides their path.

If there’s one team book really best suited for middle-school readers, it’s Champions. Made up of Marvel’s under-18 heroes, they’ve been more in tune with what kids might be concerned about, and from the beginning have felt pretty realistic — superpowers notwithstanding.

This October, Jim Zub, Sean Izaakse, and Max Dunbar are taking the Champions on the ultimate quest—one that involves an adventure beyond what could ever be imagined! But as they travel through this twisted fantasy realm, one thing becomes clear: they may never be the same…

“With two of their teammates having vanished into Weirdworld, the rest of the Champions have no choice but to follow them into that ever-changing landscape,” tease SVP and Executive Editor Tom Brevoort. “However, the changes this will put them through are both profound and unexpected—and will lead to something new on the horizon!”

“Everyone who knows me and my work knows that sword & sorcery is near and dear to my heart. It’s a potent vehicle for building stories of survival and heroism in worlds where life can end on the tip of a blade and creatures lurk in every shadow,” adds Zub. “The Champions fight for what’s right, no matter where they are…or who they are, and this upcoming weird and wonderful three-part story is going to show you how true that is.”

Join the quest and prepare for sacrifice, swords and sorcery as our heroes encounter the monsters and nightmares only found in Weirdworld! It all begins in CHAMPIONS #25, in comic shops this fall! 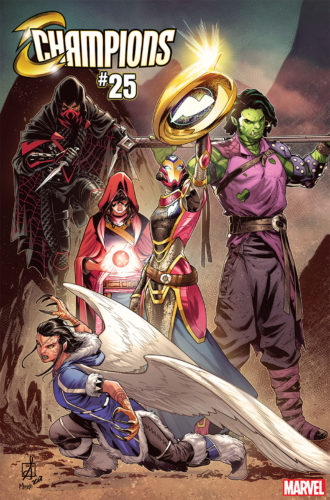