In the beginning, there was ink and paper. And it was good.

Yea, then after a dinosaur walked the theaters, someone discovered paint and cellulose. And it was good.

Yea, and lo, a mouse didst walk the screen, with rabbits, and ducks, and cats, and many sundry creatures, and the people didst laugh. And it was good.

Yea, and it did come to pass that men didst experiment with the paint and the cellulose, and didst use computing machines to aid them in their task. And a great mouse detective strode the landscape, and there was Beauty. And a Beast. And then didst the children’s playthings have their own story, and yet again didst they. The insects didst live, and dinosaurs rose again, though they didst but bore the people. And then there wast Shrek. And it was good.

And on the sixth day, in what some said was to be the final fantasy, someone tried to use the computing machines to animate man. And the people didst say “ooh” and “aahhh,” but it was not quite there yet. And still the interested didst flock.

From its subtitle, you can guess that Final Fantasy: The Spirits Within has a quasi-religious bent. Alien creatures dubbed “phantoms” (and they are creepy mothers) have invaded the Earth and wiped out a good deal of its population. Only by using bio-etheric energy (I love science fiction) can humans hope to shield themselves and create weapons that will stop the phantoms. The man who harnessed said energy, Dr. Sid (voiced by Donald Sutherland), has discovered that the final solution lies in harnessing the power of “the eight spirits.”

Many people consider Sid to be a nutcase, especially General Hain (James Woods). Sid has also posited that we are all spirits split off from Gaeia, and when we die, we return to her to share our experiences. If he can collect all of his “eight,” he can create a bio-etheric wave that will wipe out the phantoms and save humanity. Why eight? Why the particular ones mentioned? Aren’t there eight tiny reindeer pulling Santa’s sleigh? Look over there! It’s a shiny object!

Dr. Aki Ross (Ming Na), Sid’s assistant, takes it upon herself to search for the eight. Actually, she has already discovered five when we encounter her. Venturing into the ruins of old New York City (because New York City always gets it in post-apocalyptic fantasy), Aki finds the sixth spirit in the form of a lone plant. As the phantoms surround her, she finds help in the form of Nephites, soldiers specially trained to withstand phantom attacks. This squadron is led by Gray (Alec Baldwin), possibly an ex-boyfriend of Aki’s, who still harbors deep feelings for her.

Unfortunately for their love, Aki has an even more personal reason to find the spirits. It seems she has been infected by a phantom, and needs to complete the bio-etheric wave before the phantom takes over. Maybe. It’s never really quite explained, because for almost every other character, a simple swipe by a phantom pretty much kills them. The phantom communicates to Aki in dreams which detail the destruction of its home planet. 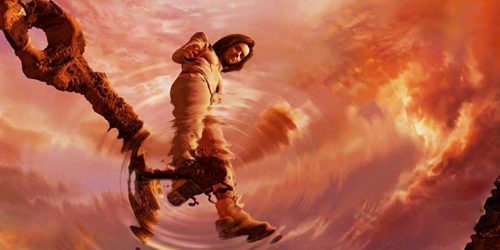 As Aki grows more desperate in her quest, the evil General Hain uses those very dreams to prove that she is in collusion with the phantoms. Hoping to discredit Sid, Hain wants the surviving Earth Council to let him use his weapon of choice – a really big cannon that sits menacingly in space. No mention of Hain having a really tiny cannon of his own. Sid believes that if the cannon gets used on the phantoms, it will drive them deep into the planet, causing it to explode. This would be bad, but evil military types in stylish black leather just never listen.

Story-wise, Final Fantasy has its compelling moments. You have to blink a lot, and accept that some elements just will not be explained. A day later, you realize that’s because they don’t make any sense. But in the middle of it all, the ride can be fun, because the phantoms really are frightening looking, and if some of it comes off feeling like Aliens, there are worse science fiction films to have, ahem, homaged. Most impressively, for a movie that literally does look like its videogame origins, it feels far less like a game than many of this summer’s other movie offerings, even in its fight sequences. Co-writer/Director/Creator Hironobu Sakaguchi clearly cares about his narrative. It’s refreshing, and bodes well for other game creators interested in dabbling in film. 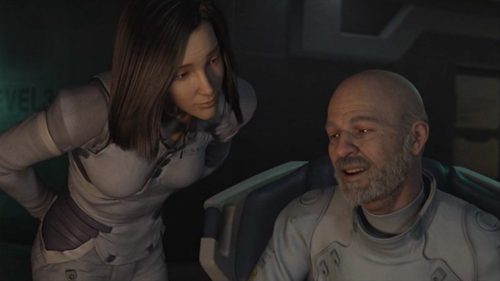 What really gets jarring is the animation. Yes, in some places everything looks plausible. That only serves to distance the audience when a sequence looks like animation instead of live-action. I found myself judging how each character looked, instead of giving in to the whole thing. Part of it is that some characters still bear the signs of traditional anime design, even Aki. Only Dr. Sid consistently looks like he could be a real person, though in close-up, that would be a real person under a lot of latex make-up. Don’t protest that it’s clearly animation; a lot of the pre-release publicity for this film consisted of bragging about how real these characters look. The claim has to be held up to scrutiny.

So actors should not be worried about being replaced by digital counterparts. Yet. On the other hand, being digital should appeal to many. In live film, Baldwin has grown too old to play the young romantic lead, as Pearl Harbor would attest. Here, he gets to play the role that Ben Affleck would have, and he gets to even look like Affleck. Steve Buscemi can bring his loony energy to a role and still look handsome. With digital actors, you can be anything you want to be.

In the context of Final Fantasy, it proves a little disturbing. We’ve grown used to traditional animation molding characters after the actors playing them. Sakaguchi’s team has instead made the characters look like whatever other actor they wanted: Hain resembles Christian Slater far more than James Woods. And Frasier’s Peri Gilpin looks suspiciously like J. Lo, right down to the booty.

But why not break tradition? Instead, Final Fantasy (which never seems final, does it?) may be the harbinger of things to come.