The seas are rising. Society has turned to religious conservatism, while turning its back on math and science. Gaal Dornick (Lou Llobell) escapes only because of an invitation to study with Hari Seldon (Jared Harris), a famous mathematician on Trantor, a sparkling world at the center of the empire.

Yes, it’s not 21st Century Earth; it’s an outer world in a far-flung fictional future where an iron-handed Empire keeps a tenuous grasp on the galaxy. This is Foundation. Show creators Josh Friedman and David S. Goyer have based it on Isaac Asimov’s revered science fiction trilogy, expanding its emotional resonance while trying to keep hold of the ideas Asimov put forth. To wit, STEM will save civilization. But Friedman and Goyer also wrestle with a question I don’t remember pondering when reading the books: is civilization worth saving?

Hari Seldon thinks so. His mathematical model of psychohistory predicts a slide into darkness that will last 30,000 years, though he also believes it can be mitigated to a thousand. The Emperor Cleon also believes in civilization, as long as he retains his primacy. And there’s an interesting addition by Friedman and Goyer. Hundreds of years before, Cleon cloned himself, so he is a living holy trinity of a young Brother Dawn, a middle-aged Brother Day, and wizened Brother Dusk. It’s imperialism as mad tea party; as Death wants a clean cup, Dawn and Day move to the next stage while a new clone decants. 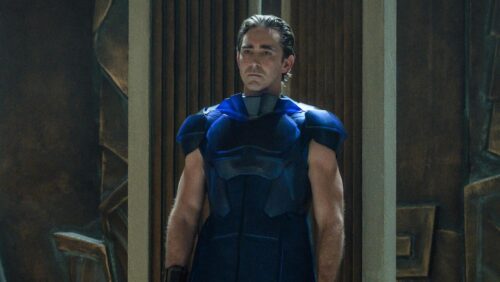 This choice gives the audience an honorable antagonist to latch onto, and a meaty role (or roles) for Lee Pace and Terrence Mann to chew. Asimov’s novels spanned thousands of years; at least this way we’ll always have Cleon. We’re also a more sophisticated television audience, raised and disappointed by Game of Thrones, so we can handle the sweep that will no doubt happen from season to season. From the first episode, Friedman and Goyer jump back and forth in a time span of about 35 years, beginning with a scene on yet another planet — Terminus — that isn’t clarified in the two episodes that premiered on the 23rd. (Apple TV+ has given Fanboy Planet access to the full season — but I have not yet watched it all.)

The concept of psychohistory remains front and center, the idea that the future can be predicted mathematically on a large scale. Individuals, of course, cannot be predicted, only guided — some might say tricked — into bringing the predictions to fruition. Hari might understand civilization, but he can only understand some people. Cleon must learn to truly understand themselves. And Gaal? She has so much to learn. 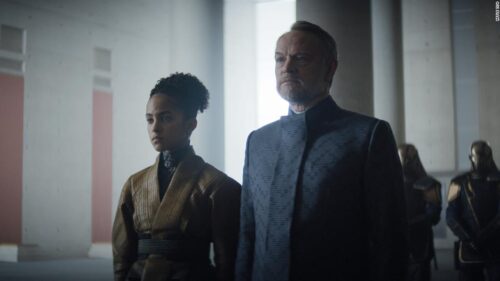 Though different from the books (of course), Foundation is well-written and fairly compelling, full of solid actors in small roles. Friedman and Goyer have made the cast more diverse, but that makes sense as Asimov started the series in 1942. The only odd casting choice (to me) is Harris as Hari Seldon, a character I as a reader assumed was South Asian, not Irish. But Harris does well what Harris does, continuing to carve a niche as conflicted charismatic figures. At this rate, he should be ready to step into his father’s robes in the inevitable Harry Potter reboot.

And by the way, if civilization is worth saving, it will be because of STEAM, not STEM. Math and science are great; art makes them greater. Seeing Friedman and Goyer make their artistic choices in this retelling of Foundation provides the proof. Many will disagree, as they love the books, but any comics fans should be fine with this remix; we’ve been through at least six DC Universes and a couple of Marvels. We’ve already got the foundation for this.

Fanboy Planet provides Amazon links on this page. Purchases made through links here may generate revenue for us.