Does this mean we all can become characters in Star Wars?

Possibly, if you’re planning a trip to Black Spire Outpost on the Outer Rim world of Batuu. It may be easier than you think, depending on your willingness to stand in line while trying to stay inconspicuous from the First Order. Batuu will be intersecting with Earth in both Anaheim and Orlando, under the English term “Galaxy’s Edge” in the Disney parks.

But that’s not until sometime in the Summer of 2019. We are entering a new world of storytelling — sure, there’s “The Wizarding World of Harry Potter” at various Universal Studios, but there you’re still basically walking through a long-established story. “Galaxy’s Edge” is something different — a place you’ve never been before, though now you can read about it. Because Disney has this entire multimedia empire to leverage, and to start explaining the backstory of this place.

Last week, Marvel announced Star Wars: Galaxy’s Edge, a 5-issue miniseries by Ethan Sacks and Will Sliney, to fill in some blanks and likely provide some context for the attractions in the 14-acre land. In their press release, they describe the place thusly:

“Black Spire Outpost has long been frequented by smugglers, merchants and travelers from every corner of the galaxy looking to make their score on the infamous black market – or experience the exotic thrills only the remote world of Batuu has to offer. It’s a place where beings thrive on unique opportunities of the lawless outpost at the edge of space – but the First Order threatens their livelihood…”

As we know the Millennium Falcon will be one of the attractions — with a bit more interactivity than we may be used to in theme park rides — it’s interesting that their press release ties Black Spire Outpost closer to characters from the original trilogy. Series writer Sacks says, “…fans will be excited to see this story span through the eras and bring together some all-time favorite characters, including Han Solo and Chewbacca!” 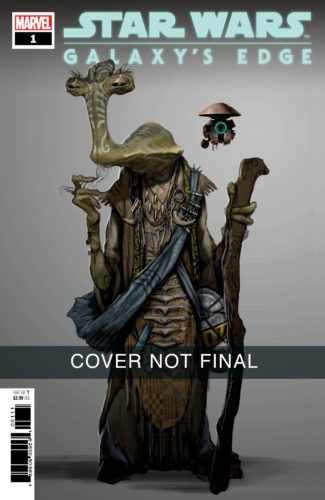 This could just mean backstory, not theme park continuity (as opposed to the Marvel Theme Park Universe which so far seems to be an endless loop of about 30 minutes). But Marvel isn’t the only place you can find out more. StarWars.com yesterday announced a series of books that will flesh out the legends of Black Spire Outpost even further — though they may not be out in time for the first wave of crowds in Anaheim.

On September 3, Del Rey Books will release Delilah Dawson’s Black Spire, clearly designated as a prequel to the Disney Parks experience (because… it will be an experience unlike any other in the Disney Parks). According to the site, “General Leia Organa dispatches her top spy to Batuu in a desperate search for Resistance allies.” One can assume that eventually we might be those Resistance allies.

Filling in more backstory, Disney Lucasfilm Press will have two books coming out in August — a YA novel, A Crash of Fate by Zoraida Cordova, and a middle-school book that touches on Batuu but also provides some meta-commentary, Star Wars: Myths & Fables written by George Mann with illustrations by Grant Griffin. Mann has been doing some interesting things with storytelling — he’s also written a Doctor Who mobile game in addition to comics and novels — and of all these projects, this one interests me the most. What kind of legends do Tusken Raiders tell their children? We might find out. 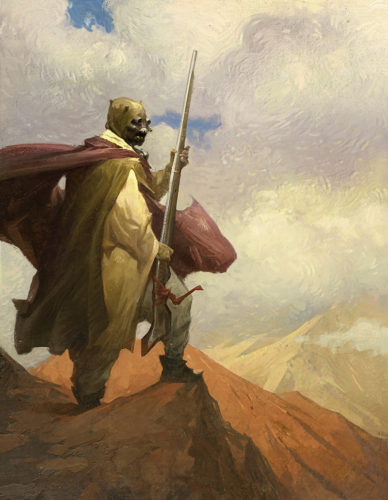 There’s a promise of more, including kids’ comics from IDW and a Galaxy’s Edge cookbook. At last, we’ll get the secret of blue milk. But are there some things we were just not meant to know?

Of course, this isn’t the first time Disney has built backstory into their attractions — Guardians of the Galaxy: Mission: Breakout and the Iron Man Experience had comic book tie-ins, there’s a series of books under the Haunted Mansion banner, and there’s a very weird but excellent Space Mountain graphic novel in addition to the Marvel “Disney Kingdoms” imprint around various attractions. (Seekers of the Weird stands out as one based on an attraction that never actually happened.)

We’re in a very interesting time for storytelling, and the best of Disney’s attractions utilize that to create a memorable experience. I can’t wait to step into the edge of a galaxy far, far away.