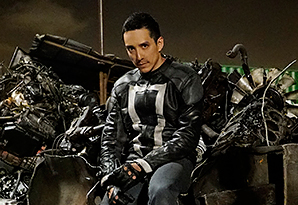 Despite some excitement about Hulu exploring darker corners of the Marvel Universe, the first proposed new series has been dropped. Variety reports that Ghost Rider will not ride.

Set to star Gabriel Luna, who had earlier played the character on Marvel’s Agents of SHIELD, the show has been dropped due to an alleged “creative impasse.” As of right now, the planned Helstrom, featuring characters somewhat resembling Son of Satan/Hellstorm and Satana but likely much less directly satanic, is still planned. Also still in the mix are the animated comedic quartet of Howard the Duck, M.O.D.O.K., Hit Monkey, and Tigra and Dazzler.

At least, that’s what we know for now. Let’s put some speculation hats on.

Though Gabriel Luna was good in the role, the Ghost Rider series wouldn’t be set in the same reality as Agents of SHIELD, so he’d be playing a different Robbie Reyes than before. Currently, Marvel Comics (remember them?) is pushing the previous two Ghost Riders, Johnny Blaze and Danny Ketch, in their marketing, so Robbie’s presence on screen would be potentially confusing, if there were any connection between who watches Hulu and who reads comics.

It’s not about the horror angle, though you might think so after the DC Universe Swamp Thing debacle. Hulu has a good deal with Blumhouse, and a robust horror offering. Helstrom seems strong, but what it has that Ghost Rider doesn’t is… likely younger, hotter leads (as yet uncast). The Marvel shows that are playing strongest on Hulu in the US are Runaways and Freeform’s Cloak and Dagger, both much more teen or “becomer” oriented than Ghost Rider would be.

The animated shows also seem safe because thanks to the FX brand launching shows that compete with the Adult Swim market, that, too, is a niche that Hulu seems content to have. This isn’t a Disney edict; everything we’ve seen so far points to Disney being interested in letting Hulu lean in to edgier content.

At the same time, Disney+ will be leveraging Marvel Studios (separate from Marvel Television on Hulu) to create series that will be cinematic, and directly tie into the films. Ghost Rider would suffer as a lot of superpowered characters suffer on television — very limited budget to show the actual Ghost Rider. If Marvel Studios wanted to pick him up for a Doctor Strange tie-in, it might work more effectively.

Or all of it could come right down to what I’ve long believed in my heart — I love what Ghost Rider looks like. He’s great as an action figure, as a tattoo, or as a motorcycle decal. But the stories — the good ones with him — are rare. Maybe they just couldn’t crack it.