A long time ago in a galaxy far, far away… we didn’t necessarily need any movies set even further back than that. But as much as filling in backstory can be a deadly storytelling trap, Solo: A Star Wars Story does the right thing and explores territory in the Star Wars mythos that moviegoers haven’t seen before. Though one day Han Solo (Alden Ehrenreich) will become a part of the Skywalker Saga, there’s nothing in Ron Howard’s film that deals with it. Relatively freed from the mythos, Solo can do something that few Star Wars movies get to do — just be fun.

Though for those who have read the tie-in novels and comics, played the games, and watched the TV shows, Howard and the Kasdans (screenwriters Lawrence and Jon) have scattered plenty of easter eggs. It’s clear that they’re fans, but they’re also pros; Solo propels forward in a decent story all its own. The eggs are just there for those who care about looking.

Solo also restores the aesthetic of the original Star Wars. Planets are dirty; technology tends to be well-used. And as the original trailer promised, it delivers aliens from (close to) a thousand worlds. “Scrumrat” Han has grown up on Corellia under the thumb of the Fagin-like Lady Proxima (Linda Hunt). Not so much eager to leave a life of crime as just leave Corellia, Han tries to double-cross Proxima and run away with his first love, Qi’ra (Emilia Clarke). As we know often happens to the older Han Solo, things don’t quite go as planned. 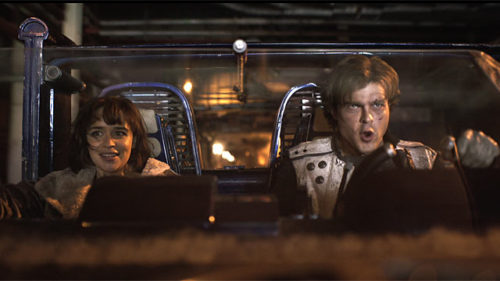 Years later, he falls in with a crew led by Beckett (Woody Harrelson), who warns him that once he’s in this life, he’s in it for good. Not one to do much looking before he leaps, the cocksure Han jumps at the chance. That jump leads him to the crimelord Dryden Vos (Paul Bettany) and a direct line to his past.

There’s plenty of visual imagination, yet a welcome return (in places) to practical effects. Like with The Last Jedi, there seem to be a few droids that are actually there and not digital creations. Though the best of them, L3-37 (Phoebe Waller-Bridge), seems to be a combination. But she’s also something different — for being clearly a female droid. Her snippiness has an extra layer as she sees other droids limited by restraining bolts. Before the Rebellion, L3-37 has an understandable revolution in mind, possibly paving the way for a new and interesting direction for the franchise.

Solo also sets up storytelling more in the vein of the Marvel Cinematic Universe. Ehrenreich may be contracted to three films, but the rest don’t have to be direct sequels to this. Once Donald Glover’s take on Lando Calrissian enters the picture, it’s clear there’s potential in the already-announced Lando film. While there may be a running thread of the criminal underworld (and long overdue it is), we can see many different characters headline adventures of their own.

Because admittedly, whether written, directed, or acted that way, Ehrenreich makes a fairly one-dimensional Han Solo. He’s got the cockiness down — which Dryden Vos laughingly praises — but the underlying self-doubt that Harrison Ford bought the role just isn’t there. When the older Han Solo told Leia, “I know,” he’d earned it. This young guy just doesn’t ever. He makes mistakes like crazy, and others just shake their heads to clear their frustration.

Others in the film fare better. Thandie Newton has a thankless role early on, but makes the most of it. Harrelson just makes everything better. Both Waller-Bridge and Glover practically steal the movie for themselves. And Bettany hasn’t seemed to be having this much fun since A Knight’s Tale; though he returned to stardom as The Vision, that role never gets to cut loose.

Clarke, too, gets to have more fun than she usually does. Playing the femme fatale in what is intended as Star Wars noir, she makes a case for further possibilities in the Star Wars universe. This, too, could have been a one-dimensional role, but she gives it more. Only one question remains: how do kids who grow up together develop separate accents? 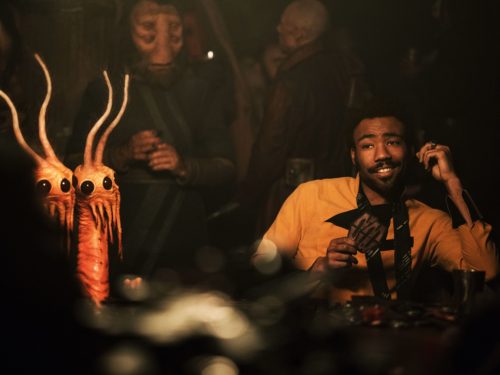 Never mind such nit-picks. Solo: A Star Wars Story doesn’t quite revive that feeling of being a kid watching Star Wars for the first time, but it comes close. And it’s sending me digging through my garage for the original Brian Daley Han Solo Trilogy, because sometimes, an adventure can just be an adventure for its own sake.