Some people might say that Harvey Pekar has lived a life right out of a comic book. And they’d be right, except that the comic book is one he wrote himself.

Since the early seventies, Harvey has published stories taken from his own life. Though he himself has no drawing ability, this slightly grouchy file clerk enlists giants in cartooning, including Robert Crumb, to illustrate, and gained a sizable following that can’t get enough of his extraordinary tales of ordinary life.

Even though his work had won an American Book Award, sparked stage adaptations, and earned him appearances on Letterman, Harvey preferred to keep his day job. For thirty-five years, he worked at a Cleveland VA Hospital, finally retiring in 2001. Appropriately enough, it’s a scene captured in the film adaptation of his life. 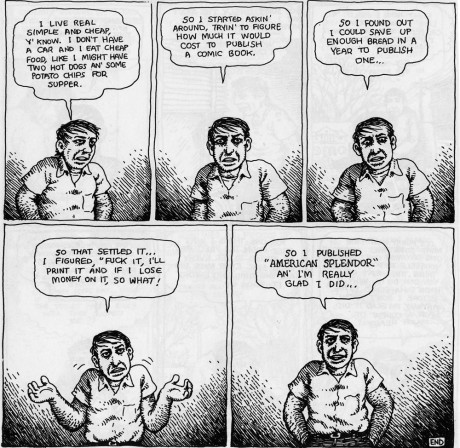 When called a pioneer, Harvey seems uncomfortable. “I didn’t invent autobiography,” he demurs, “What I think I did do, which was pretty unusual, was to place as much emphasis as I did on the mundane follies of everyday life. To look for, maybe, heroism there. To look for humor in everyday life as well. That’s where I think I made an impact.”

As a boy, he had a brief obsession with collecting comics. “I got sick of it,” he rasps (a recurring problem that legend says was caused by constant yelling at people). “I mean, I could see the formulaic side of it back when I was ten, eleven years old.”

Still, Harvey loved collecting, and his interests turned to jazz. Through that obsession, he began writing as a critic in 1959, and among his fellow fans was a young Robert Crumb.

As a result of his friend’s work in underground comics, Harvey says, he started to see the possibilities.

“Comics could do anything that film could do,” he offers. “And I wanted in on it.”

But it took Harvey some time to decide just what he wanted to do.

“I theorized for maybe ten years about doing comics,” he says.

Finally, he laid out some stories with crude stick figures and showed them to Crumb and another artist, Robert Armstrong. Impressed, they both offered to illustrate, and soon Pekar’s story “Crazy Ed” appeared in Crumb’s The People’s Comics. 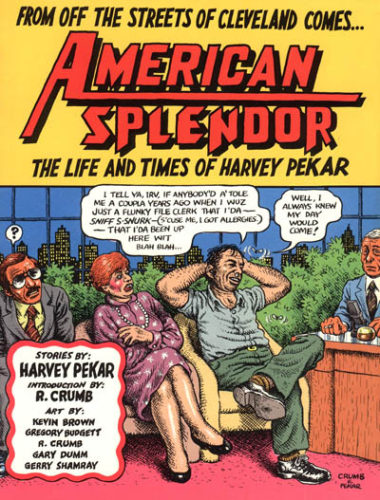 The popularity of his work grew to the point that Harvey felt confident launching his own book. In 1976, he self-published the first issue of American Splendor, filled with stories of his day-to-day existence and takes on his co-workers. Despite some unflattering portrayals, nobody took offense, nor tried to change his views of them.

“When I was working, a comic would come out, and then they’d say ‘how come I’m not in this?'” he remembers. “But they wouldn’t try and do outrageous things. It didn’t get that far.”

As for the main character, an often cantankerous version of Harvey, he only hopes that nobody would confuse the comic book with the man. “I would think he’d think I’m pretty similar, though,” he reluctantly admits.

Though he often lost money publishing American Splendor, the book brought him other rewards. A fan and comic book writer herself, Joyce Brabner, contacted Harvey in 1983. Within two days of meeting face to face, they married.

Since then, they have been each other’s strength, though when asked if Joyce has influence his work, Harvey replies, “not so much.” However, the two have collaborated on one book, Our Cancer Year, which chronicles Harvey’s first battle with lymphoma in 1990. (It recurred again last year, but he has recovered.)

Eventually Harvey tired of doing everything himself. Since 1992, Dark Horse Comics has taken care of production on American Splendor.

Though she’s quick to add, “ultimately that kind of decision here at Dark Horse rests with Mike Richardson, the owner and publisher. Mike also was a huge fan.”

Though she loves her participation on the book, Schutz admits that self-described obsessive compulsive Harvey leaves her little to do.

“He’ll talk to me a little bit about it beforehand,” she says, “but generally he writes the stories as they come to him. He kind of figures out who he might like to draw them. Every now and then I kind of raise my hand and say, hey, how about this person?”

Schutz laughs. “I fix Harvey’s spelling mistakes…he doesn’t make that many, though.”

So is American Splendor that huge a force in the marketplace?

“Does he outsell Star Wars? No,” she continues. “I think Harvey has a very dedicated core group of readers that would seek out and buy American Splendor no matter who was publishing it.” 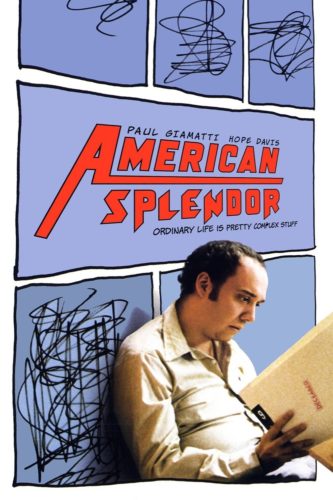 With the release of the film, which won awards at both Sundance and Cannes, that core group may grow larger, and be eager to celebrate this unassuming retiree.

The actual attention, however, keeps Harvey from doing what he loves best. And retiring from the VA doesn’t mean that he will rest on his laurels. Promoting the film, however, has interfered with his plans.

Harvey shrugs his shoulders. “I really need to establish a routine, you know, get up in the morning,” he grumbles. “I’d just like to get back to writing more comics.”