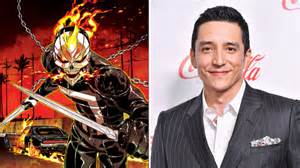 With Disney seemingly on the verge of acquiring Hulu outright, the company is leveraging its IP to the max, with a slew of new Marvel series in the pipeline for the streaming service. Rumors surfaced early in the week that Disney was in talks to buy Comcast/NBC’s share in Hulu, which would give Disney a 90% stake after their FOX purchase. Is it any wonder Hulu would say “make mine Marvel?”

The streaming service announced Wednesday morning that it is going ahead with a planned series based on Ghost Rider.  Centering on Robbie Reyes, not Johnny Blaze, Ghost Rider is still an antihero consumed by hellfire and supernaturally bound to a demon. When he unleashes the Rider, Robbie brings vengeance for the innocents he encounters, but struggles to control the power he wields. The series will be set on the Texas/Mexico border.

Gabriel Luna will play Reyes, having played the part on Marvel’s Agents of SHIELD. However, it will be a new iteration of the character, with no apparent connection to the Agents of SHIELD storyline. Hulu also announced a new Marvel series called Helstrom, making two new live-action series to join Marvel’s Runaways on Hulu. Helstrom seems loosely based on Daimon Hellstrom, also known as Son of Satan. But that’s not going to play well, so Marvel Television has dropped an “l” and likely changed the backstory. Marvel Television previously announced Hulu animated series based on Hit-Monkey, M.O.D.O.K, Tigra & Dazzler, and a mini-series combining all three called The Offenders.

That’s Marvel Television and Jeph Loeb, not Marvel Studios and Kevin Fiege. Marvel Studios is developing at least four scripted streaming shows for the upcoming Disney+ service, which seems to be a higher priority for the House of Mouse. While Marvel Television shows have had a vague connection to the MCU in the past, there is no longer a direct connection between the two separate studios.

Howard the Duck appears to be the most recognizable character in development to cinema audiences, in part to its disastrous 1986 film of the same name, which has gone on to be a cult favorite. Howard also currently lives in the current MCU, appearing in both Guardians of the Galaxy Volume 1 & 2, as well as a blink and you’ll miss it cameo it Avengers: Endgame. Unless things between the two studios change, it appears this would be a separate version as well.