I met Greg Pak in 2002 when he was at Cinequest with a film called All Amateur Ecstasy. It was brilliant and less than 3 minutes. Ever since, I’ve been a big fan of his work, especially his most recent feature Robot Stories, which plays April 16-22, 2004 in San Francisco and Berkeley. Greg was kind enough to agree to answer some questions on shorts, sci-fi and film making in general.

Chris Garcia– I first became aware of your work with Po Mo Knock Knock. You’ve done a bunch of shorts, including Mouse which is another of my personal faves. What draws you to the short form? Now that you’ve done your feature, are you going to continue doing the occasional short?

Greg Pak– I love shorts — I think there are certain kinds of stories or ideas which are perfect as shorts and shouldn’t be done any other way. Mouse, for example, is about a guy avoiding a conversation about pregnancy with his girlfriend by chasing a mouse around his apartment. That could never sustain a feature, but it’s a great little storyline for a socky and satisfying ten minute short.

Also, making short films has been the best way for me to keep working as a filmmaker, to keep learning by doing, in between bigger projects. I want to make a career out of writing and directing feature films, but I’ll absolutely keep making shorts — in fact, I just co-directed a goofy new short film with Susie Lee called Ode to Margaret Cho which is playing in festivals right now.

CG- You worked with NYC Improv group the Pollyannas. I’ve also noticed that you’ve acted in a couple of your own shorts. You an improv guy? Any plans on more acting gigs?

GP- Yeah, I’ve done improv for about fifteen years. I’d love to act more on film, but I’ve foolishly failed to write myself any new roles in any of the screenplays I’m now trying to get made. Not so savvy…

CG- You did Yale for Poli Sci and were a Rhodes Scholar. You studied history at Oxford, yet it seems like you’ve stayed away from documentary. Any plans on going that route?

GP- Actually, for a while my best known film was a short documentary called Fighting Grandpa, which won a Student Academy Award in 1999 and later played on Cinemax and PBS. I love documentary, but I’ve been concentrating on fiction filmmaking for the past few years.

Making any film tends to be all-consuming at different points in time, but documentaries in particular can take over your whole life for years on end. I have an unfinished doc about people’s relationships with wolves which I’ve been struggling with for five years now — I need to get control of that project before I can think about tackling another doc.

David was a great person to have that experience with — he’s a playwright, of course, not a trained actor, but he was totally game and plunged into the warm ups and work with real trust and a completely open mind.

CG– You’re a favorite on the festival circuit, having toured all over with your various films, and have won a stack of awards. How has it changed you as a filmmaker? Has it affected the way you look at your own work as well as those of others?

GP– The best thing about going to film festivals is the chance to see your films screen many times before many different audiences. I’ve learned a huge deal just by seeing how audiences react to my stuff — I’m always making notes in my head about how things work or don’t work. Going to so many festivals over the years also gave me confidence that there’s an audience out there for what I’m doing — certainly the success of my shorts at festivals gave me confidence in taking the plunge to make Robot Stories, and the success of Robot Stories on the festival circuit was a huge part of our making the decision to take the film out for the city-by-city theatrical run we’re currently undertaking. 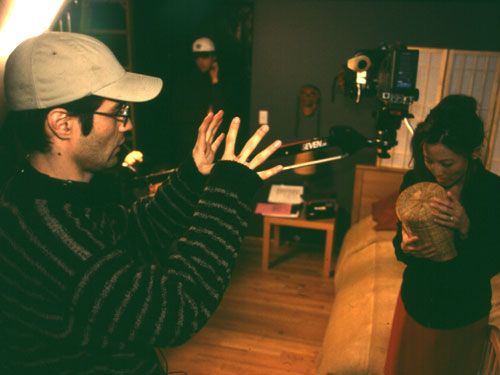 CG- An actress friend of mine saw your feature Robot Stories in LA and immediately mailed me to make sure that I saw it. I had seen it last year at Cinequest, but she was so impressed with it, she had to make sure everyone knew they must see it. How has the reaction to Robot Stories meshed with your expectations?

GP- That’s so cool she emailed you. I’ve been blown away by the audience reaction to the film. There’s this kind of funny transition in the life of a film, a moment where it stops being this private creation and becomes this public thing which you can’t control; which audiences will make their own; which people you’ve never met will experience for themselves. And it’s just an overwhelming experience when the film really clicks, when folks respond on a real level, when you realize that on some level, this film has become part of other people’s intellectual and emotional lives. There have been audience members who stood up and cheered while the film is playing; other folks who have come up to me afterwards in tears. It’s amazing and overwhelming.

CG- Robot Stories is Science Fiction that doesn’t forget that there are real people at the heart of the story…even if one of them is an android. It’s a subtle SF film amid a genre that is known for its over-the-topness. Did you ever find yourself pulling back to keep things from going too Sci-Fi? What where the challenges in keeping the line?

GP- In a strange way, I think my training in improv really helped with this. One of the things I learned from improv was that a scene only needs one crazy thing — once someone brings a penguin into the room, for example, you have plenty to work with. Exploring that one idea, discovering the possibilities and justifying the incongruities of that single thing, is all you need for a successful scene — you don’t need to drag in a watermelon and an elephant and a starship as well.

Similarly, in Robot Stories, each story basically has one crazy thing going on — a robot baby, an android office worker, the prospect of digital immortality… I tried to stay true to exploring that one quirk, to finding some emotional truth or moment at the heart of that one experience. Working in improv taught me the validity of that approach — I never really found myself thinking, “Hey, how ’bout we wedge in that alien airstrike here?” And, of course, the fact that there’s no way we could afford to shoot an alien airstrike helped keep things focused.

CG- I’ve heard folks say that there is a strong Asimov or Silverberg influence on Robot Stories. Who do/did you read that brought these ideas about? Any specific stories or novels or films?

GP- Asimov seems to be the obvious match, but my literary influences are actually more Ray Bradbury and Harlan Ellison, with maybe a bit of Kurt Vonnegut tossed in. I loved these writers when I was younger — I read all of their science fiction short stories and just kind of absorbed that particular style and rhythm of storytelling. In particular, the pairing of fantastic elements with emotionally compelling storytelling comes from writers like these. In terms of actual story ideas, I was inspired by a number of different things. For example, the fact that kids in my high school health classes had to carry around eggs in baskets to learn about how hard it is to take care of a baby led to the egg shaped robot baby in “My Robot Baby.” And a few soul-blighting summer office jobs no doubt led me to cast myself as the alienated android office worker in the “Machine Love” segment of the film. 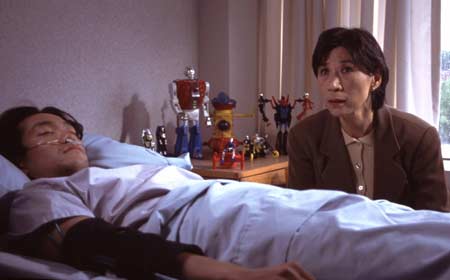 CG- The Robot Fixer segment is one of the most heart-breaking pieces I’ve seen in years. It’s also the least Science fiction-y of the segments. Tell me where it came from, and also, where you got those great toys.

GP- “The Robot Fixer” tells the story of a mother whose estranged son is in a coma; she becomes obsessed with completing his robot toy collection, as if that will somehow help her understand him or bring him back.

None of the stories in the movie are strictly autobiographical, but some of my own experiences certainly inform the stories. I’d lost a number of people very close to me during the time I was writing the screenplay, so the characters’ struggles to deal with death were very close to me. And, of course, those toys in “Robot Fixer” all come from my extensive childhood collection – so I was very familiar and sympathetic to that sometimes pathological collector mentality.

CG- Robot Stories is still going strong around the country. Where can we see it? Is there a DVD coming soon? 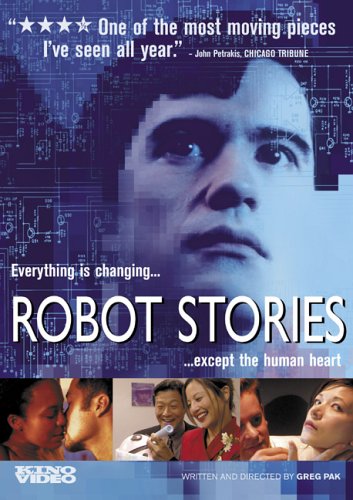 For the latest, including locations, showtimes, and info about cast and crew appearances, visit http://www.robotstories.net.

And yes, we’ll absolutely come out with a DVD. I’m hoping it’ll happen in time for the Christmas season — we’ll see. In the meantime, dear fans, please, please, please DON’T pirate it! We’re a genuinely independent movie, independently produced and distributed, not some faceless corporation– any damage from pirating will hurt us little guys directly and personally.

CG- What’s next for Greg Pak?

GP- In May, I’m going to the Tribeca Film Festival’s All Access program to try to get some bucks to make my newest screenplay, The Dead Boy, a horror/romance about a kid who comes back from the dead to keep a date with his dream girl. And, as always, my producers and I are trying to raise money for Rio Chino, my dream project for a decade, a Western featuring a Chinese gunslinger and a Mexican heroine.

In the meantime, I’m paying rent through writing jobs. In a fanboy dream come true (knock on wood), it looks like I may get a chance to write a comic for Marvel. Wish me luck! (editor’s note: yes, he did write several for Marvel, including Planet Hulk and creating Amadeus Cho, and now Pak currently writes Action Comics and Batman/Superman)

Finally, I’m still traveling a great deal with Robot Stories — I’ll be in San Francisco and Berkeley, Ithaca, Austin, and Dallas for our releases in those towns. Hope to see ya at the movies!