For the past four years, I’ve been working on a book. We’ve been through two publishers and four editors (hence having to go to a second publisher), but finally I Was Flesh Gordon: Fighting the Sex Ray and Other Adventures of an Accidental Porn Pioneer has been published by McFarland Books (huge booth at Comic-Con near the Independent Island). Available now on Amazon, and debuting at Comic-Con, the book tells the story of a kid from Orange County who stumbled into starring in a movie that you don’t even know how important it is… but let me tell you all that in the introduction to the book, which appears in slightly different form here.

“I was Flesh Gordon. You know that, right?”

I did know, but I’d never brought it up. About a year before, Jason Williams hired me to work on a screenplay for an animated children’s film, so of course I’d looked him up on the Internet Movie Database to see what this film producer had done. When we met in person a few months later, I could see it – though in his 60s, Jason still had the build of a movie superhero. Whether Flash Gordon or Flesh Gordon, you could see him fighting evil. In Mark Millar and Gorlan Parlov’s graphic novel Starlight, about an aged space hero coming back for one more fight, it’s a little eerie how much Jason looks like Parlov’s drawings.

Which is all to say that though Jason hired me because someone had recommended me as a writer, he was also getting a major superhero geek. Though I didn’t watch Flesh Gordon until I was in college, I’d known about it from an early age. I was just old enough to remember when adult films had their first moment of respectability – and the newspaper ads for them were right alongside the ones for the Disney movies that I was looking for.

At age 7, I even asked my dad the plot of The Devil in Miss Jones, and it sounded pretty scary to me. When I became an English major, I was surprised to discover its connection to Sartres’ No Exit, of all things. I remember the ad for Flesh Gordon; to me, it was just another parody like Young Frankenstein that I was not going to be allowed to see. But at least I had seen Flash Gordon Conquers the Universe on Channel 2’s Creature Features.

When I got a little older, I devoured magazines like Fantastic Film and Starlog. Occasionally Flesh Gordon would be mentioned n articles about stop-motion special effects and miniatures on camera, and so I became dimly aware that some pretty big names had worked on it. Finally, home one weekend from college, my high school buddies and I rented it on VHS, and laughed hard. It was campy, it was fun, and we quoted the monster at the end (voiced by Craig T. Nelson) for at least a month afterward.

But Jason and I were working on an animated film, and I figured that I’d only bring up his starring role if he did. Because I’d also figured out something that Jason himself told me later – everybody seems to know Flesh Gordon, but they don’t seem to know who Jason is. Yet he’d gone on to star in a couple of crime films with good reputations, and became a writer/director/producer in his own right.

He told me the story about the night of the Westwood premiere for Flesh Gordon. I laughed and told him that we should be working on a book – that story was about a moment of glory, and it was also a little heartbreaking. It was so Hollywood.

And we got back to work on the animated screenplay. When people asked me what I was working on, I’d explain the premise, and then talk about Jason. At the San Jose film festival Cinequest, I was telling Jason’s premiere story to a group of filmmakers and one said, “that should be a movie! I totally want to see that!”

A newspaper writer I know mentioned that his mother wouldn’t let him see the 1980 Flash Gordon, because she thought it was Flesh Gordon. (He’s since seen both.) An actor friend started quoting lines from it, excited because it was a favorite of his. I could see that Jason was right – this film was loved, remembered well by people, but because it was also originally rated X (but so was A Clockwork Orange), it just wasn’t talked about.

At another cocktail party at the same film festival, a friend mentioned that he’d seen Flesh Gordon for a film class in college. (There’s a bit of a pattern here.) His professor had claimed that without Flesh Gordon, there would be no Star Wars. I don’t know who that professor was, but the more I thought about it, the more I could see he was right.

In one of my conversations with Jason afterward, I mentioned that. And he brightened, saying, “oh, yeah, it was Rick Baker’s first movie.” I repeated, “you should write a book!”

Then my friend David Avallone, a comics writer and filmmaker, told me that he had worked on Danger Zone 3, one of a series of films that Jason wrote and starred in. It was starting to feel like fate. Once again, I was reminded that I was working with a guy who’d had a solid career in a tough business, but his one-time spandex suit was better known than he was.

A few months later, Jason called me again. “I want to tell my story. Do you want to write it with me?”

I couldn’t say yes fast enough. Honestly, I didn’t remember much detail about the movie, but I knew Jason’s Hollywood premiere story beat for beat. We retell it in the book you’re about to read, but as we worked further on Jason’s memoir, the Westwood story got knocked down to being my second favorite one.

Because the more Jason talked, the more his stories turned out to be a Who’s Who of the Hollywood scene of the early 1970s. He was there in the early days of the Comedy Store, of all places. (Comedy history being another one of my passions.) He was on the fringes of the L.A. music scene. He bumped into a few figures from the Golden Age of Hollywood, while being central to the Golden Age of Adult Films. This golden boy was also, quite honestly, still kind of innocent – just taking in stride the people he was meeting and the places he was going. That probably kept him out of real trouble in what became my favorite of his stories.

We started working on the book four years ago, coinciding with the 40th anniversary of Flesh Gordon. Jason made his first appearance at Comic-Con International in San Diego that year. Fans lined up at the Sails Pavilion to get a signed print, and then tell him stories about the first time they saw the movie.

Thanks to Jason, I got to sit down with Howard Ziehm, the original producer and director. It turned out that he was a bit of a comics fan, particularly Carl Barks’ Uncle Scrooge work. We had a phone call with the legendary Bjo Trimble, a woman who had loomed large in my science fiction fandom as the person whose letter-writing campaign saved Star Trek. And everyone I talked with about this project was excited – because of course they all fondly remember Flesh Gordon, and Jason’s follow-up film Alice in Wonderland. But that’s another story, told later in the book. 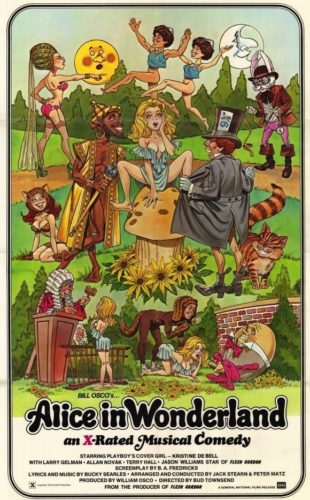 Jason Williams was Flesh Gordon, but he was and is so much more. We talk every couple of weeks about new projects he has going on; sometimes I can help, sometimes I can just say that sounds cool. It’s been a heck of a journey and a story to tell. I just helped tell it; Jason is still living it. 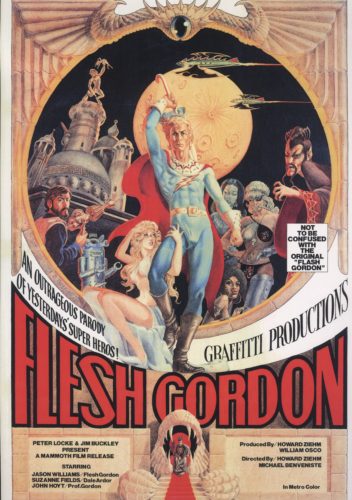 Derek’s note: Flesh Gordon and Cop Killers are both available on Amazon, as is I Was Flesh Gordon.