Even if you’ve never picked up a copy of Violent Messiahs, you’ve seen its alleged hero, Citizen Pain. Over the last couple of years, the book has achieved critical acclaim and more than cult status with its readers. Recently, Image Comics and Hurricane Entertainment released a collection of the first eight issues, The Book of Job, and next week will ship the first issue of the next arc, Lamenting Pain.

Series co-creators William O’Neill (aka Bill) and Joshua M. Dysart weave a tale of a dystopian metropolis overrun by crime – perhaps on purpose. Shadowy powers that be have let Rankor Island go to seed in order to introduce their own hero, the media-dubbed Citizen Pain. Out of their control, however, is a serial killer who considers himself just as noble – The Family Man. And caught between them is one good cop.

It’s tense, gripping, and grittily illustrated by Tone Rodriguez. So when Hurricane Entertainment announced in late July that they would soon be doing The Adventures of Snake Plissken, it was clear that they were just the guys to do the job. Shortly thereafter, CrossGen announced that it would be publishing that title, putting Hurricane solidly in the spotlight at the San Diego Comic-Convention.

Within minutes of meeting Jan Utstein-O’Neill, CEO and editor-in-chief of Hurricane Entertainment, she had gotten us up to speed on the history of the company and convinced us that the company is worth the attention.

A couple of weeks ago, I trekked down to Los Angeles to receive the grand tour of the Hurricane Entertainment offices, and talk to Jan, Bill, and later, Tone about their secret origins, their love of comics, and the future of their enterprise. Thanks, gang, for letting me barge in for a couple of hours on a Friday evening. 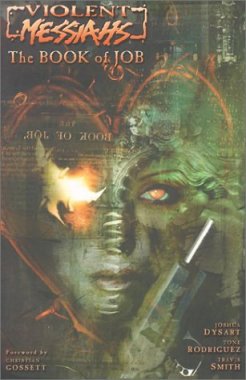 In part one of the interview, we discuss the early days of the company, why Bill became a Californian, and the genesis of Violent Messiahs. (Coincidentally if you’re lucky, you can still find a copy of Violent Messiahs: Genesis at your local comics shop, featuring the rarely seen first version of the title paired with the Wizard ½ issue. Find it, effendi; it’s entertaining, informative, and a must-have in learning how to put a comic book together when read with The Book of Job.)

Derek McCaw: Before you started doing this, Jan, you were a partner in a 3D animation company?

Jan Utstein-O’Neill: Actually, it kind of overlapped. I was partners in that company, and we did characters for games for Disney Interactive and Virgin Interactive. We were building the company, and just as we were building the company, there was a bit of a crash in the industry. Virgin totally went under, and Disney downsized by about 60 percent. Those were our main clients, so we sort of decided that we should put things a bit on hold for a while and regroup. I ended up leaving that and going full-time into comic book work. I was doing both at the same time, which was hard. Difficult.

DM: Bill, where were you before launching your first book, Chassis?

William O’Neill: I was living out in New Jersey, back east. I had some minor jobs, working for some small comic book companies. Then me and this other fellow created Chassis, and pitched it around to a couple of companies at some con in New York, in ’95. And Millennium picked us up.

Jan: I had my own company, Spotlight Productions. I had actually gone down there because of the animation company. We were putting together a very large project. It had 3D animation, animatronics, it was like an opus of a project.

My partners were people from ILM, back from the days of puppetry and so forth. They had moved into 3D animation, and we went down to Comic-Con because we were thinking of doing a 3D comic book based on our characters from a film we were doing together. I was going down there to educate myself on the industry, and that’s when I met Bill.

DM: So you weren’t a comics reader as a kid?

Jan: As a kid I was, yeah. I was an avid comics reader as a kid, and then stopped for a number of years, except picking up comics here and there. Comics about opera, things like that.

Bill: So the Hurricane situation happened when we’re doing Chassis at Millennium, and we’re disappointed at the way they were handling pretty much everything. Other than paying the printing bill, we were pretty much taking care of everything ourselves.

So I floated the idea to Jan, “why don’t we just start up our own company and start doing this on our own?” 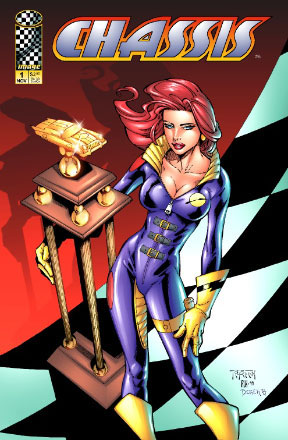 Jan: I thought he was crazy. But I told him that I’d consider doing it if…well, Bill pitched an idea to me.

Jan: He pitched Violent Messiahs to me. I thought there was something there. It was really in its infancy. And I said that I knew a writer in Texas, a friend of mine from back when I was doing film festivals and so forth. And I said that if the two of them could click and if he liked the idea of working together, that I would publish it. And that was Josh (Dysart).

Bill: And so we brought Josh on board. He liked the idea. He was interested in the idea of writing a comic. We started doing all the research and stuff, forming up our own company and coming up with the name.

Jan: Yes, coming up with the name…

Bill: We had this huge list of possible names, which ones sounded best and which ones weren’t taken, things like that. The first book we did was a Violent Messiahs #1, which was in black and white. Again, because we were just getting everything up and running we thought it would be best.

Bill: Yes. That’s one of the things reprinted in that.

Jan: That was in ’97, when the book actually came out. It took a little while. We had already published Chassis, as we said, with Millennium. We were waiting for Chassis #2 to come out with Millennium, and it took a year for them to get out the second issue. And we had decided about that time that we had put out Violent Messiahs #1, and we decided to take on Chassis, so all at once Hurricane was born.

Bill: So we brought Chassis over to Hurricane, and decided to keep doing that book in color. We put Violent Messiahs on the side, just because Chassis was doing better, being a color comic book.

To make a long story short, in ’99 we ended up teaming with Image. First they picked up Chassis, and then that summer we also pitched Violent Messiahs. They picked that up as well.

Jan: And what’s also important, though, is that we actually pulled Violent Messiahs from the shelves. We never put out issue #2. The orders were low, because we were our own company with a black and white book. I knew it was too good. I said this series is too good. I don’t want it to just sort of go off into obscurity because the orders are so low. Somewhere, someday, sometime, there’s going to be a better life for the book.

We pulled it off the shelves. The guys were upset. Josh was very upset. But I promised him that we would publish it again. I didn’t know how or when. Then, like Bill said, we got picked up by Image…

Bill: Through a mutual friend, we found out that Tony (Tone Rodriguez, the artist) really liked the black and white that we did. And he did a pin-up for us. 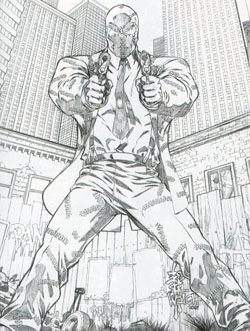 DM: You were the artist on the black and white?

Bill: I was the artist on the initial black and white, and co-creator. I should make clear that I was the original co-creator, and then we brought Josh on as the writer and he just did such an amazing job and added so much to it that he got bumped up to co-creator credits. He added a lot. A lot.

Through our mutual friend, we ran into Tony. He showed his interest in the property, and said he’d love to draw the book if we wanted to re-do it. So it went from there. We took it to Image and they were very excited.

DM: The re-launch, at least from the first issue, seems so much more expansive than the black and white.

Jan: Slowly. Originally, I think we said four. And then we gave him six. And then as we were going…

Bill: Give a writer an inch…

Jan: We pitched it at San Diego in a three-minute pitch to Image in ’99. Literally, three minutes and Larry Marder said yes. To give you an idea of the difference, our print run on the first one was 5,000. That’s the black and white. Our print run on Image for the color version was close to 50,000.

Bill: We were happy.

In part 2 of our interview with the gang at Hurricane, Bill and Jan talk about the future of Violent Messiahs, including what we can expect from the next story arc, Lamenting Pain, on sale next week. From there we get into the book that has brought them a lot of attention from Hollywood over the last couple of months – The Adventures of Snake Plissken!