James Kochalka is a genius: a genius whose passion comes across in every frame he draws. I’ve been a fan since the night I left Spike & Mike’s Festival of Animation with the song Monkey vs. Robot firmly entrenched in my head. Picking up everything by Kochalka that I could find, I quickly realized that he was a new voice that could really change the way I looked at comics, from the Monkey vs. Robot graphic novels, to the beautifully philosophical Magic Boy & the Robot Elf.

He was good enough to answer a few questions for this highly appreciative fan.

Christopher Garcia: You might be the hardest working man in comics, putting out so much material that it’s hard for me to keep up with them all. How many projects do you currently have going? What is on-deck for readers? 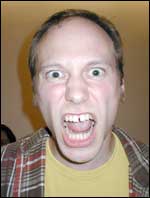 I’m working on a new Fancy Froglin book. I’m writing a prose novel titled Baby Hoo Ha, which in the end will probably be heavily illustrated. I just released a minicomic titled “The Cute Manifesto,” which is an argument on behalf of cuteness in art. It’s part of a series of comix essays I’ve drawn about art and life and philosophy. I’ve got another chapter or two to draw before that book can be collected.

And finally, I’ve begun work on a epic superhero-team comic. I haven’t decided on a title for it, but it’s possibly BOOMBASTIC. I probably won’t finish it before the end of 2004.

CG: A friend of mine has a hundred page dissertation on how Monkey vs. Robot is the battle between our primitive side and our industrial side. I keep telling him to publish it. Any thoughts? What’s the deal with the two different versions (the live action and the animated)?

JK: You’re asking about the Monkey Vs. Robot movies? There’s actually been at least five of them, all made by film students and based on my song Monkey Vs. Robot. Each one has come from a different school, too.

CG: You did the art for Monica’s Story, a rare non-fiction graphic novel that is actually entertaining. Who came up with the concept? How did you approach the art when every American knew what these people actually looked like?

JK: Me, Tom Hart, Jon Lewis and the publisher Jeff Mason came up with that idea together. I actually tried to channel Tom Hart’s drawing style since I knew he’d be inking it. Basically, as far as the way Bill Clinton and Monica look, I just wanted them to be sympathetic. It’s a very human story that was dehumanized by the media. We just wanted to bring it down to the emotional level again.

CG: James Kochalka Superstar has put out some great music, including Monkey vs. Robot, Hey, Ronald Reagan and Bad Astronaut, all of which are on my regular listening lists. How hard is it to work in one graphic story-telling medium and then switch over to a musical story-telling medium? Do you ever have internal battles as to which arena an idea will go into? JK: It’s not a problem at all. I’m just in the habit of creating all the time. I write new songs and draw new comics every day. It’s not a big deal, it’s just what I do. I have no internal conflict between music and comics.

CG: You won the Ignatz for Sketchbook Diary. Why did you choose to show yourself as a elf? Is that the highpoint of your career so far?

JK: I’ve won three Ignatz awards, actually. Two of them were for the diary strips, and one was for my minicomic The Perfect Planet.

There’s symbolic meaning behind why I draw myself the way I do. It’s not just that it’s an elf, but the specific way the elf looks. Also, the relationship between the way the various characters look, it’s all symbolic. Should I ruin it for you by explaining it? I’ll probably explain somewhat in the introduction to the American Elf book.

CG: Let’s not hurt sales by giving it away. Now, you have such an original and instantly recognisable style. Who were your big influences? Who out there today do you enjoy reading?

Today, my favorite cartoonist to read is Chester Brown.

CG: Tell me of your Hot Sauce?

JK: I designed four hot sauce labels for Chicago Comics. Every year they make a special item for Christmas. One year it was my hot sauce. This year they had Peter Bagge design ash trays.