Two weeks back, the news started leaking that something was happening with the animated version of Buffy. A couple of years ago, some work had been done on the concept, with Jeph Loeb, now supervising producer on Smallville and writer of DC’s Superman/Batman, in charge. After the powers that be killed it, word got out revealing that Eric Radomski, of Batman: The Animated Series and Spawn, had been working on the show. Designs by a guy named Eric Wight spread across the web, and it’s his work that we’re liberally borrowing to illustrate this piece. And why not? In an almost unheard of but definitely serendipitous event, the creative team has been reassembled. We’ll let Loeb explain why.

It took a while for Jeph to get back to us beyond a brief confirmation. Evidently Smallville had started back up just as this story broke, so finding time for a Q & A became a tricky task. At last we got the time. And so, here’s what Jeph Loeb can tell us without calling down the wrath of The Master…in this case, Joss Whedon. Sshhhh…

Fanboy Planet: When did this series get resurrected? Do you have a network interested? Is there a target date?

Jeph Loeb: Like all great Buffy stories, this has to do with resurrection. We needed someone to pull the stake out of our show so we could live again. Fox Television did that and we’re very grateful. As to when it appear and where, we’re keeping that under wraps right now! 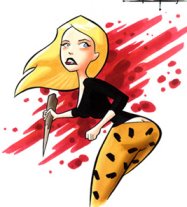 Fanboy Planet: How much of your original team is back on, or are you still working on that?

Jeph Loeb: Everyone came back. It really is wonderful material and we wanted to see it through.

Fanboy Planet: It’s been a couple of years, you’d moved on to Smallville. What was your initial reaction when Joss Whedon called?

Jeph Loeb: Actually, it was Chris Buchanan, who runs Mutant Enemy (Joss Whedon’s production company — but you knew that), who called. We just laughed. It had been so long and there had been so many false starts we just agreed that when it was actually animated THEN we’d get excited.

Joss and I didn’t see each other until the first recording session. It was like we’d been time warped — two years later and here we were again!

Fanboy Planet: Are you going to try to juggle work on both shows, or do you leave Young Superman (as our Japanese readers call it) behind?

Jeph Loeb: No, I’m starting the fourth season of Smallville as the Supervising Producer. Most of what I had to do on Buffy Animated was completed before I left. I had spent a year and a half getting her ready — she just needed to give birth!

Fanboy Planet: What’s the take? Is this still a sort of retelling of the missing moments from their high school days, or will this be post-Angel?

Jeph Loeb: It’s all Buffy Year One. For the fans, we’ve always seen it as Episode 7.5. Buffy has met Angel. He’s this brooding dark romantic character. She doesn’t know yet about Angelus or any of that stuff. It’s quite a lot of fun being able to tell stories that you know what will happen in the years to come!

Fanboy Planet: How much of the original cast will you have — and are there any cool new talents doing voices?

Jeph Loeb: Some of that we’re still keeping as surprises. Alyson (Willow), Nicholas (Xander) and Tony (Giles) have all taken part — that much we’ll say.

Fanboy Planet: Is there anything you’re allowed to tell me that I can’t think of right now?

Jeph Loeb: Well, that would be telling now, wouldn’t it? All we can say is that there will be more announcements throughout the summer! Thanks for the time and keep watching for more news!

So there you have it. What can be known at this time. What Jeph didn’t mention, but we can still safely extrapolate, is that this Year One includes Dawn, as of course, her very existence must have caused major retroactive continuity in Buffy’s life. We’re excited. 2004 looked bad for Whedon fans with the ending of Angel. But now we’ve got a hot comic series (Astonishing X-Men), a movie in production (Serenity — the big-screen version of Firefly) and now …cartoons. You gotta love it.

Now about those Spike TV movies and Ripper…

UPDATE: Four years later, 3 1/2 minutes of the test reel made it online. You can watch it here.