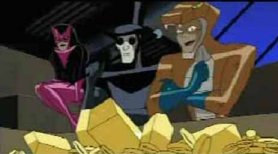 This week in Justice League brings us our first super team of villains. Star Sapphire, Solomon Grundy, The Shade, Copperhead, and Tsukuri are all led by a mysterious woman with powers very much like Wonder Woman. What are her motives? No one knows.

We also get our first glimpse of a Justice League member’s daily life. Wonder Woman goes shopping at a local department store. She feels out of place, which is to be expected since she’s in full costume. Oddly, no one says, “hey, there is Wonder Woman” or even “why is that girl wearing half an American flag and not much else?” Fortunately Batman is able to find her and give her the scoop about what’s going on before she finds more men to rough up in the name of women’s rights.

The head villain, Aresia, gets a full back story sequence, which is a nice detail. None of the other villains are explained, due to Cartoon Network’s airing some episodes out of order. We were supposed to have already seen these other henchmen working for Lex Luthor. Then again, do we really need a back story for a guy in a giant snake costume?

“Fury” is also the first episode to use all seven Justice League members since the pilot. If the JL writing team continues to use all seven members, show us their personal lives and develop their characters, what will I have to complain about?

Certainly have nothing this week. Great job guys.