It’s been awhile since a new episode of Justice League, but the animated super team is back.

Snapper Carr plays “Johnny on the Spot” with his live report of Hurricane Gardner (that can’t be a coincidence) hitting Metropolis. A fire truck races through the streets, but the winds knock some debris into the windshield, sending the truck off the side of a bridge. Superman and Wonder Woman are there for the rescue. Wonder Woman then hears a little girl stuck in a tree (back in my day, it was cats that got stuck in trees), races over and helps the little girl out and back to her mother.

As the mother and daughter have a tearful reunion, Diana gets lost in remorseful thought. Unfortunately she doesn’t see the broken street light hurtling toward her, but Superman pulls her out of the way in time. Sensitively, he asks Diana what is wrong and she explains that she feels bad for having left Themyscira against her mother’s wishes. She decides to return. “When will you be back?” “I don’t know.”

With that, Diana flies off and we are left to wonder why Superman and Wonder Woman never appear to get wet despite standing in the middle of a hurricane. 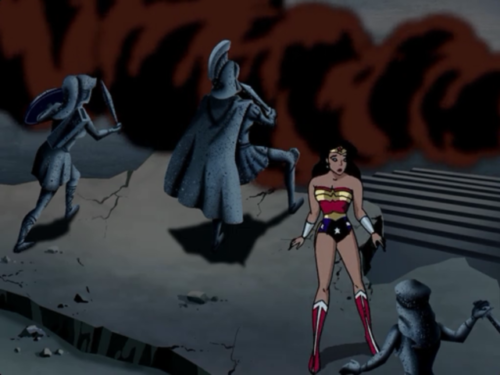 Flying back to Themyscira in Javelin 7, anyone can borrow it, Diana finds her island in ruins. Amongst the fires and debris, she finds her sisters, and eventually her mother, turned to stone. While she grieves, a mysterious figure tries to sneak attack, but she sees him coming. They battle and Diana wins. Turns out the mystery villain is Felix Faust and he turned the Amazons to stone in order to find some rare relic fragment. His goal is to find 3 more fragments and put the relic back together again. Felix agrees to let the Amazons free if WW will find the other relic pieces for him. Wonder Woman agrees and races off. Once she is gone, Felix uses his magical powers to report back to his boss (Lord Hades) that he’s got Wonder Woman under his control.

Wonder Woman radios back to Batman that she needs background info on Felix Faust. Before Batman can ask why, Wonder Woman arrives at the first fragment location. Diana breaks in to the Natural Museum of History it (hey, isn’t that illegal?) but the alarm goes off before she can get the relic fragment. She grabs the fragment and prepares to make a break for it (hey, isn’t that illegal?) but the statue guarding the relic fragment comes to life. If I only had a dollar for every time that’s happened… 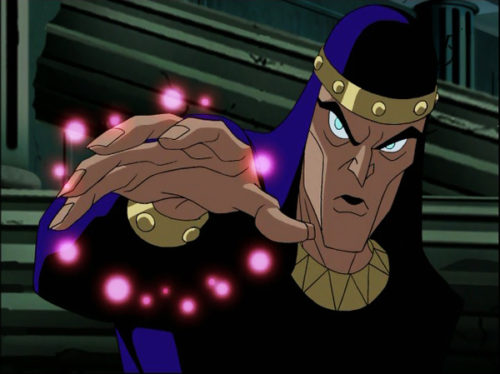 Then something odd happens during the commercial break. Cartoon Network shows a commercial for the second part of this storyline. In it, Faust has all the relic parts, has opened the doorway to Earth for Lord Hades, Flash and Superman fight robotic vines and Hippolyta has been released from stone form, but is now tied up to a rock. Should they not wait to tease us with part two after part one has actually finished?

Anyway, back at the Natural Museum of History, Wonder Woman lays the smackdown on the statue. Superman arrives at the end of the fight to ask “what in the blue hell is going on?”

Wonder Woman explains her situation to the rest of the Justice League (actually only J’onn, Superman and Flash) and they decide to help her out. Awww. Flash and J’onn fly to what appears to be an Aztec temple. Flash races off to grab the fragment, but surprise, when it’s removed from its resting place, bad things happen. I guess Indiana Jones and the Temple of Doom was never a movie in the DCU. 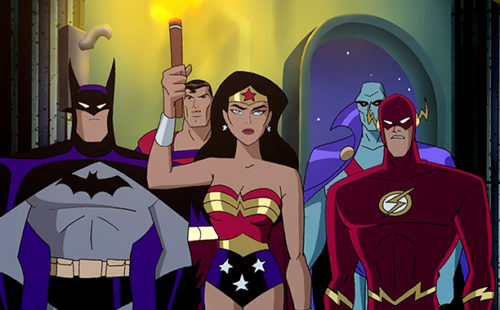 Meanwhile, back in the States, Wonder Woman and Superman fly to a mall (which coincidentally has an Incan theme). The relic fragment is buried under the mall and Superman drills his way down to it. He picks it up. Can you guess what happens next?

Yeah, big ugly things and property damage. While the rest of the Justice League battle their personal demons, Batman scares the beejeebus out of a professor who may know a thing or two about Felix Faust.

This storyline follows the pattern laid down by the previous two storylines. The plot feels like it’s something loyal comic book readers have seen before, but this time it’s animated. While entertaining, the show doesn’t have that “must see” feel to it. Hopefully Bruce Timm and his team will be able to duplicate the “small surprises” that previous episodes had. That at least keeps things interesting.

But seriously, where is Hawkgirl? Is it against the rules to have two superheroines in the same episode (except for the pilot), or did the writing staff finally remember that a girl in a hawk suit is a lame concept? (Editor’s note: All hate mail will be duly forwarded to Michael Goodson.)