From the moment Cartoon Network announced this series, the fan excitement has been high. Bruce Timm and his staff rocked the San Diego Comic-Con with only a slide show and a brief clip of the Justice League fighting off alien spaceships. With drips and drops of information leaking out occasionally (will the JSA be included? Aquaman? Kooey Kooey Kooey?), we’ve whipped ourselves into a foamy lather of anticipation. And this Saturday at 7 p.m., the waiting will finally be over. Only one question remains: are we right to be in such a frenzy?

Happily, the answer is mostly yes. This first three-part episode (initially shown in an hour and a half block) strikes a precarious balance between satisfying comics fans and bringing new viewers up to speed.

The first half hour wisely sticks to the characters that people already think they know. After an astronaut on Mars (the Timmiverse has a much better space program than we do) accidentally opens a mysterious tomb, we flash forward two years to find Batman breaking into one of his own Waynetech Deep Space facilities.

When it turns out that his own employees speak an unrecognizable language, are possessed of super-strength, and are sabotaging the facilities, we can understand Batman’s stealth. But when Superman arrives and is almost immediately incapacitated by a psychic attack, it becomes obvious that the Dark Knight has become stuck in something way too big for him. 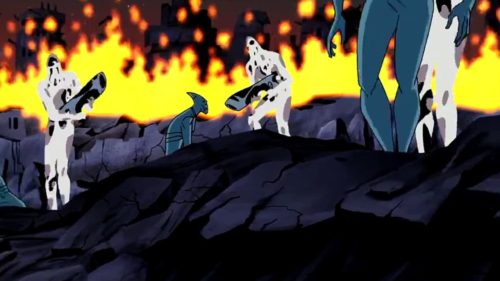 In a nod to the original War of the Worlds, that something comes in the form of tripods from Mars. If only Superman had not been conscripted into destroying everyone’s nukes by that same astronaut from the beginning, now a U.S. Senator. Left with little in the way of effective defenses, Metropolis looks to Superman and Batman. But they need more power.

Far away on a hidden island, a young woman and her mother debate the merits of venturing out to help the world in this time of peril. Elsewhere, a scarlet speedster brags of his abilities. And it turns out that the invaders are not the ones sending Superman the near incapacitating visions.

Of course several heroes end up coming a-running by the second half-hour. As such groupings go, Timm and company have done justice to both Gardner Fox’s original vision and Grant Morrison’s rethinking, with a menace very like the White Martians yet cleverly different from them. But what about this version of the League?

Justice League has a hopeful start. Though it relies heavily on mayhem (cool mayhem) for now, future episodes may find a better balance. And should. Eventually even cool fight scenes become tiresome, and we’re used to great characterization from Timm. Without his partnership with Paul Dini, people will be even more critical. The line-up of future guests will at least keep fans watching, featuring someone for everyone. I’m hooked waiting for Metamorpho.

And just to make sure you get every chance possible to watch it, here’s the Cartoon Network broadcast schedule. After it’s initial premiere Saturday, Justice League will show as follows: 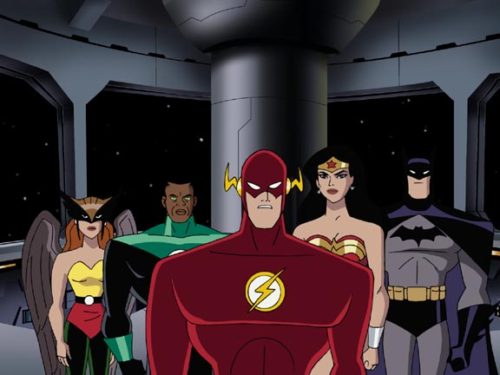