When we last left our heroes, Lord Orm had taken control of both Atlantis and a nuclear sub. Aquaman had been falsely accused of being a traitor and the Justice League was trying to solve the mystery of Aquaman’s assassination attempt.

As we join our story already in progress, Lord Orm throws Aquaman in prison (well, not really, we later find out). Mera arrives in the throne room to ask Orm about the rumors of Aquaman’s return. He lies to her as well as informing her that her son (heir to the throne, Aquababy) has been taken from her custody for safety reasons.

In the Javelin, Green Lantern, Superman, Wonder Woman and Martian Manhunter travel to Atlantis to give Aquaman some important clues they have discovered. Atlanean security patrols open fire on the superheroes which leads to their capture.

In Lord Orm’s throne room, the Justice League members are held captive and their powers negated. They tell Lord Orm that they have proof that the assassination attempt on Aquaman was perpetrated by an Atlantean, not a surface dweller. Lord Orm declares this a lie, but Mera over hears the whole thing and she figures out what’s what.

The JL are sentenced to death by drowning. While the heroes struggle to breathe, Lord Orm travels outside the city to a remote location at the bottom of the sea. There on a cliff near an open trench which leads to a lava filled rupture in the Earth, is Aquaman in chains. Aquaman calls Orm tuna breath and Orm responds with “I know you are, but what am I.” Orm then secures Aquababy to the rock face next to Aquaman and with a wave of his magic staff, a blast shatters the rock both Aquapeople are attached to. The rock face slides slowly down the cliff towards the lava as Lord Orm rides off.

Unable to free himself and his baby from the chains, Aquaman…well, he does something you’ll never see on Rugrats.

In the end, bad guys lose and good guys win. Like the previous episodes, this story line was nothing groundbreaking in terms of the Justice League, but it was still a good solid effort. Green Lantern’s character is starting to develop more as the militaristic type (despite any overt reason why he’d have that kind of personality). 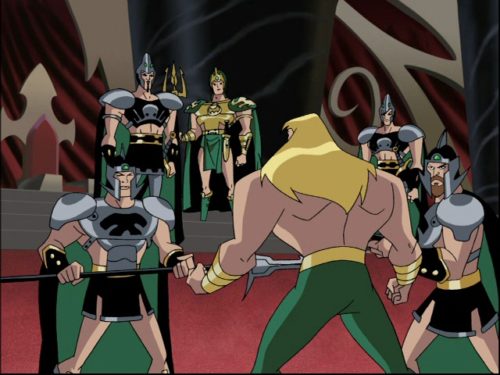 Actually, with this episode, Wonder Woman is the newest underdeveloped character. Bruce Timm has stated that Diana will be more of an aloof princess than she is in comics, but three plotlines into the season and she’s really just the “other girl.”

The show’s biggest weakness is that it still assumes the audience knows everything about the characters because of the comics, even when they take creative license with them (how long has it been since Aquababy was killed by Black Manta? Twenty years? – Derek). They need to remember that a lot of kids (and yes, kids do watch Cartoon Network) are meeting these characters for the very first time. And from there, they might start reading comics again.

The obscure DC character cameo this storyline was Deadshot (voiced by Michael Rosenbaum) who came off looking cool, yet weaselly. I presume that Flash wasn’t in this episode since Michael Rosenbaum also does his voice, and we wouldn’t want anyone to realize that Flash and Deadshot have never been seen together…wait a minute…

Hawkgirl was a no show for both parts, for no obvious reason. Maybe she was getting her talons done.

For whatever reason Cartoon Network has decided not to show any new episodes until February, so if you have missed any of these, you have plenty of chances to catch them again. Or you can do what editor Derek McCaw does, and beg someone to loan him their tape.