This week’s Justice League borrows from a number of other genre films in order to deliver the best story arc yet.

As we join our heroes, J’onn and Superman are preparing to detonate an asteroid that is headed for Earth (Deep Impact, Armageddon, last month’s news). Hawkgirl monitors their work from the JL headquarters. Right before the asteroid goes boom, Hawkgirl realizes that it has pockets of hydrogen in it. It’s too late to stop the explosion and the added hydrogen makes the explosion much bigger than anticipated. J’onn and Superman blow themselves into deep space.

While unconscious, J’onn and Superman are picked up by a space ship (Jawa sand crawler) that happens to be passing by. They are locked away in the ship’s jail. The captain and his crew discover that Superman is a Kryptonian and agree that he will make a fine specimen for Warworld.

On Warworld all the citizens have flocked to the local coliseum to see the gladiator match of the day (Gladiator). Draaga, the current reigning champ, has a match and wins it easily. Too easily for the likes of the ruler of War World, Mongul. Mongul radios to the captain of the ship that picked up Superman and J’onn, demanding that he bring him better contestants. The captain promises he will. Meanwhile, Green Lantern and Hawkgirl are hot on the ion trail of the ship that has kidnapped their super pals. 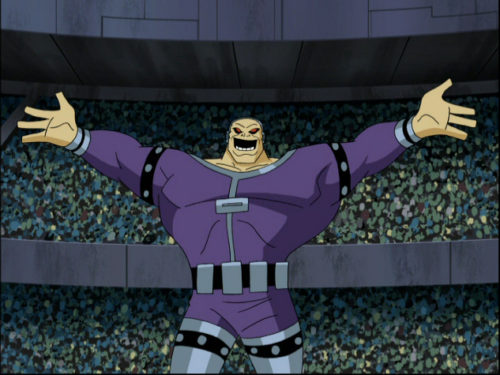 Superman and J’onn wake up in a new jail cell, this time on Warworld, and J’onn weak due to “something in the atmosphere.” While that weakness does become an issue later, it is never explained. Anyway, they fight their way out of the building. As they try to leave town, they are stopped by a force field. J’onn is able to escape due to his ability to turn intangible, but Superman is recaptured.

Mongul, upset that Superman tried to escape, wants to make an example out of the man of steel. Rather than having qualifying matches before fighting Draaga, Superman will fight the champion first.

Green Lantern and Hawkgirl have followed the ion trial to a refueling station and are questioning the locals about the whereabouts of their friends. Green Lantern uses emotional intimidation on the local scum while Hawkgirl prefers the “throw punches, ask questions later” method.

The time comes for Superman and Draaga to fight. They are transported to a post-apocalyptic setting and left to kill each other for the amusement of the television audience (The Running Man). The two go at it like Kirk and the Gorn, but ultimately Superman wins. Mongul asks the crowd if Draaga should be spared and they vote a resounding “no!” When Superman refuses, Mongul tells the guard to kill him.

On a somewhat off topic note, Cartoon Network showed a funny commercial at this point involving the old school Superfriends. Aquaman and Wonder Woman are tied up and being lowered in to a pit of goo as the Legion of Doom watch on. Just as all hope is lost, the Power Puff girls save the day. There is just something very funny about the Power Puff Girls kicking the butts of Solomon Grundy and Sinestro.

Back on Warworld, Superman has taken everything the guards can throw at him, but is still standing. Superman still refuses to kill Draaga, who himself is begging to be killed because he feels it is more honorable to die on the battlefield than in a jail cell (Klingon mentality). Still Superman refuses. Watching the battle from the stands, J’onn manages to turn the crowd in favor of Superman. They all chant for Superman and Mongul is forced to spare Superman’s life. I’m going to count that as the first time a superhero’s life has been saved by the power of the wave. Superman is sent back to his holding cell.

His fellow prisoners now look up to Superman for having stood up to Mongul. They offer him escape on a garbage scow. Superman refuses to leave without J’onn. Draaga is also in the jail cell, still unconscious from the fight. Superman tells his fellow prisoners that Draaga deserves to escape more than he does anyway.

Whether it’s comic books, movies or animation, Superman is just a swell guy.

Next we see the garbage scow dropping Draaga off on a mysterious planet. He’s pretty pissed off about it, too, and swears vengeance on Superman for taking away his honor and then treating him like garbage. He’s apparently really serious about it because he burns the letter S in his chest to remind himself. Maybe he just has a short memory like that guy in Memento.

Hawkgirl and Green Lantern have hitched a ride with some space pirate that says he knows the way to Warworld. While the duo bicker in the back of the pirate’s ship, the pirate gases them and drops them off on a deserted planet. The planet turns out to be the same one that Draaga was dumped on and as luck would have it they meet. Draaga offers to take GL and HG to Warworld. 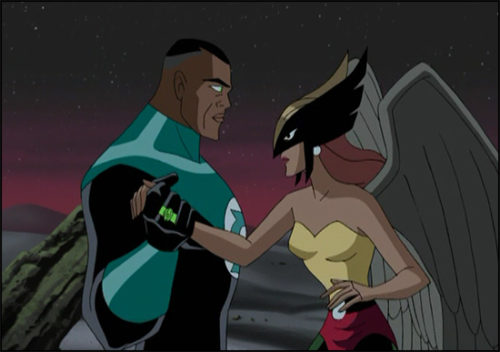 Back on Warworld, the citizens are showing their support for Superman by tagging his S symbol all over the city. The news of the uprising spreads to Mongul who vows to show the Kryptonian the meaning of fear. Meanwhile, Draaga ditches GL and HG before they can ask about the big letter S on his chest.

Superman is taken to Mongul’s throne room where the tyrant tells Superman that he will continue to do what he says. When Superman disagrees, Mongul tells him that he has a weapon that can destroy a planet (Death Star) and if Superman doesn’t cooperate Mongul will destroy Draaga’s home planet. Superman has no choice but to agree. Mongul offers Superman a deal. Superman will have one more fight against Mongul and Superman must promise to lose big.

Justice League is really starting to get better and better. Rather than have a storyline focus on one particular superhero, everyone got a chance to shine this time. Even the character development has improved. Green Lantern and Hawkgirl bickered with each other the entire time but there was a tender moment on the isolated planet where you thought the two of them could develop a thing for each other.

Cartoon Network hasn’t really given the show a chance to build much momentum, with a time slot change and numerous reruns, but they are promising a new episode each Sunday night through the month of April. With the way the show is beginning to hit on all cylinders it should be a fun ride.