From the opening shot that evokes the cover of Kamandi #1 by Jack Kirby, the DC Showcase short “Kamandi: The Last Boy on Earth” grabs your attention and never lets go. In less than 10 minutes, we’ve got Act 1 of a terrific saga, painted in loving tribute to King Kirby. The only disappointment is that it’s not (yet) a full-fledged feature.

As the DC Showcase shorts in general have taken more risks in style, it should come as no surprise how beautiful it is. The backgrounds look as if they were taken directly from Kirby panels. Director Matt Peters has guided character design that evokes the master, though simplified (as it has to be for animation) to look as if maybe Wally Wood were inking. Ben Boxer (Armen Taylor, also voicing Jay Garrick in Justice Society: World War II) looks the most like he stepped out of a Kirby panel. (I’m purposely not using stills from the short — it really should be experienced fresh.)

And if you’re unfamiliar with the world of Kamandi, set in the future after “the Great Disaster,” the short gives you everything you need to know. In a post-apocalyptic world, Kamandi (Cameron Monaghan) runs with an evolved tiger, Prince Tuftan (Steve Blum). Several animal species have gained sentience and formed societies, with the most dangerous being the gorillas. Yes, Kirby created Kamandi after he couldn’t get the rights to Planet of the Apes, but I’d say he improved on the concept. Captured alongside the artificial man Ben Boxer, the trio must undergo trials that set the stage for further adventures. Yet the script by Paul Giacoppo still fits in how Kamandi got his name.

Crisp storytelling leaves only one mystery: why haven’t we gotten a Kamandi movie? Animated would be fine, but Warner Bros. could market the heck out of this as a live-action film. Kids would eat up the toys — in addition to Kamandi, you have a silvery humanoid with Ben Boxer, you have a TIGER MAN! You have GORILLAS! Doctor Canus didn’t make it into the short but… there’s a race of Dog Men! And the villains are RAT PEOPLE! It’s a no brainer, as proven by Teenage Mutant Ninja Turtles. And I’ll pit Kamandi’s mutant grasshopper steed against Battlecat any day of the week.

For now, we have this short, included on the disc for Justice Society: World War II. For Kirby fans, it’s worth the price of the disc by itself. But we do want more. 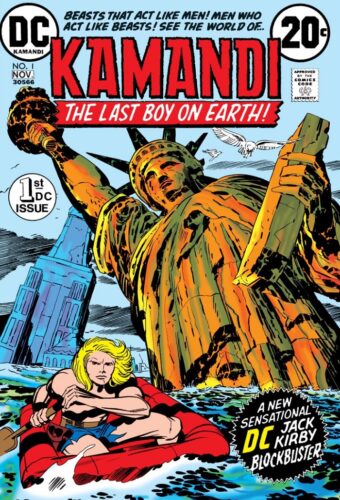 You can buy a compendium of original Kamandi comics here.

We are affiliated with both Bookshop.org and Amazon. As such, purchases made through links may generate revenue for this site.