It’s always cool for us to meet a guy on his way up and see the climbing continue. A couple of years ago, we met Keith Champagne at a Comic-Con when he was inking JSA and had just pitched a one-shot story for the last incarnation of the Legion of Superheroes. Since then, he’s written a three-issue JSA arc, inked Firestorm and occasional Batman issues, and created Armor X, a mini-series from Image. Heck, he even guested here and wrote a wrestling column. But what should have DC fandom talking right now is his work on Green Lantern Corps. Champagne has begun a credible explanation for why the little blue men put up with Guy Gardner by introducing a black ops division to the Corps — one much older than Guy Gardner could have expected. It’s a concept that adds subtext to older stories — you have to wonder what the Oans didn’t tell the brighter shinier Lanterns — and definitely marks Champagne as one of our own (fanboys) made good.

He’s got more coming up that he can’t talk about yet, but he still agreed to let me toot his horn by doing this interview. 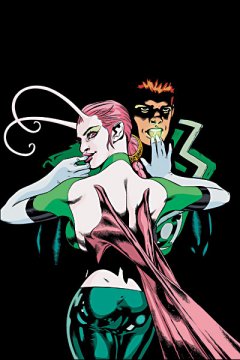 Derek McCaw: How do you pronounce Green Lantern Corpse, and am I missing some military term I’ve just never known before? Because I’m pretty much thinking “dead body.”

Keith Champagne: CORPSE. As in…CORPSE. As in dead body. As in just what you were thinking.

Derek McCaw: Explain, if you can, the genesis of this. Did DC approach you with this idea, or was it yours? Do you get full credit here as “creator”?

Keith Champagne: The idea of a Black Ops division called THE CORPSE came out of my head. In fact, I was told the other day that I need to sign equity forms for Von Daggle and R’amey Holl, the two new characters introduced in this arc, in case DC Direct makes action figures. The great Pat Gleason also gets credit, as he designed the visuals for both characters. But anyway, long story short, Pete Tomasi asked me to pitch him a GLC idea. I’ve had the idea for The Corpse in the back of my head for a couple of years, he liked it, and now we’re off and running.

Derek McCaw: While some companies (-kaff kaff- Marvel –kaff-) seem to be playing havoc with continuity, you come along with this story that ties a lot of elements together. You reference “Invasion,” and you not only use a Durlan, but one that’s probably an ancestor of Chameleon (Boy). Why not just tell a cool story?

Derek McCaw: I’m not saying that — just that it’s really steeped in references to continuity.

Keith Champagne: First of all, I’m a fanboy at heart. I got my jollies buying stuff like INVASION back in my teenage fan days and to me, it’s just fun to reference something I enjoyed as a kid now that I’m an adult and I’m lucky enough to do this for a living. Plus, I knew that I wanted to do something with the Dominators and I always felt like there was a ‘hole’ there. They got their asses kicked at the end of the day and I had to think that would still bother some of them, even all these years later.

As far as using a character like Daggle, who may (or may not) be an ancestor of Chameleon Boy… Why not? It’s just a little easter egg thrown in there, the sort of thing that I enjoy reading in comics. It adds a layer of texture to the character, and hopefully adds a little bit of fun to the story for the people who read into it. One of the cooler things about working in a shared universe with so much continuity is that it gives plenty of opportunity to layer little things like that in there.

Derek McCaw: Why do so many alien races have names that come from Earth words for what they resemble? (At least the Papilli comes from French.)

Keith Champagne: Because Earth is the center of the Universe and all life originally springs from its loins. Also, I feel like something like that grounds an alien character in a reality that makes a little more sense. Let’s face it: all alien characters basically act human anyway–they just look different.

Derek McCaw: If the Corpse takes off, it looks like Guy Gardner has finally found his place in this new Earth order. Do you feel that he has kind of floundered (though fun as a character) for a while, and that this new direction will finally be the one that fits?

Keith Champagne: Actually, quite the opposite. I feel like The Corpse is the worst possible fit for Guy Gardner. The Corpse is about stealth, working behind the scenes quietly, and killing when necessary. Nothing about the concept fits Guy at all…which is exactly why I threw him in the mix. Usually a character arc will grow out of a contrast like that.

Derek McCaw: Is the Corpse like the Illuminati? Will we be seeing that they’ve been working behind the scenes all along? And would that make Guy Gardner more like Iron Man or Black Bolt?

Keith Champagne: The Corpse has a long, unexplored history working in the shadows of The Green Lantern Corps. The history of the division is nothing that will be explored in depth–at least not in this specific storyline–but it’s strongly suggested they’ve been around for quite a while.

And actually, Guy is like Captain America. He’s strongly principled, cares deeply about doing the right thing, and will fight to the end if he believes in something. He just talks a lot more (and a lot more loudly), something I think he does to cover up the fact that he cares so much.

Derek McCaw: In the recent DC Infinite Holiday Special, you wrote the one story that wasn’t about new characters or takes that DC is trying to get us to spark to – what kind of selection process did you go through on that one?

Keith Champagne: DC wanted to anchor the book with Green Lantern and that was the story I was offered. There’s not much more to it than that, really. I came up with a little tale that was actually a love letter to my father disguised as a Green Lantern story. And he was touched by it, so I felt like I did my job well on that one.

Derek McCaw: That story also got penciled by the mercurial John Byrne. How was it to work with him, both writing and then inking his pencils?

Keith Champagne: It was a career highlight. John Byrne is my hero. His work, and Alan Moore’s, are the two people that inspired me towards a career in comics. I wouldn’t be here plugging away if JB wasn’t such a huge influence on me. I don’t know John personally but we’ve emailed back and forth a bit and he seems like a nice guy to me. I learned a lot from seeing how he interpreted my script and I got to live out my fanboy dream by finally inking him–even if it was only ten pages. I was nervous about it and he was gracious enough to give me some good advice about how to approach his pencils.

John was nice enough to express that he liked my inks but I didn’t personally feel I was a good match over his pencils. His stuff is loose; all the info is there but he leaves a lot to be interpreted. It’s a balancing act and I felt like I lost it on some of the smaller faces, especially. Overall, I found him to be nothing but a gentleman and a professional. I’m planning on working with him again as soon as I can but only as a writer next time. I’d like him to either ink it himself or be teamed with an inker more compatible with his work.

Derek McCaw: Where can readers find your work next?

Keith Champagne: Green Lantern Corps #8 comes out today, 1/10. Check it out! I’m currently writing a big, 52-related project that will be solicited shortly. I can’t talk about it or name it until DC lets the cat out of the bag. I just wrote a 12-page Two Face story for this year’s Batman Annual. I believe I’m doing more Green Lantern Corps(e) coming down the pike, as well as taking over the writing chores on a current DC monthly that I can’t name yet. And I’m inking Nightwing every month over the great Jamal Igle. It’s going to be a busy–yet fun–year!