Actress Keri Russell makes her animation debut as the voice of the title character in Wonder Woman, the next entry in the popular series of DC Universe animated original PG-13 movies arriving today (March 3) from Warner Premiere, DC Comics and Warner Bros. Animation. Warner Home Video is distributing the all-new film, which will also be available OnDemand and Pay-Per-View as well as available for download today. Russell is best known for her Golden Globe-winning lead role in the popular television series Felicity. One of the Mouseketeers on the 1990s incarnation of The Mickey Mouse Club, Russell has appeared or starred in numerous films and TV series, including Mission Impossible III, The Upside of Anger, We Were Soldiers, and the recent Bedtime Stories. The New York-based actress drew widespread acclaim for her performance opposite Wonder Woman co-star Nathan Fillion in last year’s Waitress.

Following her first-ever voiceover recording for an animated film – that would be Wonder Woman, coming out today – Russell chatted about the cool factor of owning an invisible jet, Halloween costumes of her youth, potential future Russell-Fillion co-starring roles, and a super hero supplies store. True story. 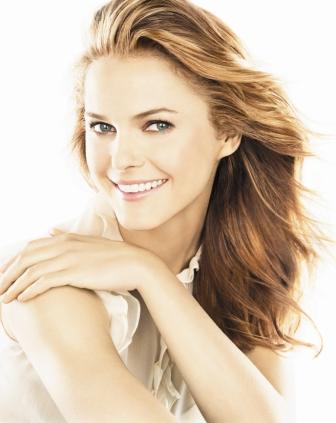 QUESTION: What was the extent of your knowledge of Wonder Woman before accepting this role?

KERI RUSSELL: I have vivid memories of being four years old and my mom making a Halloween costume for me – and I was Wonder Woman, thank you very much. It had the tiara and the wristbands, and I remember my younger sister was clearly upset that she didn’t have that costume. I’m standing there very proudly in my Wonder Woman outfit, and she’s standing just naked in a diaper and a cape, looking at me as if to say, “Where’s my costume?” So I guess that was my first official Wonder Woman stint.

Obviously, growing up, I knew of the show. I can remember folding laundry with my mom while watching Lynda Carter on TV. So I knew a little bit, but I didn’t know all the depths of the story we discover in this film. Ultimately, she’s a very cool, strong, female warrior.

QUESTION: What do you find enticing about this story and the character arc of Diana/Wonder Woman?

KERI RUSSELL: I think the good stories are those where the character decides to break away and do something different. In this case, Diana is at that age where she’s breaking away from her mom, and from the whole island of Amazon women. She wants to explore. She’s walking that fine line of child and good kid, and wanting to become a woman who can make her own choices and explore the world.

QUESTION: “Wonder Woman” is filled with action and humor, but can you discuss the love story aspects of the film?

KERI RUSSELL: I think love is a great catalyst for many characters to further the story or their own growth, and in this film Diana is intrigued by learning about man and the outside world. Seeking that knowledge and experience definitely propels her forward, and away from the safe haven of her family. 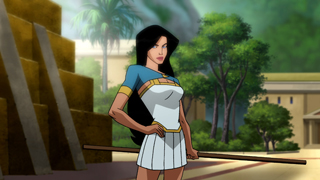 QUESTION: How do you feel about stepping into a role like Wonder Woman that could very well inspire a future generation of females?

KERI RUSSELL: Any story that inspires you is great, male or female. It doesn’t have to be one or the other. I just think Wonder Woman is cool (she laughs). She’s got her invisible jet, and her armbands. There is something to be said about the gender issue, but I think more than anything Wonder Woman was just a good, cool comic, and that’s why people read it. It wasn’t like just throwing one to the ladies. She was tough and smart, and her super powers were cool, so that’s why I think Wonder Woman has staying power.

QUESTION: How did you arrive at the voice used for Diana/Wonder Woman?

KERI RUSSELL: I was trying to focus on her differences – she’s a true, strong warrior, but she’s also right at the break of being a young woman standing on her own and fighting out in the world. So it was a question of playing the innocence in her voice against the strength of a warrior, and then balancing that against Virginia Madsen playing her mother with such warmth and wisdom already in her voice. So finding Diana’s voice was trying to figure out how to walk that line.

QUESTION: Was there anything in particular that made you agree to make this your first animated performance?

KERI RUSSELL: I personally adore origin stories – they’re so intriguing, learning what shaped and formed a character. And this story is funny and action-packed and adult in a nice way. Then they said Nathan Fillion was playing opposite me, and that made it that much better. I adore Nathan and, after spending so much time with him making “Waitress,” I could hear exactly how he’d read every line while I was reading the “Wonder Woman” script. Then you’ve got this great cast with Virginia Madsen and Alfred Molina and Oliver Platt – so I kind of wanted to do it to be in the cool kids’ group.

QUESTION: You and Nathan Fillion just came off the acclaimed “Waitress” and now you’re back together – and with seemingly great chemistry – in “Wonder Woman.” Can you frame that relationship for us?

KERI RUSSELL: Nathan and I have decided to do all our movies together, animated or non-animated (she laughs). Can you imagine it? In our next film we’ll be playing Jamaicans – it has nothing to do with anything, but we’re just going to be in it together (she laughs).

Nathan Fillion is so lovely, and so funny – he really is a huge part of the reason I took this. When I heard he was doing this, I thought, “Oh Nathan’s doing that voice – I want to act with him,” even though I don’t even see him once the whole time we’re recording this. He’s so funny for this – he has the old kind of 1940s swagger, that sharp rah-rah-rah dialogue that he does so well, and it’s written so well for him in the script. I think he’s perfect for Steve (Trevor). I just want to know what we get to do together next. 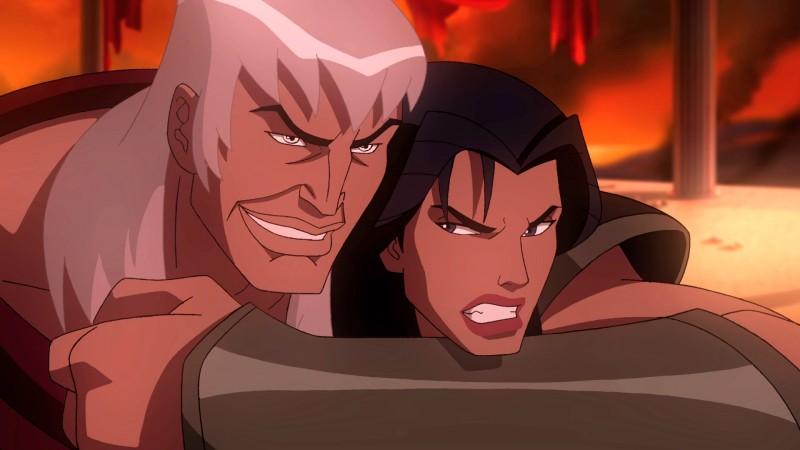 KERI RUSSELL: I love watching animated films, so it sounded exciting and fun because I had never had the opportunity to do voiceovers before – and ultimately, recording this film was a blast. There were some challenges – I haven’t been impaled too many times in my life with swords and spears and things like that – so I didn’t have a lot of experience making those sounds.

Voiceover work definitely requires it’s own specific muscle. And because you’re not seeing what you’re recording, and all these things are going on, you really have to use your imagination and stay focused and kind of be able to tap your head and rub your belly at the same time.

Luckily they surrounded me with people who really know what they’re doing – to guide me through the technicalities that I had never done or used before. I loved being in this little dark room and not having to worry about the way I looked or anything other than just really concentrating on the intention of the words on the script.

QUESTION: Do you take any guilty pleasures in playing a super hero?

She’s the epitome of amazing. I mean, she’s WONDER Woman! My husband is having a good time with that. As I was leaving the house, my husband was already making jokes about me being Wonder Woman. But I do take some pleasure – and pride – in being chosen to play this role. 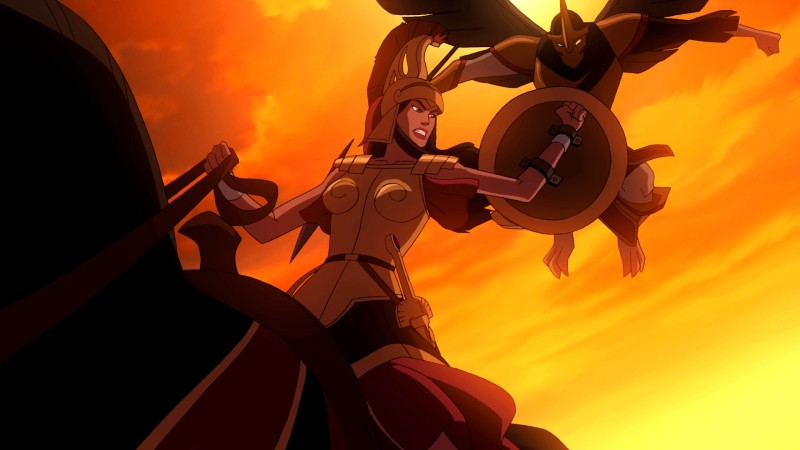 QUESTION: Is it difficult for women these days to find a good role model?

KERI RUSSELL: I think they’re out there. Growing up, I would say Wonder Woman and Nancy Drew were definite role models for me. Historically, I know Amelia Earhart stands out for me. Even today, there’s no shortage of female role models. They’re everywhere – in history, in literature, in the news. Just look around.

QUESTION: Do you ever wish you had some of Wonder Woman’s goodies – like an invisible plane or lasso of truth? 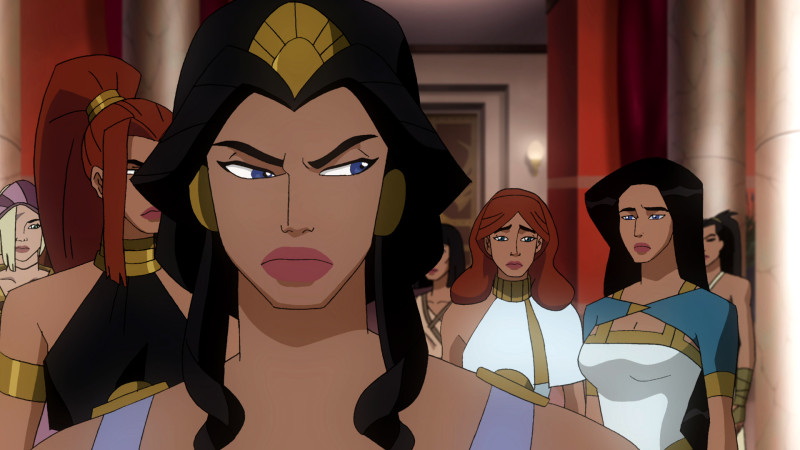 QUESTION: Now that you’ve been chosen to play Wonder Woman, has the super hero world revealed itself to you in any greater detail?

KERI RUSSELL: The funny thing is that my husband and I were going to brunch in Brooklyn, and across the street, all closed up, was a shop with this big sign that said, “Super Hero Supply Center.” It’s set up like a real store. Inside, there’s cans of what looks like paint, but when you look closer, it’s like anti-gravity powder, and then there’s advertisements inside for maps to find your best hide-out, and a rack with capes on it. It’s filled with all these actual super hero supplies. I think we figured out that it was either for little kids or a creative writing workshop place.

We want to find that place. In the meantime, thank you, Ms. Russell and…people, get this DVD. Seriously. 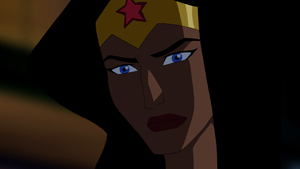