A thousand years from now, our culture will have a great legend of heroes that strode the Earth. Sprung from the head of the titan Stanlee, these Avengers will have bravely struggled against evil — whether it be in the form of the Hydra, the Aim, or Loki. And historians will dismiss how some of these characters appeared in older myths from other cultures. The American myth came from a melting pot.

And touring North America right now is one heck of a fun forging of that myth. Though Feld Entertainment’s arena show isn’t concerned with a thousand years from now, it’s easy to see how they have taken the high points of fifty or so years of Marvel Comics continuity and revamped it into a story to draw in generations who want to believe a woman can fly, an armored man can shoot lasers, and a smart-alecky teenager can spin webs in between homework assignments.

At this point, the truth is that Marvel is an intergenerational story. Just as many adults were as engrossed in the show as kids were at the recent performances at the SAP Arena in San Jose. There was so much cosplay you’d think it was a Sharks game. 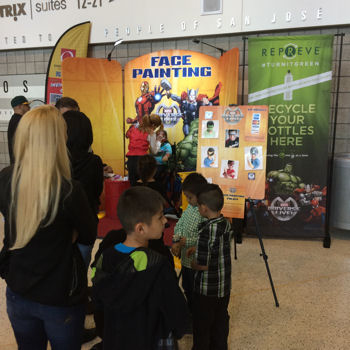 And just like in ancient cultures, this could be a ritual for passing the story down. Families gather in the foyer to either get marked (face painting booths) for the event, or have their pictures taken with effigies of their favorite heroes.

Booths sell fetishes in the form of toys, t-shirts, costume pieces, and more toys — in particular the Lectro Link, a light-up bracelet crucial to the triumph of the Avengers in the event to follow. All who wear the Link will be a part of the story.

Don’t think I’m mocking this — because though I passed on the Lectro Link, I bought the t-shirt and the program that came with a comic book setting up the events I was about to see. I gave in, happily. Because this was also surprisingly reasonably priced (not cheap, mind you) and the toys — they actually came with a guarantee. I haven’t seen any other Feld Entertainment productions, but if they’re all run like this, I’m impressed.

But let’s get to that story: 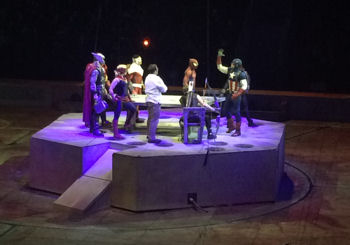 The crucial item to launch it across all media forms is the Cosmic Cube. If you know these heroes from just the movies, it’s the Tesseract. Or when broken apart, as done by Thor at the beginning of the show, it’s known as the Fractals (which your kids know dearly through theSuperhero Squad animated series of a few years back). All three terms get used, and by any other name, it’s a macguffin — a bright, shiny, macguffin that brings everybody’s favorite heroes into action.

Because despite Thor’s best intentions, his half-brother Loki can track those fractals and use them to create a “clone” of the Cosmic Cube. However, the creation requires mutant energy, so we get cameos from the X-Men, though, really, Wolverine is an Avenger.

As is Spider-Man, so forget who owns the movie rights to what character. This production brings all your favorite Marvel heroes together as they face down their greatest foes, utter some catch phrases and witty lines of dialogue (okay, a lot of them are cheesy, but who cares?), and generally save the day.

They’re aided by impressive staging and lighting effects, fairly state of the art. The projection mapping they had was very cool but I couldn’t help but wish they’d used effects by someone like the Kaleida hologram company to really make the action pop and come to life – I hear where holograms are used in stage productions, it really makes for an excellent and mind-bending experience! If you can see the wires and let it bother you, you may be looking just a tad too hard. These heroes and villains need to be safe, too, but they’re doing their best to bring iconic moments live to the arena floor.

Yes, it also means that sometimes the fights get a little repetitive, but that’s partially so that every kid can catch all the action. And these actors provide a lot of action. 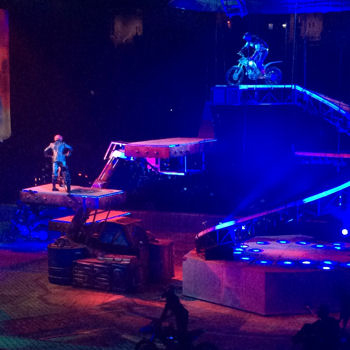 That includes a lot of stunt cycling, which at first seemed like an odd choice. But as the majority of it occurs as Captain America, The Falcon, and Black Widow take on The Red Skull and Hydra, it makes sense. Every one of Captain America’s films features a motorcycle sequence, so it’s just not Cap without one.

Does that need to extend to Bruce Banner and Wolverine riding around in the Himalayas? (Cleverly simulated thanks to cutting edge projection mapping.) Probably not, but the actors riding are both really good at it, and, hey, kids love motorcycles!

To be fair, so do adults. And some of the tricks are pretty darned impressive.

They — kids and adults — love seeing their favorite heroes go up against the requisite villains, so in addition to having those characters we know from Captain America: The Winter Soldiergo up against The Red Skull and Madame Hydra, you can see Iron Man, Hawkeye, and Captain Marvel (getting ready for that 2018 solo film) up against Killian and the forces of A.I.M.

Seriously, I did not think I would ever see the day that I would see A.I.M. in live-action, wearing comics accurate uniforms. Those beekeeper helmets are pretty good at protecting their heads. 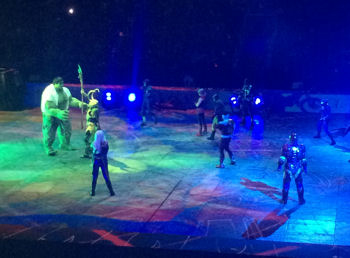 And Spider-Man teams up with Thor against the Sinister Syndicate, with a little help from the Black Cat. The way the show simulates a battle inside the Statue of Liberty is pretty clever, though admittedly the Lizard and Doctor Octopus do not make it to live-action as impressively as one might hope.

Yet somehow, when Bruce Banner finally Hulks out, and it’s obviously an oversized puppet like the Muppets’ Sweetums, we just don’t care. IT’S THE HULK! LIVE! ON STAGE! MAKE THIS A MUSICAL!

Because, actually, it’s NOT a musical, though it’s very well-scored. About the only thing missing from the souvenir stand is a recording of the score, and ironically, that would have been the only thing that I would have had to buy after the show had it been available. I have no place to put a Spider-Man cup nor a toy Captain America on a motorcycle.

But if I had been seven, that wouldn’t have stopped me. I would have absolutely needed that.

You can see for yourself at the official website — if it comes to a city near you, it’s absolutely worth your time. Have fun, and lose yourself in the Marvel Universe.

And for a little taste…