At the risk of sounding like every other nerd journalist — SWEET CHRISTMAS! If ever there were an album worth picking up on yellow vinyl, it is this one. Start the pre-ordering now!

From Marvel and Mondo:

Mondo is excited to unveil the soundtrack for Marvel’s Luke Cage with collectible artwork of the bulletproof hero by Matthew Woodson. Composers Adrian Younge (Something About April) and Ali Shaheed Muhammad (A Tribe Called Quest) have combined forces to produce one of the best scores of 2016 featuring an inspired, genre-bending blend of orchestral score and 90s hip-hop beats, filtered through the sonic lens of the works of Ennio Morricone.

It’s no surprise that the score hovers in the same terrain of the Spaghetti Western soundtracks of Morricone – the narrative of Luke Cage plays out like a modern Western, only set in Harlem. Younge and Muhammad have meticulously crafted one of the most unique sonic landscapes in the history of television.

“We sought to create a score that reflects the world of Luke Cage. We see this world as a place where classic cinema meets classic Hip Hop,” said composers Adrian Younge and Ali Shaheed Muhammad. 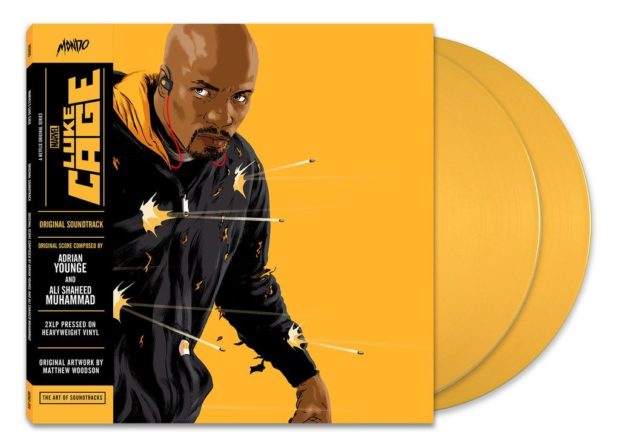 Marvel’s Luke Cage Original Soundtrack Album will be available at digital retailers and streaming services on October 7. For more information, stay tuned to Marvel.com, @MarvelMusicInc on Twitter, and the official site for Marvel’s Luke Cage for all the updates.