In continuity?  I guess if Bamfs (little magical versions of Nightcrawler) can become part of accepted continuity and not just out of a bedtime story Kitty Pryde once told, then Tsum Tsums can fight for justice. They’re everywhere. They’re inescapable. And now they’re in continuity in the Marvel Universe. This is a weird day, and it’s probably a weird book, but it might be fun, too.

The global phenomenon is coming to the Marvel Universe, and they’re getting their own series! Today, Marvel is pleased to announce MARVEL TSUM TSUM #1 – an all-new limited series coming this August! Writer Jacob Chabot (The Mighty Skullboy Army) and artist David Baldeon (Captain America, Web Warriors) bring you an in-continuity tale of these stackable sensations as they come face-to-face with their super hero counterparts, and the Marvel Universe at large!

In case you’ve been living under a rock, Tsum Tsums are HUGE! Well, not LITERALLY (they’re actually pretty tiny) but these cute and cuddly creatures are sweeping the globe. So what happens when the Marvel Tsum Tsums find their way into the Marvel Universe? When a crate of these pint-sized piles of fur accidentally falls to Earth en route to The Collector, one small group of Brooklyn teenagers will find out! Oh – and did we mention the Marvel Tsum Tsums believe they’re the real Marvel Heroes?

“Thanks to all the fans, Marvel Tsum Tsum has been the #1 downloaded free game in Japan for nearly two months,” says Marvel Games Creative Director, Bill Rosemann. “We’re happy to bring that excitement to the limited series along with a set of variant covers based on the unique art style of the game!”

Featuring all your favorite Marvel heroes and villains, this new series is TSUM-thing you won’t want to miss! Get in on all the action when MARVEL TSUM TSUM #1 comes to comic shops and digital devices everywhere this August! 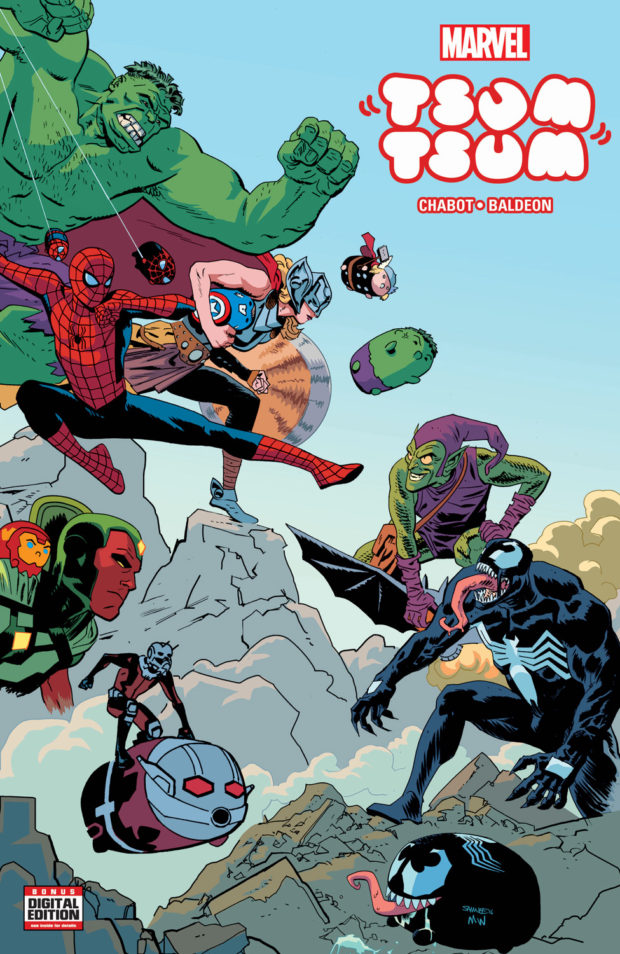 MARVEL TSUM TSUM #1 (of 4)
Written by JACOB CHABOT
Art by DAVID BALDEON
Cover by CHRIS SAMNEE
On Sale in Print & Digital this August!