Fifteen years ago, a charming children’s comic hit the stands, done by animator Mike Kunkel. Making a big splash and self-published by Kunkel’s Astonish Factory, people loved the book but were frustrated by slipping deadlines. Still, Universal Studios snapped up the rights to Herobear and the Kid, the story of a lonely child who discovers that his grandfather left him an incredible legacy — a stuffed polar bear that was secretly the world’s greatest superhero. Kunkel crossed over with Penny-Farthing Press’ Decoy (another character ripe for revival) and then… well, life got in the way.

So it was exciting to hear last year that Boom! Studios was bringing Kunkel back to publishing and reviving Herobear and the Kid. Adding it to the Kaboom! line has been yet another smart move by Boom! When Mel Caylo emailed me before WonderCon asking if I wanted to talk to Kunkel, I almost could not type “yes” fast enough. So on Saturday afternoon, we wandered from the Boom! Studios booth out into a quiet corner of the lobby (yes, in Anaheim there are quiet corners of the lobby) to talk about the revival of Herobear, and his future…

Derek McCaw: What brought you back to Herobear after all these years?

Mike Kunkel: It’s a little bit of right time, right place. It had been tied up a little bit with some rights with Universal and things like that. Life took over, family and job and everything, which still consumes me a little bit. But it was just the right timing and talking with Ross (Richie) and Matt, and kind of just seeing.. Boom! just felt like the right place. It really did.

I kind of tease everybody now with seeing my books on the table with Peanuts and Garfield, if I could tell my ten-year-old self that Herobear would be lying next to them, he’d kind of lose his mind a little bit. I’m very happy with that. It’s wonderful. 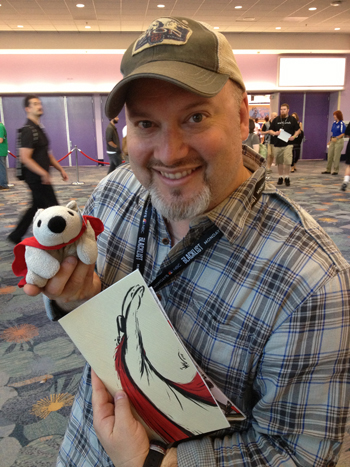 Derek McCaw: As a result of being with Kaboom, do you find that your fanbase is growing out to that kind of recognition?

Mike Kunkel: It is. Well, what’s nice is that there are people who knew of it that are happy to see that there’s more of it. Then there’s people who are finding it for the first time. And I think that because of the Boom! — what I love about Boom! or Kaboom, which is their all-ages line, is that they love all-ages books.

It’s not really so much of “oh, we should do all-ages books” or “we should do books for everybody.” They do them because they love it. And I love being part of that. That feels like a good home for it. And I feel like that’s helping grow the audience (for Herobear) a little bit, because there’s an audience looking for that sort of stuff.

Mike Kunkel: A little. What is cool is that Filip Sablik, who’s come into Boom! in the last year or so, he was my brand manager at Diamond when I first started. So to come full circle and have him at Boom!, he knows, and Matt, and Ross, and everybody there, they know that I approach this not as a creator doing a book, but I still look at it as a little self-publisher, asking “what if we were to do this?” or “what if we were to try this?” Now I kind of have a big brother who can say, “okay, let’s do that.”

So like for one of my specials, I wanted to do an exclusive for San Diego, which is an animation cel cover. It would have been a lot for me to figure that out. they took it on themselves to figure out how to do that, and they did a great job. It was wonderful. I like kind of feeling like I have that big brother. It helps.

Derek McCaw: Helps keep it under control. I remember when it started, what, ten years ago?

Mike Kunkel: First one came out in late 1999, then subsequently from there I stopped publishing five or six years ago.

Derek McCaw: I think I even have the Herobear/Decoy crossover with Penny-Farthing Press. Do you have any urge to cross over with the Kaboom characters?

Mike Kunkel: Possibly, possibly. I teased Mike Mignola about a week ago that I literally had a dream that he and I were sitting around talking, and I convinced him to do a Herobear/Hellboy crossover… 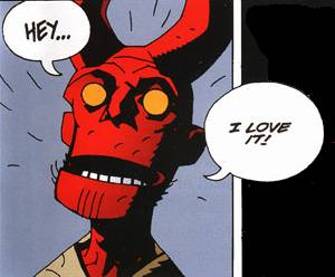 Derek McCaw: I could see it working.

Mike Kunkel: Tyler goes to Europe, on his family vacation, and they fight a ghost at a haunted castle somewhere. Somehow. It’s ridiculous. My whole selling point to Mike was “they both wear red! This is perfect!” And he’s like, “okay. I’m in!” But who knows. For me, I’m just loving doing the books right now. It’s a great home for it. Their support and belief in it has been what makes it easier to do now.

Derek McCaw: For those just discovering it, what inspired you in the first place?

Mike Kunkel: It comes from junior high and high school. I did my own comic strips. I did stuff. I had incarnations of this, and it all comes from “what if your best friend was a superhero?” And that kind of is what sparked it all.

I’ve always loved Stand By Me, A Christmas Story, The Wonder Years, certainly Calvin & Hobbes, Pogo, and old Warner Brothers cartoons, and all that sort of mashed in together and became what Herobear is, and over the years it evolved into this.

Derek McCaw: I’ve seen people call it a super-powered Calvin & Hobbes, but I never really thought that, because I always felt that you had a stronger layer of melancholy underneath it from the beginning.

Mike Kunkel: One of my biggest influences is Stand By Me. It’s Richard Dreyfuss looking back and… you’re sitting with Tyler now, he’s watching this home movie of his life, and he’s narrating it with you. “I remember when I did that.” “You know, when you’re young you don’t think about that…” And it’s that voice that I try and tap into, so it’s sometimes a little melancholy and sometimes a little nostalgia that I really pour into it, because I love that feeling of it. 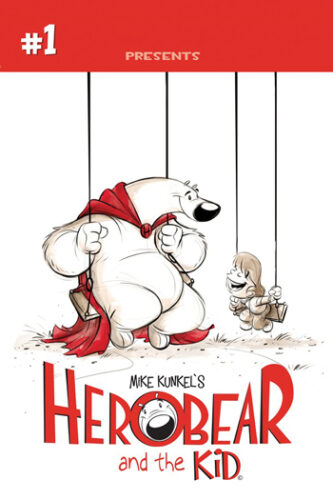 Derek McCaw: For many years, as you mentioned, the rights had been with Universal for animation. Would you still like to see it go that way, or would you rather control it yourself, maybe like a webseries?

Mike Kunkel: Exactly that. I like playing in the sandbox myself with it. Because my background is animation, that’s what I still do as my day job, I work for the studios full time, so it certainly consumes me. But it’s also what I love to do. I would love to do some shorts and some animated stuff on my own.

When you get into the studio stuff, you get too many chefs in the kitchen. If I could just do some little shorts, three minute, six minute, shorts, old school like Warner’s that are simple, just fun little story ideas, that’s probably where I’m heading with it as what I’d like to do. Maybe work with some friends and see if they’d help me out with some stuff. That’s probably the path I’d like to go with animation on it, because I can get more out and I can control it a little bit more.

I’ve never wanted to chase Hollywood with it. That’s never been something that I’ve wanted to… “I’ve got to make a movie out of it!” I just wanted to tell the stories with it. 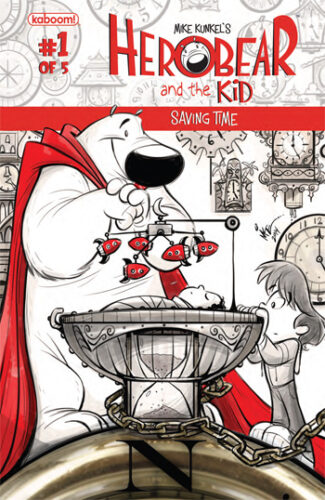 Derek McCaw: Is there a planned end to Herobear?

Mike Kunkel: There’s not an end to Herobear. But the new series, “Saving Time”, is the other side of the coin of the first series, “The Inheritance.” It does bring some things full circle around. It is the other part of the story that I’ve wanted to tell for a long time.

I always tell everybody that the stories that I tell are kind of like in X-Files or Lost or Fringe, there are the, I always call them, the “Bigfoot” episodes and the mythology episodes. The ones that are totally overarching, you’ve got to keep track of everything, and the ones that are just monster of the week. So my Halloween special last year and the Picture Day special last year, I love doing those because they’re just simple one shots. Now with “Saving Time,” it’s a five issue series that’s a companion piece to “The Inheritance,” which was the first five issue series.

But no end to it! It’s just adding more to the mythology. I’m not ending any time soon.

Derek McCaw: Good. Because I’m just so glad it’s back.

Mike Kunkel: I am, too. I’m loving it. I’ll do this for the rest of my life if they’ll let me.

Let’s hope so! Thank you to Mike for his time, and once again to the inestimable Mel Caylo for arranging for the interview.