As I mentioned on this week’s podcast, any writer who could make me care about Black Bolt is a danged good writer. So the news today that Eisner Award-winning and Hugo-nominated writer Saladin Ahmed will be taking over Ms. Marvel is mixed — G. Willow Wilson has carried Kamala Khan through some great stories, and it’s hard to see her go. But Ahmed working with Minkyu Jung — it’s a new (and thankfully clear) era for Ms. Marvel, and for those waiting for the trades, a clean restart as the book gets relaunched and retitled The Magnificent Ms. Marvel.

I’m for it in this case — dividing runs by creators, but also by title changes so that retailers and helpful fans alike can guide new readers to great starting points. And I have no doubt this will be a magnificent starting point.

So when’s the movie?

Marvel is excited to announce that this spring, Eisner Award–winner Saladin Ahmed (Black Bolt, Exiles) and rising star Minkyu Jung (Batgirl, Nightwing) will take the reins of one of Marvel’s most beloved new characters in THE MAGNIFICENT MS. MARVEL #1!

“I think she’s really the face of everything that’s new and fresh and exciting and ‘21st century’ at Marvel, and with superheroes in general. To be given stewardship of that is a big deal to me,” Ahmed told Entertainment Weekly in an exclusive announcement. “It’s always thrilling being given responsibility over a beloved character. It’s particularly meaningful for me to be taking over from Willow.”

“It just seems so incredible that this character, who was just going to be a fun project for both of us loosely influenced by Sana’s own experiences growing up, had become a cultural phenomenon that was going to outlive us both,” current Ms. Marvel writer G. Willow Wilson also told EW. “Given that was true, I really wanted to be cognizant of the fact that superheroes thrive with a multiplicity of voices telling their stories. I wanted to leave on a high note.” 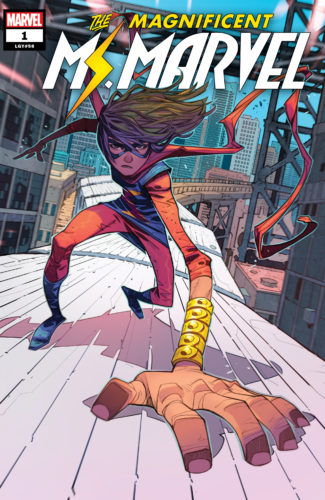