To be fair, MGM announced in Fall 2017 that it would be reviving Orion Pictures as a theatrical distribution company, and Anna and the Apocalypse won’t actually be their first release. That would be Every Day, a YA romance about a young woman who falls in love with a spirit that wakes up in a new body every day. But we probably wouldn’t be covering that one — instead, Anna and the Apocalypse seems more in the Fanboy Planet vein.

Based on the late Ryan McHenry’s 2010 BAFTA-award winning short “Zombie Musical,” Anna and the Apocalypse director John McPhail reset the action of the original short to the holiday season (with McHenry’s input), all the better for Orion to release it sometime around next Christmas. Nothing says heartwarming like warm hearts being ripped out of chests to the beat of some peppy songs. 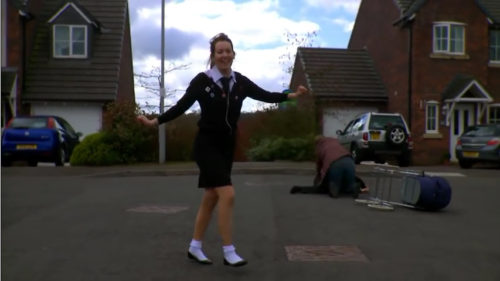 In Anna and the Apocalypse, a zombie apocalypse threatens the sleepy town of Little Haven – at Christmas – forcing Anna and her high school friends to fight, sing and slash their way to survival with a fast-spreading undead horde in relentless pursuit. Teaming up with her best friend John, Anna and her crew fight their way through zombified snowmen, a ravenous bachelor party and high school hormones to try and save family and faculty alike. But they soon discover that no one is safe in this new world, and the only people they can truly rely on are each other.

“Zombie Musical” is a bit unfocused, but starts out a bit like a mash-up of Shaun of the Dead and High School Musical. On his YouTube channel, director McPhail admits that he and his collaborators have learned a lot in the years since. Judge for yourself — it has a few moments of (relatively tame) gore, but most of the real violence occurs off-screen.

It has potential, but it’s no “Zombie Prom,” which I’d love to see get developed into a full-length feature.