While Disney comics inexplicably have seemed to drop in popularity in the United States, they’re still strong internationally, where the comics reading public isn’t quite so focused on superheroes. (Although, to be fair, tastes are changing here, too, and that’s leaving the Big Two scrambling to retool to appeal to a broader base.) Papercutz, a publisher that has been putting out some sophisticated kids’ fare for years, has had a small piece of the Disney market, first with original Disney Fairies books starting six years ago, and now bringing over a series of Mickey Mouse stories from Italy. The timing on the Mickey stories seems perfect. 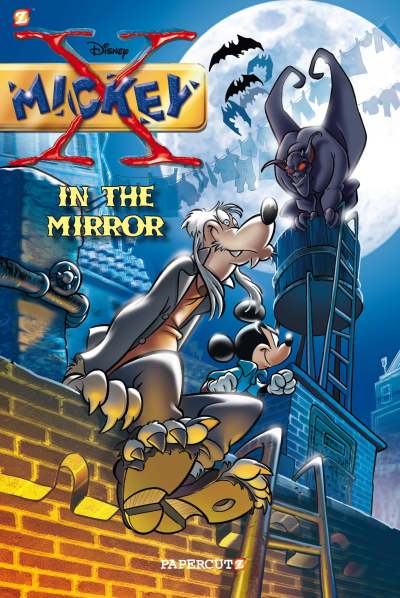 Recasting Mickey as a supernatural detective — or rather, having Mickey stumble into the role — X-Mickey reminds me of the character as he was popular in comics and Big Little Books in the 1960s. He’s an ordinary guy (and in my head, does NOT have the high-pitched voice) who gets caught up in extraordinary adventures. With The X-Files returning on Fox (long may it get renewed!), X-Mickey should be a fun way for kids to share in the light shivers and great fun that the paranormal has to offer in storytelling.

This does mean that in North America, four different publishers are handling Disney material: IDW, Joe Books, Marvel (lightly), and Papercutz. It’s an interesting situation, but who cares who’s publishing it, as long as it’s available?

The world’s most famous mouse has had a long history in comics worldwide. In Italy, Disney introduced Mickey (or Topolino as he is known there) to a paranormal world right under his nose, honing in on the popularity of paranormal fiction (X-Files. X-Mickey..). After picking up an artifact (with an “M” for his girlfriend, Minnie), he is allowed access to The White Mouse Tavern, the gateway to a strange and exciting land. There he finds menacing villains and spooky woods, but also new friends like Pipwolf and Manny who bear striking resemblance to his old friends back home.