At last, Lion Forge gets this action comic to the stands, thanks to their alliance with IDW. Lion Forge announced it two Wondercons ago, and Nate Costs was pretty excited.

The cover looks cool, and the list of contributors makes an impressive pedigree. And he’s a super-werewolf?!?! Could be pretty fun…

Mixed martial arts fighter Quinton “Rampage” Jackson has conquered opponents in the ring and receipts at the box office with his star turn in The A-Team. Now the former UFC Light Middleweight Champion takes on a whole new challenge: giant monsters and super villains. In a new graphic novel releasing today from Lion Forge Comics, Jackson isn’t just a tough street brawler; he’s a super-werewolf fighting for the people.

“The action in this book is more than just punching people, although it’s got plenty of that, don’t worry,” Jackson said. “I wanted to be a real hero like the ones I grew up reading in comics. The threats are larger than life, but it shows kids how to keep standing even when the odds seem to be impossible.”

A series of wild globe-trotting adventures starring a superhuman Rampage and his team of sidekicks, Rampage Jackson: Street Soldier was designed to be a break from the complex continuity and heavy themes found throughout the superhero genre today. Lion Forge recruited a veteran team of superhero creators to make it work, including Fabian Nicieza (X-Men, Deadpool), Mike Baron (Nexus, Badger), Barbara Kesel (Hawk and Dove, Superboy), and artists Leonardo Romero (Batman ‘66) and Fabiano Neves (Army of Darkness).

“With Rampage’s book, we’re giving fans a superhero story unlike everything else on the stands today,” said Lion Forge CEO David Steward II. “People are clamoring for fun, unexpected entertainment that isn’t lost in confusing storylines. This is the one they’ve been waiting for.”

Lion Forge Comics titles (including Rampage Jackson: Street Soldier) are available on all digital platforms, and the print volume, produced with IDW Publishing, is available today everywhere books are sold. 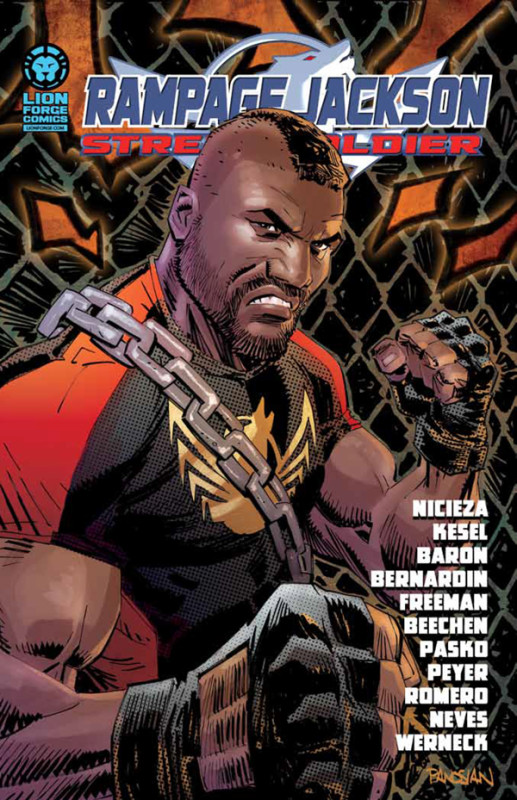