All right. I’ll admit this. If I don’t quite remember Peggy Fleming’s Olympic days, I remember watching her television specials, and that my relatives all thought she was charming and wonderful and it never occurred to me that I lived just a few miles from her when I was a kid. The impression of Peggy Fleming being some sort of idol in my house in the seventies remained.

So when publicists emailed and asked if I wanted to attend a screening of Blades of Glory HOSTED by Peggy Fleming, I couldn’t call back fast enough and beg for a few minutes of her time. Hey, our fanboyishness can’t all be about superheroes and robots.

At the preview screening, Ms. Fleming stood with me in a side hallway and patiently answered my questions. Still charming, still wonderful and managing to do it with very little sleep after the World Figure Skating Championships (hey, we always get sick after conventions — and we don’t actually have to do anything), she then braved an audience invited by local hip-hop station Wild 94.9.

Derek McCaw: How did you get involved in Blades of Glory? You have a cameo role?

Peggy Fleming: Just a small part. I’ve never done anything in the film industry. I don’t know if this is going to be a career move or anything. I don’t think so. But it was fun. My agent just got a call to participate in it. There’s a few other Olympic champions in it as well.

Derek McCaw: So you are playing yourself?

Peggy Fleming: Oh, yes. We don’t have any speaking lines or anything, so it’s just a cameo.

Derek McCaw: So if you’d wanted it to be a career move, where would you go?

Peggy Fleming: I don’t know. I just go with the flow of my career.

Derek McCaw: Between Will Ferrell and Jon Heder, which one would you rather skate with?

Peggy Fleming: They’re both really fun. I mean, it looks like Will might be stronger. He’s taller. (shocked) He’s a BIG guy. It doesn’t come across in movies and things, but you stand next to him and he’s like really big. Very, very tall.

Derek McCaw: Is that an advantage or disadvantage in skating?

Peggy Fleming: It’s kind of a disadvantage. That’s a lot of territory to move around and get tangled up in. Mainly, skaters are shorter.

Derek McCaw: How much time did you spend on the set?

Peggy Fleming: One day. Early call and then you hurry up and wait. (laughs)

Peggy Fleming: Yes, they shot at the end of the day. So we were ready in the morning and we had to kind of just be ready. We couldn’t mess up our hair or sit in our clothes too much. But we had fun. It gave us a lot of time to visit, because we don’t get that many opportunities to just hang with each other.

Derek McCaw: Who of your old friends did you get to see?

Peggy Fleming: Brian (Boitano), Nancy Kerrigan, Dorothy Hamill and that was about our group that day. They do everybody at different times. Scott Hamilton filmed his someplace else. So we had all day to kind of hang out, have lunch, catch up on our families and kids and stuff like that.

Derek McCaw: Can you give us a prediction for skating’s future? Who are the real skaters to watch?

Peggy Fleming: Mao Asada was just fabulous at the World Championships in Tokyo. And Kim Yu-na from Korea. We’ve never really had teams from Korea before.

Peggy Fleming: They just don’t have the instructors, they don’t have the ice surfaces, and people don’t have much money to afford for their child to take skating lessons. It’s a very expensive sport and it takes a lot of time and effort. This young girl is phenomenal. She’s sixteen and she’s got the whole package. She’s got the jump, she’s got the artistry, the beautiful body line – actually, this is both Mao Asada and Kim Yu-Na. But they didn’t win. They came in second and third.

The other Japanese lady Miki Ando won. And Kimmie Meisner, our U.S. girl, came in fourth. She won the world championships last year at sixteen. Everybody learns a lesson, and they’re all preparing, getting themselves ready for the Olympics. 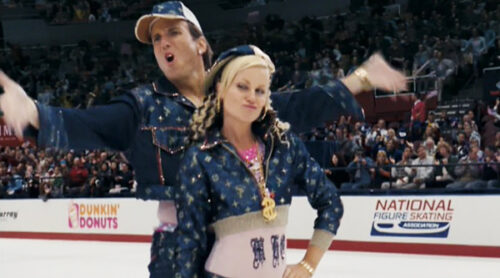 Derek McCaw: You’re hosting a screening of Blades of Glory tonight. How are you going to handle it?

Derek McCaw: Do you think Blades of Glory will spark interest in the sport?

Peggy Fleming: I think so. I just got back from the World Figure Skating Championships in Tokyo two days ago!

Derek McCaw: You must be tired.

Peggy Fleming: I’m a little jet-lagged. It was great, so this is good timing. This is very good timing. You know with all the controversy that we’ve had with our rules and the crazy costumes of yesteryear – they’re still out there – and then the characters we’ve had involved in our sport, I think it’s going to be a fun movie for people to see. We’re poking fun at our seriousness.

Derek McCaw: You have a sense of humor about it.

Peggy Fleming: I absolutely do. You just have to laugh at yourself.