When it comes to something like Star Wars fandom, you may think you know all the stories. Craig Miller’s book proves there’s still more to be told, and in some cases, rediscovered. Working as Lucasfilm’s Director of Fan Relations in the years of A New Hope (before it WAS that) and The Empire Strikes Back, Craig was on set for memorable moments, helping orchestrate a lot of marketing and publicity. To keep Star Wars alive in people’s hearts, Lucasfilm needed Craig Miller, and with his book Star Wars Memories: My Time in the (Death Star) Trenches, Miller pulls back the curtain on a golden time in Star Wars fandom.
For years, I’d read and repeated some of these stories. Craig Miller lived them. 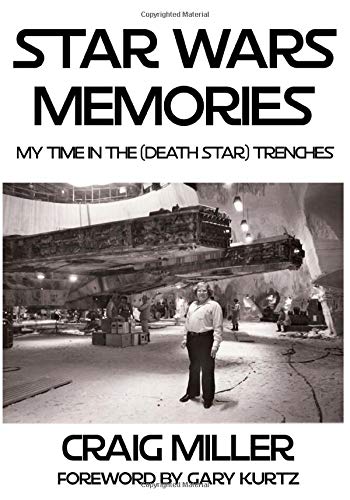 The book dispels some myths, uncovers a secret or five, and revives interviews that Craig did for the official Star Wars fan club magazine, Bantha Tracks. (There are interviews with Mark Hamill and Harrison Ford from 1978 that are amazing from the perspective of 2019.) Miller also includes photos of rare memorabilia and posters, some that he helped design and all that caused a flood of memories for me — and it’s interesting to realize that for the most part, even after the release of Star Wars, nobody really knew how intense the demand was.

As a bonus, Miller has some great candid behind-the-scenes photos both on set and from publicity tours. It’s possible that some of them have never been published before. As he points out, he’s seen variations on some that were taken around the same time, but what he uses here are from his personal archive.

For people IN fandom, this book provides a great view into conventions as they were in the 1970s. It’s a far cry from today, providing an unavoidable disappointment to the book: Craig and his team didn’t know that they were part of film history; they were promoting movies and reaching out to fans. There are very few actual records of those presentations and panels — the photos included with these memories are what still exist, but they’re sparse. It’s heartbreaking realizing there was a Worldcon display in 1979 that nobody from Lucasfilm thought to photograph for the archives. Who knew that we’d be hungering for a glimpse today?

Star Wars Memories delivers exactly what it promises. It’s like sitting down with Craig and listening to him tell stories, sometimes in chronological order, and sometimes in a “oh, hey, you’ll find this interesting” way. It is interesting, and makes for a fun read, easy to take in small anecdotes or just binge through them all, then go back and re-read an interview or two.

Craig went on to work on marketing several other classic science fiction and fantasy films in the 80s, so I join the crowd of voices asking for a follow up book beyond Star Wars.

Fanboy Planet has an affiliate agreement with Amazon and may receive revenue from the purchase of products through Amazon links on this site.