The monsters that stick with us are the ones we can have empathy for. If you watch the Universal classics, you see the Mummy just wants love, Frankenstein’s monster just wants to be accepted, and Dracula… okay, Dracula wants to feed on the world, but dang, he’s sexy. Writer/actor David Dastmalchian gets this: a good monster wrestles with its own inner demons.

Jerri Butler certainly has her own. Working as a news reporter at her family’s Missouri TV station, she struggles with grief and alcoholism. When that leads to an on-air meltdown, her station manager brother has no choice but to fire her from the news. Luckily, he has this opening for a late-night horror host after the previous one disappeared, and so Jerri puts on the make-up of Count Crowley. She isn’t counting on people taking her a little too seriously in the role.

From page one, Dastmalchian and his artistic collaborators Lukas Ketner, colorist Lauren Affe, and letterer Frank Cvetkovic make it clear that all is not what it seems in Jerri’s hometown. She’s stepped out of her studio in 1983 and into a midnight world they didn’t teach about in journalism school.

Those are the broad strokes of Count Crowley Reluctant Midnight Monster Hunter #1, and the telling of the tale is what makes it fun. Dastmalchian has created a complicated lead in Jerri; her inebriated meltdown may be embarrassing, but her instincts as a reporter are right. And for those of us who love late-night horror hosts, her Count Crowley persona is spot on. We don’t watch those shows for the movies themselves; it’s all about the honest wise-cracking and commentary that the hosts bring. (Think Elvira and Svengoolie, but even when they were new to the game, they were carrying on a proud tradition.)

Ketner brings it to life in a way that honors Count Crowley’s other major influence: decades of horror comics. He has his own style and sure storytelling instincts, but there’s an echo of E.C. Comics, with a little Jack Davis and Jack Kamen in its DNA. You can flash forward to see the shadow of Neil Vokes and Hilary Barta, artists who were doing horror comics in the 80s when this book takes place. The most important thing is that Ketner gives as much to the mundane as the monstrous.

We get four issues of this from Dark Horse Comics… so far. As Dastmalchian mentioned in his interview with us, he’s got plenty of stories to tell, if we’ll let him. Pick up Count Crowley Reluctant Midnight Monster Hunter #1 and get on board with the arrival of a new voice in comics who has heard the call of those who came before him… okay, that reminds me that maybe we don’t have empathy for Cthulhu. Do we? 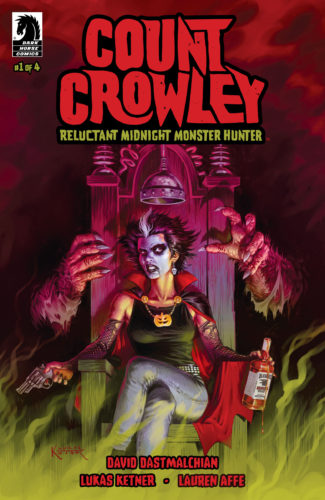