It’s been a long time since I’ve read any books in the pulp tradition, and the vigorous energy of Edgar Rice Burroughs was just what I needed this week to take my mind off the world. Matt Betts captures the rhythms of Burroughs and the mannered diction of his heroes. Diving into Carson of Venus transported me not to Amtor, but to 5th grade, picking up Escape on Venus from the Los Altos library.

Kicking off a “super-arc” that will tie many of Burroughs’ series together, Betts wastes no time getting to the action. Carson Napier is a little older, but still in the process of becoming wiser. His partner Duare often shows more empathy and humanity than Carson does, though he always comes around. 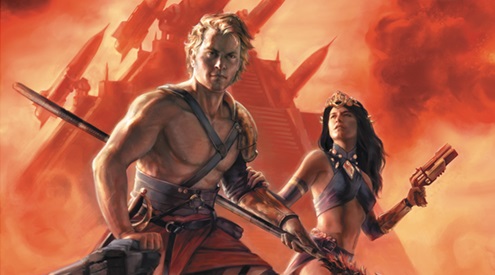 The Venus series was always a little more directly satirical than Barsoom or Tarzan, and though there are touches of that here and there — with great characterization — it’s also clear that this arc is also meant to cast a gently critical eye on these books themselves. When Carson Napier is confronted with technology clearly modeled after his own rocket that brought him to Venus, he has to wonder how unaware his previous adventures may have been.

With the new character Victory Harben, who with Jason Gridley will appear in all of these books, we have a young woman uncovering that we can’t take the old narratives for granted. As noble as Carson Napier, John Carter, David Innes, and Lord Greystoke may be, they’re still unreliable narrators. She’s not just experiencing a wild new adventure, she’s also bringing a new perspective that serves as an introduction to new younger readers and maybe driving them to check out Burroughs’ original novels. 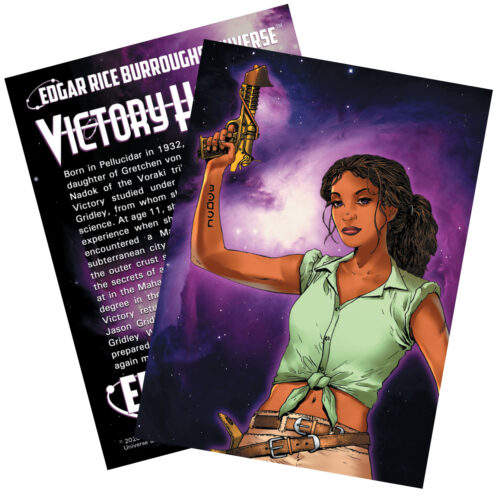 To that end, the real strength is that Betts gives the readers exactly as much information as they need to enjoy the story. For someone like me, yes, I immediately downloaded Pirates of Venus onto my Kindle. But if you’re not like me, you’re still going to look forward to the next novel in this series, coming Summer 2020 from writer Win Scott Eckert – Tarzan: Battle for Pellucidar. Carson of Venus: The Edge of All Worlds is available for pre-order on ERBurroughs.com (and/or Amazon).

Carson of Venus: The Edge of All Worlds will be available Tuesday, April 21, 2020. This review is based on an advance review copy.

All relevant logos, characters, names, and the distinctive likenesses thereof are trademarks or registered trademarks of Edgar Rice Burroughs, Inc. Used by permission.