Within the first few minutes into Kevin Smith’s latest film, detective Jimmy Monroe (Bruce Willis) criticizes partner Paul Hodges’ (Tracy Morgan) movie quoting interrogation technique as ineffective. Hodges then explains to Monroe, that it’s Hom-Age, like a tribute to those who have come before. Before Monroe can explain that Hodges is talking about homage, Hodges is off to question the suspect in a hilarious, movie quoting riot.

In a way, it’s as if Kevin Smith is foreshadowing our movie-going experience with his foray into the buddy cop genre of films made popular in the eighties. Because once Cop Out gets started, it’s nothing but Hom-Age to all the things that made those movies great.

When Hodges and Monroe botch a stakeout with an informant, they’re placed on a thirty day suspension without pay. This poses a problem as Monroe’s little girl (the always stunning, always radiant Michelle Trachtenberg) is set to have a wedding with an enormous price tag. In order to save face with his ex-wife, keep his pride with her new husband (The excellently chest hairy Jason Lee) and pay for the impending nuptials, he is forced to sell his priced possession: a rare, mint condition baseball card.

After the card and Hodge’s piece are boosted by the parkour using Doody Bandit Dave (scene stealer Sean William Scott), Monroe and Hodges find themselves in deep water. The trail of the missing loot leads them to cross paths with the Mexican crime lord Poh Boy (Half Baked and Weeds’ Guillermo Díaz), looking to expand his empire and find his missing Mercedes. 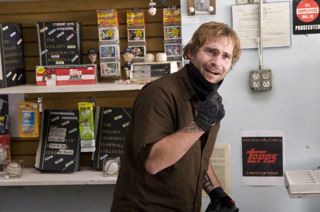 Hodges isn’t without family drama as well. He suspects his all too tasty wife (Rashida Jones) of having an affair with the neighbor. Preoccupied with his brewing problems at home, Hodges finds a distraction with a newly found Latina witness named Gabriella (Nacho Libre’s Ana de la Reguera) and soon finds his own fidelity in question.

All the while, the smart-ass rival detectives to Monroe and Hodges – Hunsaker and Mangold (played perfectly here by Kevin Pollack and Adam Brody) are on the case as Poh Boy and his gang start leaving body after body across the city.

Seeming like it’s a lot to digest, Cop Out plays out surprisingly very well. It might feel like it’s dragging at times, but it’s only to serve the grander story set in motion. There are times when the audience is asked to recall many plot lines set forward from earlier, but in the end it all pays off if you’re mildly paying attention.

And then there’s the homage. Seriously, if you were a fan of all those eighties buddy cop movies (ie, 48 Hours, Beverly Hills Cop, Running Scared, Red Heat, Collision Course) where big action stars were teamed with madcap silly comedians from the day, then Cop Out won’t disappoint. From the second the action starts and the buddy cop synth eighties music starts playing (Smith even brought in Beverly Hills Cop composer Harold Faltermeyer to do the soundtrack) we’re transported to the time of Nick Nolte and Eddie Murphy, Schwarzenegger and Belushi, and Leno and Morita. But the homage of Cop Out doesn’t stop with the music. Pretty much all the beats of this film are straight from those who came before. 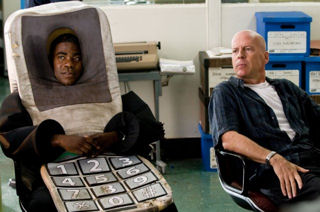 Tough guy cop and hilarious goof off partner (48 Hrs?). Mexican ganglord everyone’s chasing (Jimmy Smits in Running Scared?) Rival detectives where one just happens to be the smart one and the other is the young and impressionable nerd (Taggert and Rosewood in Beverly Hills Cop)? Adam Brody does his best Judge Reinhold I assure you and Pollack is no stranger to the genre (see Ricochet, Clean Slate, and End of Days). Ex-wives, jealous new husbands, pissed off police captains, cheating wives at home, hot rescued hostages, comical criminal informants, and the list goes on for days. Some could argue it’s derivative and unoriginal, but then they probably don’t understand homage.

Smith is a child of the eighties, an auteur who grew up watching John Hughes films and reading comic books. Who better then to resurrect the always crowdpleasing genre of the buddy cop film? What I liked most about Cop Out is that this is not a slick, Michael Bay reboot of the game, but a throwback to what we liked most about these films. When it comes down to it, this is a story about a couple of dicks on a mission. It’s about a couple of partners who’ve had each other’s back for over nine years and this is their latest adventure.

Willis is on cruise control in this one, but only because he’s pretty much the guy who defined the role he’s playing. He’s still effective and strong and his care for the role keeps the story grounded in reality. Morgan is completely out of this world.

In one of his best roles, Tracy Morgan basically is allowed to go crazy in this film and he actually proves why he’s the star everyone has been saying he is. He’s not without fault, and at times the Hodges character is somewhat of a cartoon. But for being the comic relief of this movie, we can forgive him as he has us rolling in the aisles laughing. Most of the other laughs come from the always charming Sean William Scott. The guy is on fire in this film and his confidence in this role is hysterical.

Originally titled A Couple of Cop Suckers, then changed to A Couple of Dicks (as in detectives), Smith had to compromise with the studio and get a more marketable name for this action comedy and in an almost poetic solution, Cop Out was chosen as the title.

What’s also noteworthy is that this is the first film that Smith directed that he didn’t write. However, there is a lot of Smith smeared all over this film in the subtle dialogue exchanges and gross-out, sophomore humor.

As far as what Smith accomplished with Cop Out, he not only achieves success with his first real action movie, but he pulls off a great homage to a lost genre of film that many may have written off as just a fad. Actually, Smith’s love of said genre and his tribute to it here may make some yearn for better days. 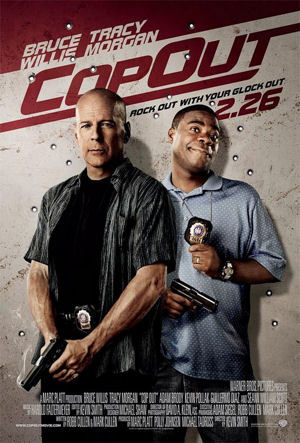