In Hollywood math terms, Dark Shadows would be a no-brainer. Vampires are hot. Johnny Depp is hot. Johnny Depp as a vampire should be the hottest thing in cinema (well, if not for a long-haired Norse god, a green giant, an iron man, etc.). It’s such a no-brainer, nobody has to even try too hard. Well, congratulations, Hollywood, you’re right. Dark Shadows doesn’t try very hard at all.

Let’s go so far as to say that Depp and director Tim Burton had their hearts in the right place. They must have truly loved the original supernatural soap opera in all its cheesy glory (full disclosure: as did both Ric Bretschneider and, when mom wasn’t looking, myself). So the film update feels overstuffed with references to 1972 and the influence of the original in design and perhaps intent.

But it also ambles in tone. Does it want to parody the original? In some places, that’s what comes across, in particular through the screenplay’s cramming of what had to have been a year or two’s worth of subplots into two hours. Plotlines and characterizations pop up and then get thrown away, particularly with Jonny Lee Miller’s Roger Collins, the stock soap opera ne’er do well brother. Miller leers and sneers his way through a few scenes but disappears right after Seth Grahame-Smith’s ham-handed script nails the character down right on the nose.

Perhaps Dark Shadows aspires to be the gothic romance that the original started out to be. Burton begins in the 18th century with the cursing of Barnabas Collins (Depp), a storyline full of grand castle-like mansions, busty wenches and, of course, dark shadows. There Barnabas loves Josette (Bella Heathcote, whose actual name seems like she should be a character in the movie), but had first canoodled with servant Angelique (Eva Green), an angry actual witch who destroys everything Barnabas loves out of scorned vengeance. 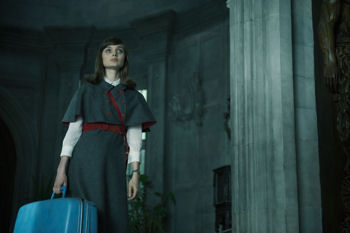 It’s tragic, it should draw in the young women bored by Bella Swan, and it’s all shot with a proper air of unreality, crashing waves and fantastic frills on the costumes. However, Angelique’s curse transforms Barnabas into an immortal vampire – though he mentions that he has studied the dark arts himself, it’s an idea that never really goes anywhere except to make him completely understand and adjust to what has happened to him.

The story hints that he tried to still do right by his family even in undeath. After many years of cinematic misanthropy, Burton has finally adjusted to the idea, here again none-too-subtly harped upon, that “family is the only true wealth.” And two centuries later, the Collins family has fallen on relatively hard times, a shadow of their former greatness, barely subsisting in the ancestral home of Collinwood.

And it is there and then that the mysterious nanny Victoria Winters, also played by Heathcote, enters the picture and serves as little more than just another picture on the wall. Of course Barnabas recognizes the resemblance and realizes that she’s the reincarnation of his lost love, but that’s not important now when there are goofy 70s fashions to parade and a year’s worth of plotlines to condense.

We also get Chloe Grace Moretz as a sullen teen with a dark secret, except that nobody ever bothers setting up that she has a dark secret. Maybe that’s my just being inured to sullen teens. Occasionally ghosts walk the halls of Collinwood, and for reasons likely based entirely on Burton being able to give his childhood idols work, Alice Cooper shows up and proves that looking dissipated as a young man in the 70s does mean you can pretty convincingly still play yourself in a period piece 40 years later.

The actors doing the best job of walking Burton’s tonal line are Michelle Pfeiffer and Jackie Earle Haley, whose Willie Loomis barely understood what was going on in the original soap opera, the original movie based on the soap opera, and the television remake from the early 90s. Pfeiffer continues aging gracefully and quietly reasserts herself as a movie star, while Haley, often one of the best things in whatever movie he’s in, keeps up his streak. 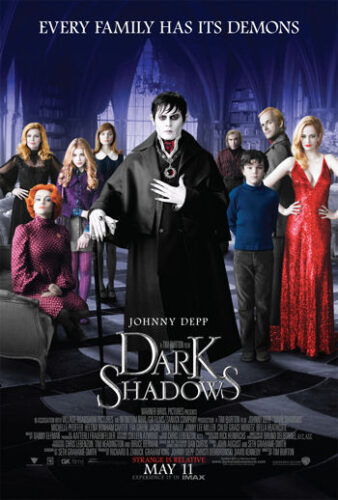 Depp has moments, but he’s often overshadowed by a truly wretched make-up job and the feeling that we’ve seen pieces of this performance before. Burton doesn’t help by stealing shots and rhythms from earlier work – Barnabas’ grand guignol entrance into the 20th century echoes a lot of Batman’s first scene in Burton’s own Batman 23 years ago. And yet Barnabas never becomes a bat.

As fun as some of the collaborations between Depp and Burton have been, what’s truly energized Depp’s career in recent years has been his work with other directors. Throwing Helena Bonham-Carter into the mix, Burton is clearly working with people that make him comfortable, and sure, he’s earned that right. But he could use some new blood, if he’s not going to find new ideas.

Dark Shadows ends up being not particularly dark or shadowy or particularly anything. It feels restrained and a little lazy, which makes for a pleasant enough diversion, but not the kind you’d want to return to again and again. A shame, really, because the one thing it knows it wants to be is a hit.