It was a beautiful day in Snap City, the kind of day that birds sing about if only you’d listen. FBI Special Agents Mike Mattress and Dean Crept weren’t listening as they bounded down the steps of their building, especially not after they got gunned down by an unknown guy in an unidentified car. A mysterious scar-faced figure watched from the shadows with satisfaction. Across town, Crept’s wife got into her car with their daughter, and it blew up. The girls went to heaven; the boys went to hell. And all of this takes place in the opening credits of G-Men From Hell. And appropriately, it’s all told in comic book panels lifted straight out of the source material, Michael Allred’s Grafik Musik.

The live actors show up in Hell. The Devil (Robert Goulet) unloads to his therapist, feeling persecuted that people always blame him for all the evil in the world. Watching from a distance, Mattress (Tate Donovan) and Crept (William Forsythe) hatch a plan. It seems that satanic powers alone don’t quite cut it; The Devil needs a certain crystal to travel to Earth. And he keeps a spare locked away in case of emergencies. 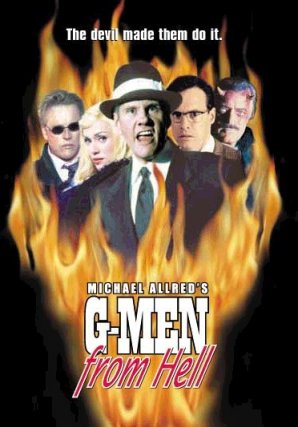 The two G-Men steal the spare crystal, attracting the attention of a zombie (Paul Rodriguez). Quickly making work of him, they teleport to Earth, ending up in the bathtub of a beautiful dame with a Marilyn Monroe complex (Vanessa Angel). Once on Earth, they swear to do a hundred good deeds in order to make their way to Heaven. But first, they’ve got to solve their own murder.

In about a minute, they have, laying it on small-time mobster Buster (Bobcat Goldthwait), killing him before he can kill them again. (It makes sense at the time.) Since they’re considered dead by the bureau, the G-Men immediately open their doors as private investigators. At last they’re free to pursue the actual plot of the film, which involves eluding a very angry yet never less than suave Devil while helping that same beautiful dame from the bathtub get out of a bad marriage that can only end in murder. Of course, it’s not so much the tale as the telling, and G-Men From Hell does that well.

For those familiar with Allred’s work, you know that a wild cast of secondary characters get in our heroes’ way. To complete the G-Men’s hardboiled image, they hire a sassy secretary (Kari Wuhrer) who starts out as a furniture mover. The mysterious Dr. Bouffard (David Huddleston) resurrects Bobcat as a poorly constructed pink robot, aided by his mute henchman (Charles Fleischer) and the evil hand puppet who’s the real brains of the operation. And every now and then the ineffectual and possibly brain-damaged Cheetah Man pops into view, muttering that “evil must be punished.”

Complicating matters further is a police investigation into Buster’s murder. (And how murdering him counts as a good deed for the G-Men never quite gets explained.) The two detectives assigned to the case serve mainly as a distraction rather than a diversion, though Gary Busey strives mightily to make his “sado-masochistic kind of homosexual cop” interesting. At worst, they’re a minor misstep in an entertainingly goofy lounge-lizard thriller. 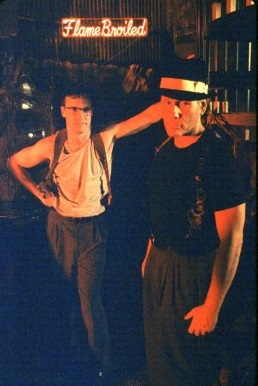 It wouldn’t be hard, in fact, to envision this movie having been made in the early sixties. Like Allred’s comics, G-Men From Hell has a great retro feel. Though there have been good comic book movies before, none have captured the source material so well. The set and costume designs, while simple by low-budget necessity, throb with stylized colors, matching perfectly the work colorist Laura Allred does on her husband’s books. This might have been what Joel Schumacher wanted to achieve with his Batman films, before his nipple fixation took him down. The dialogue pops, though occasionally gets a little too expository. (There’s a lot of weird stuff to explain.) Smooth jazz plays throughout, underscoring the cool factor. If the film had included Snap City’s zombie beatniks, they would have dug that crazy beat.

The actors clearly do. Almost everyone settles neatly into the film’s rhythm. Donovan turns his usual smugness to good advantage here, as a guy who’s been to Hell and back but hasn’t really learned a thing from the experience. As stock noir characters, Wuhrer and Angel both fill their roles excellently, Wuhrer being particularly fun. It’s also a shame that no one has ever thought to cast Goulet as The Devil before.

Of all the actors, however, William Forsythe really stands out. His tough looks usually relegate him to playing heavies, but here he burns with dark dignity. In the midst of a wacky plot, you never lose sight that this guy really wants to join his wife and daughter in Heaven. He knows he has a long way to go, though. Forsythe really should have been born two or three decades earlier; he might have been a bigger star rubbing shoulders with the likes of Bogart and Cagney, two rough guys who knew how to play hero.

With the success of X-Men, Hollywood has gone into a frenzy over comic book properties. The big studios have ignored anything not in spandex. It’s a bit myopic. After all, comics aren’t just about superheroes, any more than movies are just about one-liners and explosions.

G-Men From Hell paves the way for a new wave in comics to film adaptations – those that play the art house (and aren’t originally in Japanese). This is only the tip of the small iceberg.

In coming months, we’ll see Daniel Clowes’ Ghost World on the screen. Another quirky title, Hellboy, is currently in pre-production with the same team that’s doing the higher-profile Blade 2, and director Robert Rodriguez is busy developing Allred’s better known book, Madman, after he finishes his next feature. If you’re interested in reading the comics, the latest issue of Madman features the G-Men. Grafik Musik, alas, is long out of print and hard to find. We hope that changes. We want to know if they ever get to Heaven.