A basic rule in story-telling goes something like this: start late into the action and get out early before you’ve overstayed your welcome. The latest version of Get Carter has the rule a little twisted. It both starts and gets out way too late, leaving the audience a little pumped by some good action, but mostly bored silly by an attempt to sensitize a character that has no business being anything other than a bad-ass.

The still sleepy-eyed Sylvester Stallone stars as Jack Carter, an enforcer for an unseen mob boss in one of Vegas’ sleazier areas. Partnered with a fast-talking John C. McGinley, we quickly learn that his brother Richie has died in a drunk-driving accident, and Carter plans on attending the funeral somewhere in the Pacific Northwest (or it ought to be, for the sun never shines there). The boss doesn’t want him to do that, but hey, it’s Stallone. He does what he wants.

Under a time constraint, Carter takes the train so that he’ll have opportunity to look pensive and troubled. He hangs at the edge of the funeral, and begins questioning his brother’s death. Not very subtly, either, as his sister-in-law (Miranda Richardson) throws him out of the wake for being the only guest speaking audibly. On the front steps of her house, he awkwardly attempts to bond with his niece (Rachael Leigh Cook) before looking for some real trouble.

You see, Richie was the good Carter brother, according to local hood Cyrus (Mickey Rourke). He couldn’t have been too good, though, as he managed a sleazy joint where all kinds of vices can be found. The club’s owner, Cliff Bumby (Michael Caine, the only Brit in the cast kind enough to use his own accent), expresses regret at Richie’s death, but not before giving us the kind of snake-eyed look that Caine can do in his sleep.

Carter’s investigation causes him to cross paths with Geraldine (Rhona Mitra), a hooker with a heart of steel wool. Despite her claims of knowing nothing, and not having any particular chemistry with Carter, she sure shows up a lot. At one point, Carter follows her and Cyrus to a country club, promptly forgetting about them as he encounters local computer software giant Jeremy Kinnear (Alan Cumming). The outrageously dressed Kinnear has no particular social skills and an image to uphold to stockholders, so he turns to Cyrus to get him girls. Somehow, this salient information ties in with Richie’s death, but it takes Carter another hour or so to consider that, even after Kinnear confronts Carter and tells him to get Cyrus for his brother’s murder. 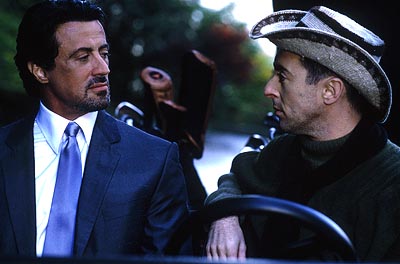 On a side note, it seems that Carter has also been having a fling with his boss’ girlfriend, so now his former partner has been sent after him to kill him. His life just has too many complications.

And that’s where the film really goes wrong. Either a producer or Stallone himself decided to make Carter complex. It’s a new millennium; bad people don’t do good things, do they? Underneath they must like kitties, or something. This guy is a killing machine, or at least set up to be. At least Stallone still has the look; more than once he takes off his shirt to reveal that he’s apparently had fishnets implanted under his skin, so fit to burst are his muscles. He also talks like a Terminator, except when he softens up to try and get close to his brother’s family. While he may be unstoppable, he tries too hard to be clever.

The script, however, doesn’t give him that chance. As written, Carter is just plain dumb. Playing detective, he takes no for an answer at every turn, instead of beating the information out of his informants. This means that he ends up confronting a few characters three or four times throughout the movie until they finally break down, sick of having to look at him. And when he does get information, he ignores it until it starts dancing under his face, jumping up and down screaming, “I’M A CLUE! I’M A CLUE!” Yet somehow this inarticulate man manages to be able to say just the right thing to get his niece (who had not met him before) to share her pain with him. You haven’t lived until you’ve seen Stallone shed tears of sympathy. 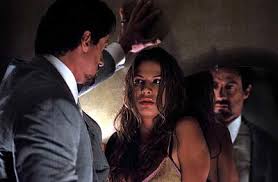 The production values aren’t that bad, either. Director Stephen Kay strives for a cool late sixties vibe, and for the most part hits it. Taking a page from Payback, he’s washed the whole thing in blue, appropriately dulling even the luster of Las Vegas. While not particularly original, the car chases hold our attention. Kay could have afforded to back away from the use of dropped frames in the action, but that’s just one man’s opinion. For all the wasted exposition getting to the last act of the movie, once it comes, it’s fun. But not enough to make up for the journey.

Pity poor Sylvester Stallone. He’s not really as bad as his reputation makes him out to be, and once upon a time he did know how to please an audience. Someday he’ll figure it out again. But in the meantime, instead of getting Carter, get a ticket to another movie.