Sure, the neatly dressed smiling Ice Cream Man on the cover looks friendly enough. The children crowded behind him gazing in anticipation of the cone he holds in his hand look happy enough. But a story about a happy-go-lucky guy driving an ice cream truck probably wouldn’t be a book from Image Comics. Yet that story would probably have made it easier to go to sleep.

Ice Cream Man #1, written by W. Maxwell Prince and drawn by Martin Morazzo, offers the first chapter in a creepy tale about almost nothing being what it seems in the small town of St. Generous. Everybody seems to know Rick the Ice Cream Man, and he seems to be watching out for his young customers. That’s what’s so effective about Prince and Morazzo’s collaboration — you’re not sure who to trust, because everybody doesn’t just look trustworthy, they act trustworthy. Until they don’t.

It’s a horror book, but a surprising one that plays its darkness against the dichotomy of a bright colorful world where no one is afraid of the ice cream man. Skillfully done, Ice Cream Man has one last bit of magic to it — it’s got me hooked and ready for the next chapter to find out just what the heck is going on. I’m definitely back in for two scoops, maybe three. Who am I kidding? I’m ready for a gallon of Ice Cream Man. 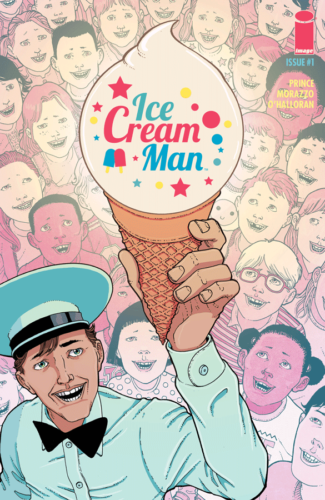