Steve Jobs wishes he were Tony Stark. Sure, the iPad announcement was cool, but if Jobs had actually dropped down from the sky on repulsor rays, the coolness would have been through the roof. In Iron Man 2, Tony Stark (Robert Downey, Jr.) bears some resemblance to Jobs, tightly controlling his technology, deriding attempts at knock-offs and hiding a potentially deadly health problem.

For even as Stark celebrates the ridiculously huge “Stark Expo,” an event that combines MacWorld, the Consumer Electronics Show and the World’s Fair, when he walks into the shadows his cocky smile fades and it becomes apparent that the very technology that saved his life in the first film is about to kill him. Unless, of course, he finds a way around it. If there’s one thing Tony Stark is good at above all others, it’s beating the odds.

So Jon Favreau’s Iron Man 2 doesn’t quite beat the odds in that it’s a sequel that doesn’t quite work as well as the first film. Despite creating a pretty good dramatic arc for Iron Man, it slows down to make sure that it gives nods to all the baggage that comes with being the keystone to the movie Marvel Universe.

Part of that is just the common mistake of comic book movie sequels, overstuffing with secondary characters. Not only does James Rhodes (now played by Don Cheadle) deliver on the promise from the first movie to become War Machine, but Scarlett Johansson shows up as the fully formed Black Widow – though she’s never actually called that.

To keep Samuel L. Jackson happy, Nick Fury has to show up from time to time to remind Stark and the audience that all of this will lead to an Avengersmovie. What Fury doesn’t have to do is add much to the plot of this movie, except to hint that everything is connected.

And it’s not like Favreau and nominal screenwriter Justin Theroux fake those connections, either. When Iron Man 2 pays attention to the narrative, everything does hang together. The film even begins with the ending of the first one, as Mickey Rourke’s Ivan Vanko gives in to his rage that Iron Man may be the result of his own father’s stolen ideas.

Yet some time has passed, and Tony Stark has been a busy boy, intervening in foreign conflicts and working for world peace. It’s not like he created the iPod or anything, but it will do. The federal government takes exception to his playing armored Jimmy Carter, and demands Stark turn over the armor. If he won’t do that, then new rival Justin Hammer (Sam Rockwell) will fill that void.

Of course all forces collide, but the script, infused with Downey’ s constant riffing, is witty enough to distract from how obvious many of the choices are. Of course Vanko and Hammer scheme better together than apart; of course Howard Stark (John Slattery) is too big a figure to be just a flashback. The sins of the past have to have a way of reaching out and throttling the present.

So from time to time the movie drags to feign dramatic impact. After an opening flight, Favreau goes a long while without putting Stark in the armor, or at least not seriously. Luckily, what makes Marvel characters tick is that they tend to be more interesting out of costume, and Downey remains a perfect avatar of that belief. Even in predictable scenes, he plays Stark with verve.

Though they rarely confront each other, Rourke matches Downey really well. Off-screen he may still be a mess, but onscreen he commits to supervillainy in surprisingly subtle ways. Heck, he gets points just for being one of the few actors alive who can throw back his head and scream in rage without it looking silly.

Good thing, because Rockwell’s Justin Hammer is meant to be inefficient and near impotent as a military contractor and as a man, insisting to Leslie Bibb’s returning reporter that he and Stark really have a deep love that’s hidden by Stark’s snide shots at him. In a crucial but minor role, Garry Shandling plays a laughable authority, and there’s just no way that Shandling can be taken seriously. 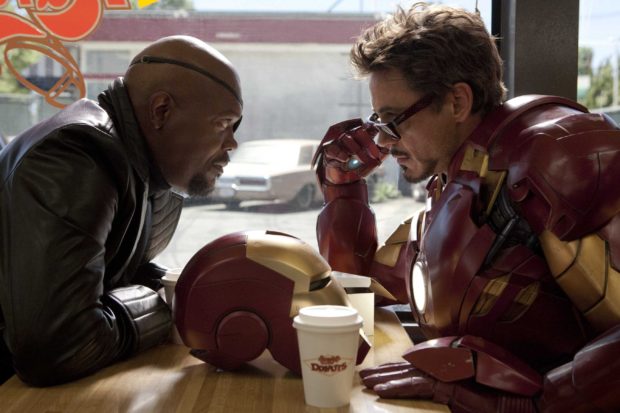 With her martial arts training, “Natalie Rushman” (Johansson) has to be taken seriously, but the movie does not have time to really develop her. Neither Johansson or Gwyneth Paltrow as Pepper Potts get to play too many notes, but at least Johansson scores with some impressive action scenes.

Though it takes a while, Iron Man 2 delivers on those in spades. The intrigue can get put away when it’s time to just cause a lot of explosions. At least Favreau tries to justify them with his storytelling.

Yet it’s all just another chapter in a greater saga that isn’t limited to the character of Iron Man. For fans, this will hold us over until Thor while holding our attention for a little while. Non-fans will still enjoy it, but they may be scratching their heads over certain easter eggs and just what the heck Samuel L. Jackson is doing in this movie.

It’s still a fun enough ride, but it’s mostly a linking piece. Start drooling over the thought of your 2013 Marvel Movie Marathon now.